Category: > Health > The Relationship Between Mucus and Inflammation and 5 Steps to Eliminate It
8.9K shares 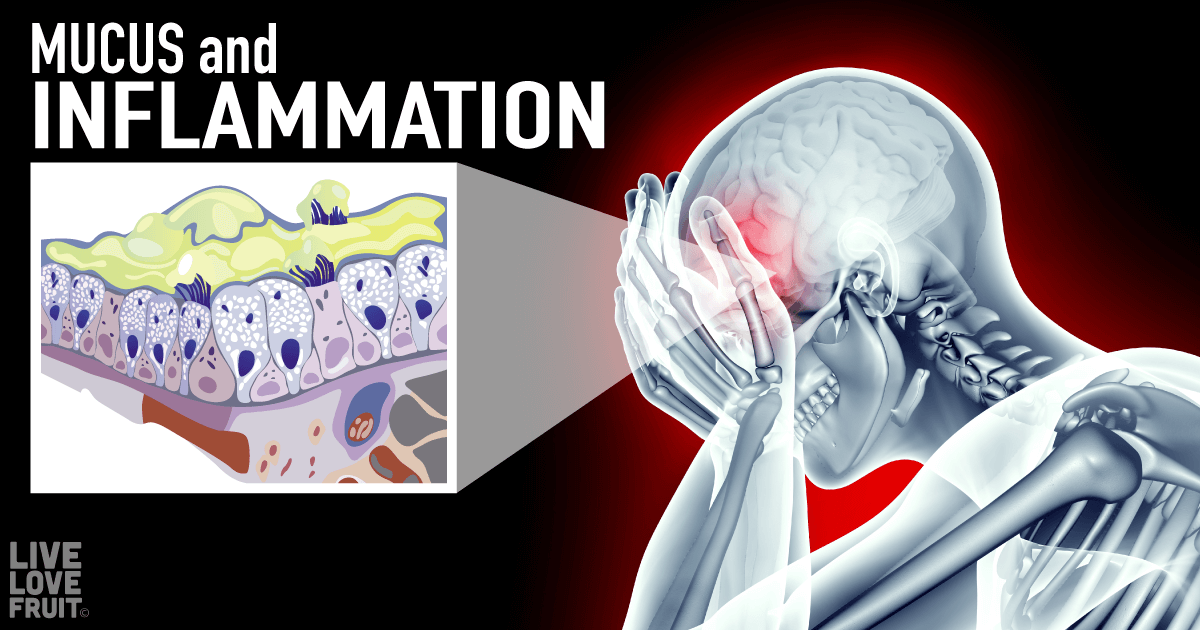 One of the most common questions I get at Live Love Fruit is how to get rid of annoying throat mucus. What many people aren’t aware of is that mucus and inflammation go hand-in-hand, like two peas in a pod. You can’t have one without having the other.

Mucus is produced in the body as a defense mechanism against toxins, viruses, bacteria, yeast, fungus and parasites. It is produced in a dire need to cushion and protect the cells of the respiratory, gastrointestinal, urogenital, visual and auditory systems.

When mucus production becomes chronic, and sticks around for longer than, say, getting over a cold or flu, then your body is telling you it needs a little extra help on your behalf.

When Mucus Becomes A Bad Thing

Not all mucus is bad. In fact, mucus is naturally produced by the body to help protect the delicate linings of our internal system like the nasal cavity and other airways. When air flows through these wind pipes, the mucus prevents them from drying out (likewise, the serous fluid that mucus is mixed with also moistens the air itself before entering the lungs).

Mucus also helps prevent debris from entering the lungs. Any foreign particles that we might accidentally be breathing in (either from a poor environment or being around noxious chemicals like fragrance) sticks to the mucus, and then you swallow it, so that it doesn’t get into your lungs. I’ll touch up more on this later.

When our mucus cells become chronically irritated, however, they start to over-produce mucus. Let’s say you work as a laboratory technician all day and you’re subjected to hundreds of different chemicals in a day. Your body is going to be constantly secreting mucus to protect itself from harm’s way (aka. the chemical invaders). Excessive mucus congests the body, and presents itself as varying health conditions in the body.

When viruses, toxins, bacteria, yeast, fungus, parasites and other undigested food particles enter the body, the body releases its own natural inflammatory mediators, like histamine. When histamine is released, inflammatory mediators cause the blood vessels to dilate and leak, and the mucus glands secrete fluid.

While under normal immune circumstances (like getting over a cold), beneficial mucus is produced to trap pathogens and carry them out of the body. This isn’t the case if we’re consistently producing mucus all the time. When our mucus becomes chronic, the immune system is constantly sensing that it is under attack.

As a result, the immune system goes into over-drive and the white blood cells and cytokines mobilize to protect you (1). When presented with chronic irritants like soy, eggs, dairy, gluten, processed foods or chemicals in every-day products (which lead to un-digested particles in the digestive tract, fungal growth in the body, toxin over-load, etc.), then you get chronic inflammation.

When our bodies get chronically inflamed, the mucus membranes secrete more mucus to protect the delicate membranes lining our organs (2). Therefore, the less inflamed you are, and the less viruses, toxins, bacteria, yeast, fungus, parasites and undigested food particles you have in your body, then the less mucus you’ll be producing as a result.

If we’re constantly producing excessive mucus (like post nasal drip after eating, a constant runny nose, persistent mucus from the nose or eyes, mucus build-up in the back of the throat, or cystic white acne), we need to think about what we are eating, drinking or encountering that may be triggering this reaction.

How To Stop Excess Mucus Production

Aside from reducing inflammation in the body, there are many things we should be doing to produce chronic, excess mucus. Below I’ve outlined some key steps you can take to help reduce the amount of mucus clogging your body.

Food is one of the most abused drugs there are. Most of the foods eaten by society are not at all beneficial for the human organism. These foods are extremely processed, high in cooked fats and refined sugar, and are loaded with chemical ingredients that are difficult to pronounce.

When we constantly eat these foods day in, day out, our body becomes the perfect breeding ground for parasites, yeasts, bacteria and other foreign invaders that inflame the body and cause excess mucus production.

Over-eating also creates the situation where food particles are left undigested. Undigested food particles can trigger leaky gut, whereby foreign substances are then able to enter the bloodstream. The result? Chronic inflammation, which, as you might have guessed, leads to major mucus production in the body.

Instead of non-stop eating, give your body a break by trying out intermittent fasting. This is when you stop eating at, say, 7pm, and don’t eat again until 11am the next morning (16 hour time lapse between your next meal).

There are certain foods that help to heal the body, like living, raw foods. These are the very foods that help clear out the debris, candida and yeast that developed as a result of eating too much cooked, processed foods, and animal products.

Raw, living foods also contain the enzymes needed to break down mucus, as well as the biofilms in bacteria and fungi. They’re rich in hydrating carbons that give you the energy needed to feel fully vibrant throughout the day.

In my personal experience as someone who consumes a high-raw plant-based diet, I’ve had my moments of excess mucus production. After having been strictly raw for several years, I decided to try out some cooked vegan food. When the combinations of ingredients became a little too intense (like trying out some more processed vegan foods), I noticed I had more mucus in the throat than usual. This was to be expected, having come from a very clean diet of only fresh, raw fruit and vegetables as well as nuts and seeds.

Since then, I’ve gone back to eating 98% raw, with some cooked ventures here and there. I am not saying cooked food is terrible, but given my experience, it is interesting that even simple cooked vegan foods would have the effect of excess mucus production in the body. It likely stimulates a mild immune response, given my body is used to eating food with such a high enzyme concentration, where it can easily recognize and digest the foods in their purest form.

*these foods are particularly awesome at dissolving mucus

Enzymes break up the biofilms in bacteria and fungi, as well as break up the mucus that we see in chronically inflamed and sick bodies. Enzymes break up all the junk in the gastrointestinal tract like undigested proteins and carbohydrates. They eliminate the debris, yeast and other toxins in the blood, which normally inhibit the flow of oxygen (which is essential for good health).

As described above, you can get enzymes by consuming plenty of fresh, raw, living foods. Swapping out highly processed foods, animal products and cooked foods for more raw, living foods, is one of the best ways to eliminate inflammation and mucus from the body.

This can be as easy as substituting a smoothie in the morning (with fresh fruit and greens) with a deep-fried breakfast that would continually perpetuate the production of excess mucus. Adding in a green juice to your afternoon can be a quick boost to help get rid of the mid-afternoon slump, while breaking down the mucoid plaques and biofilms that fester inside the body.

Adding in some supplemental enzymes to your diet, in addition to the above, would bring your health up another notch. I personally have had the best success with the enzymes formulated by Puradyme, as they’re designed with the focus on targeting undigested proteins, carbohydrates and fats in the blood.

4. Get in Some Beneficial Probiotics

Probiotics are another great way to help reduce mucus and inflammation. When our gut bacteria is weakened, it can’t protect us from infection and unhealthy bacteria in the body. As a result, we’re left with more mucus than our body can effectively deal with.

Our gut bacteria is weakened when we consume a diet high in processed foods and foods that contain modified ingredients our gut simply cannot recognize. Excess refined carbohydrates and refined sugar can also weaken good gut bacteria, therefore causing the body to produce more mucus as a result.

Getting rid of trigger foods (like those mentioned below), and re-establishing good gut bacteria is essential if you’re wanting to eliminate excess mucus from the body. Taking a probiotic supplement, or consuming cultured foods like sauerkraut, kombucha, water kefir, or fermented coconut yogurt will help restore healthy bacteria levels in the gut.

Last but not least, reducing your consumption of inflammation-triggering foods will greatly help reduce the levels of inflammation in the body. Bacteria, yeast, fungi, and parasites love foods that lower oxygen content in the body and raise acidity levels. An increase in bacteria, yeast, fungus and parasites in the body means the body has to work harder to eliminate them, and as a result, produces more mucus to aid in the process.

6. Do A Chemical Detox

Household and personal-use products contain a host of different chemicals that clog up our system and contribute to mucus and inflammation.

As I mentioned above, mucus helps prevent debris from entering the lungs. Foreign substances that we breathe in (like chemical particles) sticks to the mucus, and we swallow it. When our bodies are constantly bombarded by these particles, mucus production will be at an all-time high.

Unfortunately, many people using the products I am about to list. The good news? There is always a natural alternative.

Drinking enough water is also very important if you want to ensure proper function of every cell and organ in the body. Our bodies are made up of 60% water – that’s a huge percent, given a lot of people barely get enough water to sustain their basic functions every day.

If you’re not drinking enough water, the mucus in your body will thicken and you might experience more of a “mucus sensation” while you’re swallowing than if you were properly hydrated.

Drinking enough water also ensures that all the toxins, debris, bacteria, and viruses are flushed out of the body at a faster rate, instead of giving them the chance to burrow deeper into the cells and organs.

Aim for 3-4 liters of water a day. My rule of thumb is drink 1 liter of water upon waking up. Another liter before breakfast. One more liter before lunch, and another before dinner.