Category: > Health > The Chemicals in Laundry Detergent Are Making Us Sick. Here’s What To Use Instead.
1.7K shares 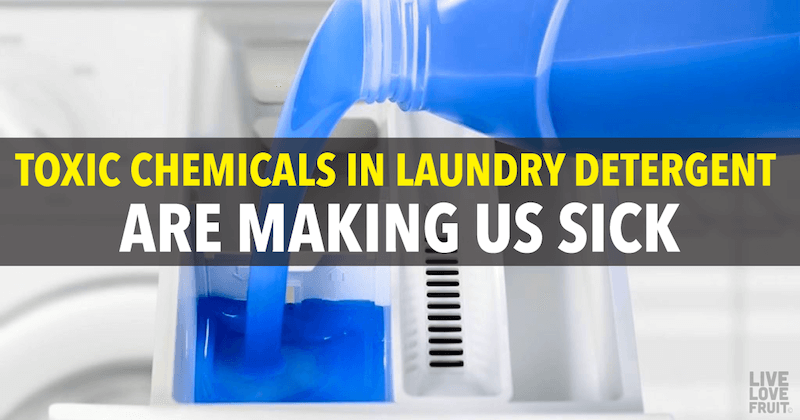 Conventional laundry detergents are like a plague to this earth. Not only do they make humans and other non-human animals sick, but they severely damage the environment.

The chemicals in laundry detergent affect everyone from the user, to the people next door. You know what I’m talking about. Have you ever taken a bike ride or walk through a neighbourhood in the evening and smelled that horrible laundry detergent smell? Its scent travels far, almost similar to the fumes of a cigarette that carries through the air.

So when you breathe in the scent of the laundry detergent you’re using, or if you’re exposed to it from your neighbours, you’re actually getting a lung-full of toxic chemicals.

According to research by the University of Washington, when scented laundry detergents, fabric softeners, and dryer sheets are used, dryer vents emit more than 25 volatile organic compounds (VOCs) per load – many of which are classified as hazardous air pollutants (1). So the laundry chemicals used in conventional laundry detergent can impact the air quality in your home, your health, and even the outdoor air around your house.

Not to mention, the clothes you wear (which carry the toxic chemicals and scents of the laundry detergent) also affect others around you (with chemical sensitivities) and they rub off on your skin, which cause “mysterious” cases of contact dermatitis, rashes, eczema and psoriasis.

The chemicals in laundry detergents include things like fragrances, endocrine disruptors, neurotoxins and potent cancer-causing chemicals. Here are a few you should stay away from.

One of the top offending ingredients in laundry detergent is “fragrance.” If you haven’t read my article on synthetic scents, I highly suggest you do so now. Fragrance is problematic, because over 95 percent of the chemicals used to create them are derived from petroleum (crude oil) (2). These chemicals include things like carcinogenic benzene derivatives, toluene, aldehydes, and many other toxic chemicals that have been linked to cancer, birth defects, allergic reactions and central nervous system damage (3).

The thing about fragrance is that manufacturers don’t need to disclose the ingredients of the fragrances they use (the FDA doesn’t require it). In general, about 3,000 ingredients could be picked from to create a product’s scent – so you can imagine just how many fragrance chemicals we’re possibly exposed to every day.

Most detergent companies have their own “signature” fragrances, which are designed to embed and stay in clothes for weeks, if not months. And the unscented versions? Well, they aren’t much safer. Companies add masking chemicals to unscented versions of detergent to cover up the fragrance with another chemical.

Don’t be fooled by “natural” fragrances, either. A study that analyzed over 25 top-selling products found that those with “organic” and “natural” fragrance emitted just as many hazardous chemicals as conventional products with fragrance. The natural fragrance/essential oils in detergents are processed with solvents, because it is less expensive than distillation. In the study, the VOCs from the solvents were present in every product tested (4).

While bleach is good at getting whites super white, it also comes with some nasty side effects like irritation of the eyes, skin and lungs. A study published in Occupational & Environmental Medicine found that just “passive exposure” to bleach in the home is associated with a greater risk of respiratory illness and other infections in children (5).

I remember when I used to work in a science lab at a hospital (back when I wasn’t so concerned about chemicals – the amount I was exposed to I’m sure I’m still detoxing today), and the bleach was considered one of the most hazardous chemicals. There were some pretty dangerous chemicals in that lab, and I was always puzzled how bleach had such rigorous safety protocols, and yet it is casually allowed in households like it’s no big deal.

Being a chlorinated compound, bleach can produce organochlorines (OC) as it flows down the drain. OC’s are endocrine disruptors, neurotoxic, and carcinogenic (6). Bleach also degrades both synthetic and natural fibres, meaning your clothes will break down at a faster rate.

This chemical has been deemed by the International Agency for Research on Cancer (IARC) as “possibly carcinogenic” to humans (7). This chemical is used to produce softer, sudsier detergents – and it isn’t even an international ingredient, but rather, a byproduct of ethoxylation. Since it’s not technically an ingredient, it doesn’t have to be listed on product labels.

The U.S. federal regulation systems consider dioxane so potent, that it is equivalent, if not more dangerous of a threat to humans than most pesticides used on crops. Detergents contaminated with 1,4-dioxane also have traces of other contaminates like formaldehyde, nitrosamines, and phthalates.

This chemical never breaks down, either. Not even water filters can remove it (and it isn’t biodegradable). To avoid 1,4-dioxane, the Organic Consumers Association (OCA) recommends avoiding products with indications of ethoxylation. If there are any of the suffixes in the ingredient list that contain any of the following, please avoid buying it (8):

These chemicals are common ingredients in most detergents, as they give people that satisfactory sudsing confirmation that their clothes are, in fact, getting cleaned. While this is largely a myth (you don’t need a product to “suds” in order for it to be clean), most people still buy into it. Thousands, upon thousands of research studies on SLS have linked it to irritation of the skin and eyes, organ toxicity, developmental/reproductive toxicity, neurotoxicity, endocrine disruption, ecotoxicology, and biochemical or cellular chances, and cancer (9).

Phosphates break down dirt particles and remove stains by softening the water and allowing suds to form. They are the main ingredient in most detergents, but also come with some hefty health and environmental risks. Phosphate residues are known to cause nausea, diarrhea, and skin irritation. They also remain active even after wastewater treatment – meaning they end up in rivers, and lakes, where they act as toxic fertilizers. Phosphates increase algae growth, and as the algae die, they release poisons that further deplete oxygen in the waterways (this is a huge problem in the lakes in Manitoba).

Other ingredients to look out for include optical brighteners, nonylphenol ethoxylates (NPEs), linear alkyl benzene sultanates (LAS), petroleum distillates (like napthas), and phenols.

The use of all of these chemicals is a major problem. Scientists are now directly linking the alarming rise of degenerative disease in America to exposure of chemicals in our homes and workplaces (10). Exposure to chemicals in our homes is also a major contributing factor to cancer. The American Cancer Society states that in 2018, one in three men and one in two women will have cancer in their lifetime – does that mean that soon everyone will have some form of cancer?

How To Make Your Own Natural Laundry Soap

Making your own homemade laundry soap isn’t very time consuming or costly. This recipe uses essential oils that I particularly like the smell of, but you can use whatever essential oils you love the most!

1. Combine all of the ingredients and store in a large-mouthed glass jar (or other air-tight container).
2. For a large load, use 1/4 cup of the soap. For high-efficiency washes, you may want to adjust the amounts, and wait until the water runs through the soap dispenser to administer the soap.

While you can set aside some time to make laundry detergent, not all of us have the time to do so (or the energy). For times when you just don’t feel like making your own, or if you need to go travelling and need something more convenient, there are safe natural options.

The eco-friendly brands below all received an “A” by the Environmental Working Group:
– Emma Eco Me Detergent – cleans up to 64 loads for $12.
– Planet Natural Detergent – relatively eco-friendly, and cost effective at $9 for 32 loads.
– Zum Clean Laundry Soap – you can get up to 32 loads from a 64 oz. bottle ($21)! Good scents to boot!

Disclosure: Some of the links above are affiliate links, meaning, at no additional cost to you, Live Love Fruit will earn a commission if you click through and make a purchase. This is what keeps Live Love Fruit running as a free resource!