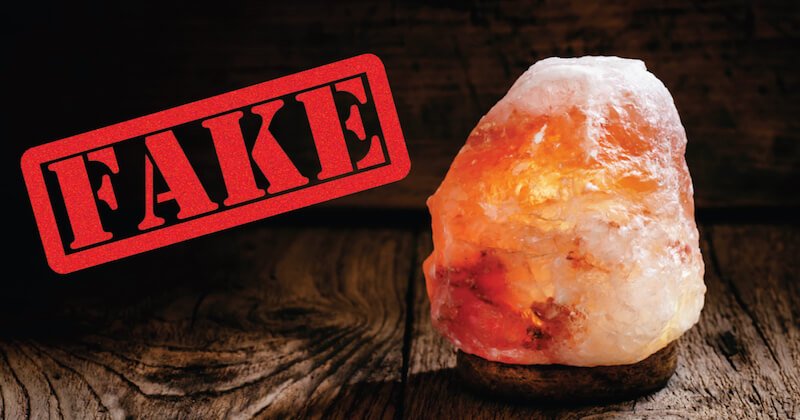 If you’re on the market for a Himalayan salt lamp, you want to make sure you’re not being cheated. Due to an increase in demand, many people are unknowingly purchasing fake Himalayan salt lamps. The rise in popularity has given unscrupulous vendors the chance to cash in, by selling counterfeit, inexpensively manufactured lamps.

Unfortunately, fake Himalayan salt lamps do not offer the same benefits to your health like real salt lamps do.

Real Himalayan salt lamps help purify the air by attracting water vapour and absorbing pollutants like allergens, mould and bacteria. They are also great at eliminating electromagnetic frequencies (EMF’s), which are known contributors to fatigue, stress, and a poor immune system.

So, as you can see, if you’re purchasing a fake Himalayan salt lamp, you aren’t going to be receiving any of these benefits.

7 Sure Signs Your Himalayan Salt Lamp is A Fake

While it might not always be obvious, here are some ways to tell if your Himalayan salt lamp is a fake.

Real Himalayan salt lamps are made of salt, so you can imagine just how fragile they are. Suppliers of genuine salt lamps know this, and as such, their return policies are flexible (after all, there could be damage in transit). If a salt lamp’s manufacturer is extremely strict (like a “NO RETURNS” policy), then it should make you weary of their operations. While this might not always be the case, many companies selling fake Himalayan salt lamps have been known to not allow any returns, because they know they’re not giving you the real thing.

2. You’re Not Experiencing The Health Benefits

If you’re not experiencing any of the health benefits that salt lamps provide, you might not have a real salt lamp. However, this is also dependent on the size of salt lamp you’ve purchased (for whatever size room you’re using it in), and if you’ve been exposed to it on a regular basis. If you’ve follow the salt-lamp sizing and exposure rules, and you’re still not experiencing benefits, it’s possible your lamp may be a fake.

3. Your Lamp is Extremely Durable

Genuine Himalayan salt lamps are extremely fragile! It’s very common for these salt lamps to damage during shipping due to poor packaging or improper handling. I’ve actually damaged my salt lamp a few times by banging it against a wall, and chunks of salt have fallen off. If your salt lamp is unaffected by accidental collisions, it is likely that your salt lamp is a fake.

4. The Light is VERY Bright

If your salt lamp is unusually bright, it is likely a fake. Because of the high concentration of minerals in genuine salt lamps, the light they give off is irregular and muted. Himalayan salt lamps typically only emit a soft warm glow – not enough light to illuminate an entire room. If your lamp is small, but does have the ability to light an entire room, it is a pretty good sign that you have a fake Himalayan salt lamp.

Himalayan salt lamps, by nature, work by absorbing water from the air around them. By doing so, they also tend to sweat when exposed to high moisture (like really humid days, combined with the heat of the light inside the crystal). If you lived in a particularly moist region, and your salt lamp has never “sweat” before, it is a pretty good sign that your Himalayan salt lamp is a fake.

6. White Crystal – But Not Too Expensive

Many Himalayan salt lamps give off a warm pinkish or orange hue. While these are still moderately priced, there are much more expensive Himalayan salt lamps that are white (a lot more pricey than the coloured ones). If you find a white salt crystal lamp that isn’t substantially more expensive than the pink/orange versions, it is likely an imposter.

7. No Mention of Pakistan