Category: > Remedies > Don’t Be Fooled. Fake Honey Is Everywhere! Here Is How To Detect It (And Brands To Avoid)
15.5K shares 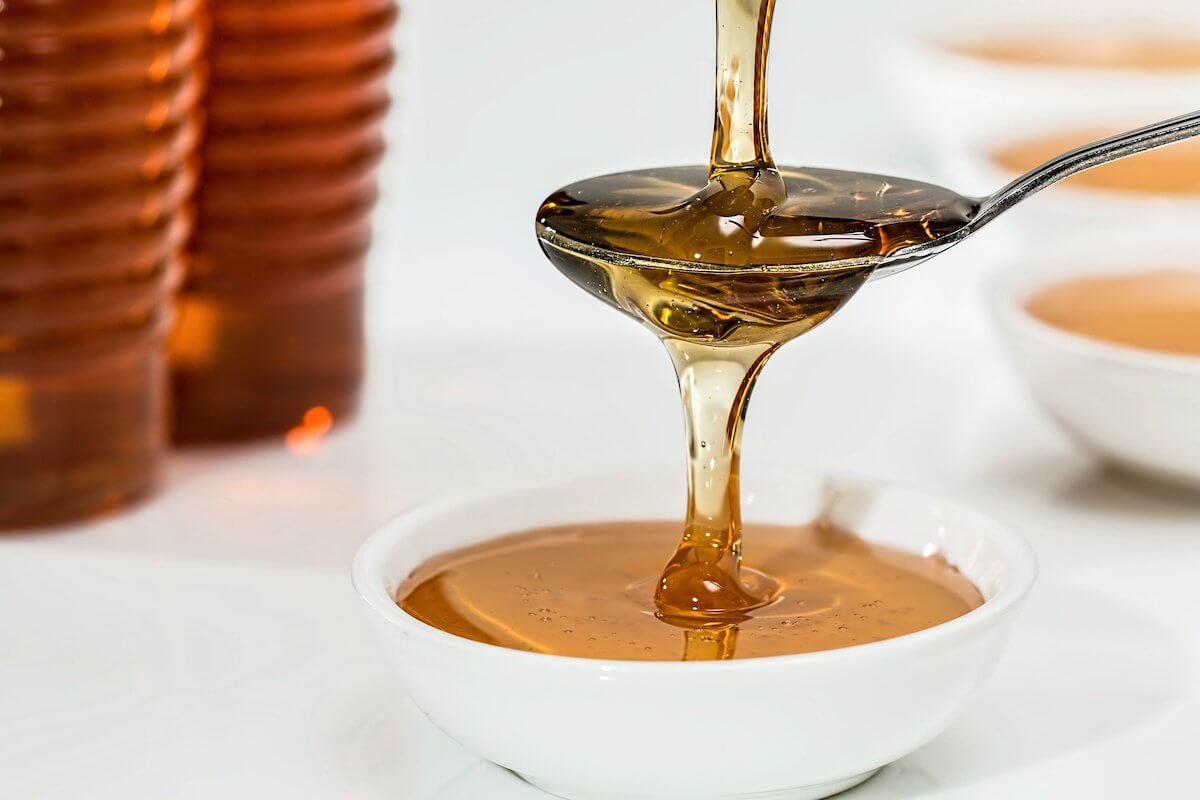 After my post about fake olive oil (over 70% of all store-bought extra virgin olive oils in the US are fake), I’ve finally decided to delve into the world of fake honey.

Have you ever taken a walk down the grocery store isle that shelves honey? Well, to tell you the truth, not all honey is created the same. In fact, most of the honey you buy at your local supermarket is not much healthier than refined white sugar (especially cheap honey), and a lot of it is manufactured in China, where regulations on health and safety are lax, and in many cases, non-existent.

And I’m not just talking about the fake “honey” single-serving packets in restaurants and cafeterias (aka. honey-flavoured corn syrup), I’m talking about actual honey marketed and priced just as high as the real stuff. I remember being told at a farmers market once to never buy grocery store honey, and always buy local. The person never really mentioned anything about fake honey, but he did mention that local honey contains pollen from plants in your area, and can help reduce allergies to those plants. Since then, I never went back to store bought honey.

However, most people aren’t buying their honey from farmers markets, and instead opt for the honey found among rows and rows of non-local honey in the supermarket. These honey’s aren’t safe, and they’re almost guaranteed to be fake.

But before we talk about fake honey, let’s look a little into the history of honey itself.

Honey, otherwise known as liquid gold, is one of nature’s purest foods. Raw, unpasteurized honey (honey that has not been heated, and still contains all of its beneficial nutrients and enzymes) contains a whopping 22 amino acids, 27 minerals (like calcium, iron, iodine, manganese, phosphorous, zinc, potassium, calcium, magnesium, and selenium), and vitamins like vitamin A, C, D, E and K, as well as the entire B-complex. The live enzyme content of honey is also one of the highest of all foods. Not to mention, it is highly anti-microbial, anti-bacterial and anti-viral (1).

Honey has been around for centuries both as a sweetener and healing agent. Back in ancient times, honey was mainly used in religious ceremonies to pay tribute to the gods, as well as to embalm the deceased. Only those who were wealthy could afford to use honey in food.

The ancient philosophers, Aristotle (384-322 BC) and Aristoxenus (320 BC) even touted the benefits of this golden elixir. Aristoxenus claimed that “anyone who eats honey…for his daily breakfast will be free from all diseases throughout his lifetime (2).”

The father of medicine, Hippocrates, also used honey as the foundation for many of his medicinal concoctions. As the healing properties of honey became widely recognized, its production flourished. It was even used on the battlefield in World War I in a medicinal wound cleaner (Dakin’s Solution) invented by the chemist Henry Drysdale Dakin (3).

However, as honey production soared, so did the ways in which it was manufactured. Today, most honey on the market is so over processed and pasteurized at high temperatures that little, if any, healing properties are left over.

According to the FDA, as well as the food safety divisions of the World Health Organization (WHO) and the European Commission (EU), in order for honey to be considered authentic, it must contain pollen. If honey does’t contain pollen, it isn’t real honey, but fake honey. Without the presence of pollen, the FDA cannot determine whether the honey is from legitimate and/or safe sources (4).

With this in mind, Food Safety News decided to test over 60 different samples of store bought honey for pollen – and the results were astounding.

Over 76% of grocery store “honey” had NO pollen in it! These were stores like TOP Food, Safeway, Giant Eagle, QFC, Kroger, Metro Market, Harris Teeter, A&P, Stop & Shop and King Soopers.

Over 100% of honey from Walgreens, Rite-Aid, and CVS Pharmacy had no pollen.

77% of honey sampled from stores like Costco, Sam’s Club, Target, and H-E-B had the pollen filtered out.

Fortunately, honey sold at farmers’ markets, natural food stores, and honey you receive from local bee keepers is loaded with pollen. You just need to make sure that it was sourced from a single farm or small co-op of farms.

Commercial honey sold in supermarkets are ultra-filtered, a process that involves heating the honey to high temperatures that kills off any beneficial nutrients and enzymes, adding water to dilute it, and then filtering it using high pressure technology to remove pollen.

This technique is similar to the one used by China and India, who export tonnes of tainted honey, which leaves officials unable to track its origins (5).  According to Food Safety News, 60% of imported honey comes from Asian countries that are traditional laundering points for Chinese honey.

In the normal honey-making process, honey is filtered to remove bee parts, waxes and other debris. This filtration process does not disrupt the nutritional value of the honey, however, as almost all of the pollen remains intact (thereby making it much more shelf-stable). This is much different from the high-temperature, high-pressure extraction process whereby all of the pollen is removed.

Below is a list of honey tested by Food Safety News that showed no traces of pollen. This list is not all-inclusive, as not every brand has been tested:

Hiding The Origin of Honey

Companies try to hide the origin of honey, because they don’t want consumers to know that it likely came from China. Honey from China, as mentioned above, is over-processed, but also diluted with high-fructose corn syrup and sweeteners, as well as tainted with chemicals, heavy metals, and antibiotics.

In 2001, Chinese beekeepers had their hives inundated with foulbrood disease. They fought off the disease with strong animal antibiotics like chloramphenicol, a carcinogenic antibiotic that has been banned by the FDA. The FDA has since confiscated over $32,000 worth of imported Chinese honey contaminated with this drug – however, the FDA only tests about 5% of imported honey, so who knows how much tainted honey actually gets through to North America.

How To Recognize Cheap, Knock-Off Honey

Use this guide to determine if your honey is fake (7):

– Always read the label; if it contains added glucose or high fructose corn syrup, it is not real honey.
– Taste your honey; if you can taste hints of flower or herbs, you know it’s real honey. Fake honey is just sweet, with a very faint “honey-like” flavour.
– Put a small drop of honey on your thumb. If it spreads it is not pure, since pure honey should stay in one place (by small drop, I mean the size of the head of a q-tip. Obviously liquid honey from the farmers’ market is going to be runny).
– Add a few drops of vinegar into a mixture of water and honey. If it foams up, your honey has been adulterated with plaster!
– If your honey does not “crystallize” with time, it is likely ultra-filtered, since pure honey will crystallize when you keep it in your fridge, or left at room temperature for an extended period of time.
– Add a few drops of iodine to a glass of water and then add some honey. If your honey turns blue, it has been combined with corn starch and is not real honey.
– Place a dab of honey on the end of a matchstick and light it. If it ignites, it is pure.
– Place a spoon of honey in a glass of water. If it dissolves right away, it is fake. Pure honey will not dissolve in water and will sink to the bottom of the glass (without rigorously stirring, of course).

Where To Buy Real Honey

Stick with buying local honey from a single farm of small co-op. This way, you will have peace of mind that your honey is real and unadulterated.

If you have a hard time finding local sources of honey, stick to organic store-bought honey from a local health food store. This way, you’ll have a much higher chance that the honey you’re buying is real.

According to the study performed by Food Safety News, only 5 out of 7 organic honeys contained pollen (28% failure rate). If this number is too high for you – get to a farmers market and find a reputable honey source.

So, the next time you find yourself in the honey aisle of your grocery store, debating on whether you should break the bank on the pricy premium, artisanal honey, or the store-brand liquid gold found in a plastic bear, you should probably think twice. If you can, stock up on honey from local bee keepers – this stuff can be found at farmers’ markets, or if the honey you’re getting is local, you can be guaranteed that it’s loaded with the good stuff.