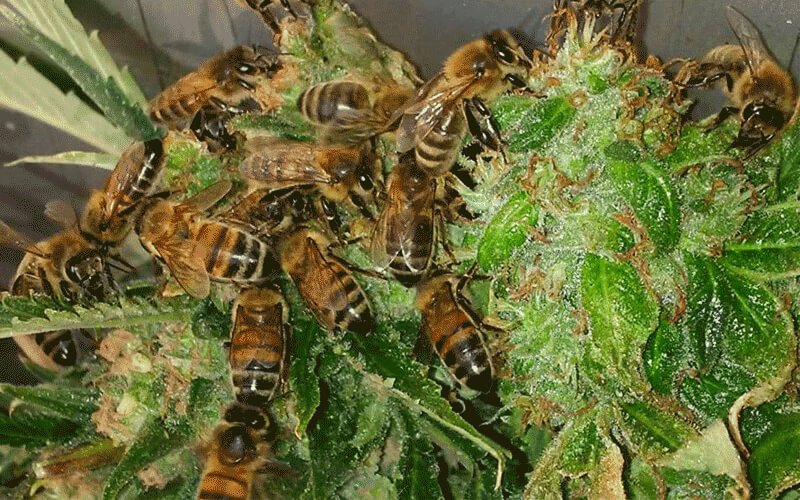 Many people are calling the man who trained bees to make honey from marijuana (“cannahoney”) a genius, as he has been the only person to successfully pull it off.

A French beekeeper and marijuana activist, who calls himself Nicolas Trainerbees, has become a viral sensation after posting a video, which shows his bees feasting on marijuana flowers.

Nicolas has accumulated over 10,000 followers on Facebook, and over 1,000 followers on Instagram, after the 39-year-old Frenchman trained his bees to make honey from cannabis. He spent nearly seven years trying to combine his love of weed and beekeeping, and only in the last couple years did he become successful doing so.

Although some people have casted doubts on the claims, experts have insisted that it is entirely possible that bees could create “intoxicating” honey.

“I have trained bees to do several things, such as collect sugar from fruits, instead of using flowers,” Nicolas explains (1).

Nicolas calls the cannabis honey produced by the bees, “cannahoney,” from a “training technique whereby the bees collect the resin and use it in the beehive.” The final substance, he explains, is the sole work of the bees. They process the cannabis resin in the hive as if it were normal nectar. “For some time, I had known about the health benefits of bee products such as honey, propolis, pollen, wax and royal jelly, and also about the benefits of cannabis,” he said.

While any individual who ate the honey would end up mildly affected by the different cannabinoids, the bees are not affected.

“The bees that produce the cannahoney are not affected by cannabinoids, because they do not have an endocannabinoid system,” said Nicolas. Essentially, cannabis is just another form of food for them.

“Bees could collect cannabis pollen, which would potentially be intoxicating…You do find pollen in honey…Having seen the video – the bees are foraging for nectar, which contains lots of secondary metabolites, not just sugar, and could potentially be intoxicating….Honey produced from bees foraging on rhododendrons in the far east is known locally as ‘mad honey’ as it is toxic to humans.”

Cox said that cannabis plants use pollen to reproduce in a similar way to plants such as a nettle, but this pollen is often removed from commercial forms of honey.

The director of public affairs at the British Beekeepers Association also told Mirror that it was entirely possible to train bees to look for certain compounds, it would just take a lot of time and dedication to do so. Training a bee involves putting chemicals in sugar syrup, so that the bees get a taste for them.

“I can believe that if, for instance, cannabis extract is put in syrup and fed to bees, they might just be fooled into going looking for it,” he said (2).

If you look at the benefits of cannabis and honey separately, you can be rest assured that the two of them combined would provide some powerful healing potential.

Cannabis has been proven time and time again to help eradicate cancer cells, while honey is a powerful anti-viral, anti-bacterial, anti-fungal, and one of the best immune system strengtheners around.

Nicolas says that “everything that passes through the body of a bee is improved,” since their enzymes make the nectar turn into honey (3). This process allows our body to better utilize the compounds of the cannabis plant.

Eating cannahoney will also help your body relax a little bit. While it won’t make you totally high, it’ll give you a minor buzz and allow you to relax and de-stress. As we all know, stress is the number one killer in America, so keeping it to a minimum is crucial if we want to live long, happy lives.