Category: > Remedies > The Smell Molecules of Cannabis and Their Medical Properties
160 shares 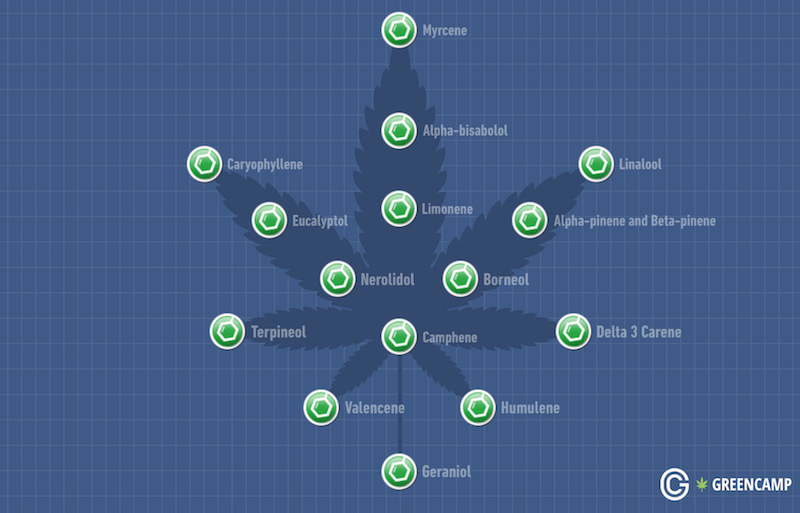 You have to agree that cannabis has one of the most recognizable and unmistakable smells in the world. Once it’s out there in the air, almost everyone can recognize it from a mile away.

But have you ever wondered what makes cannabis smell so unique?

Compounds that give cannabis its signature scent are terpenes, aromatic molecules produced inside the resin of flowers. They are among the major chemical components of almost every plant in the world (even some animals have them, but those are mainly insects).

Although they are still not a household term (and are even a mystery for many regular cannabis users), terpenes are undoubtedly the second most important group of beneficial compounds in the cannabis plant, just after cannabinoids.

What Are Terpenes Exactly?

Not all terpenes are exclusive to cannabis, although some of them are. There are more than 20,000 unique terpenes found in nature and they play a very important role — they protect plants from certain predators by helping them produce a distinctive smell.

Although the term terpene is often used for both terpenes and terpenoids, there is a difference. Terpenoids are closely related to terpenes but they are actually oxygenated derivatives of terpenes.

Terpenes in cannabis are not just about smell and taste. In fact, these little chemicals have found their place in modern, as well as alternative medicine. They are also used in cosmetic and cleaning products, and are well present in perfumes and flavorings. Finally, you can even find them in your kitchen, in spices like rosemary, basil, parsley and many more.

Let’s now talk about what terpenes do and how they react with our endocannabinoid system.

Besides producing many scents and flavors of cannabis, terpenes also help produce health benefits by acting like cannabinoids. They activate the same receptors within our endocannabinoid system (CB1 and CB2) and, by doing so, they amplify the positive effects of cannabinoids.

They do this through a phenomenon called the “entourage effect”, which explains the way cannabinoids bind with each other and other chemicals (including terpenes) to enhance their effects. Also, terpenes can influence the production of neurotransmitters like dopamine and serotonin.

There is a terpene in the marijuana plant called myrcene, which can also be found in mango. Therefore, if you eat a mango about 30-45 minutes before consuming cannabis, myrcene can enhance your “high”, as well as improve the therapeutic effects of marijuana.

Although all cannabis strains mainly have that specific pungent scent, some strains often smell fruity or citrusy, while others a bit more earthy. That is because each strain has a unique terpene profile, contributing to its signature smell. Terpenes are also the reason why different strains affect our mood differently and have different medical properties.

There are more than a 100 terpenes in the cannabis plant, and the interactive visual guide (below) explains the role of 15 most common terpenes found in marijuana.

As mentioned above and shown in the infographic, terpenes have a wide range of therapeutic benefits.

For example, pinene has antimicrobial properties but also helps in fighting infections.

Limonene, with its antifungal and antibacterial effects on humans, is also used to help those suffering from depression and Crohn’s disease.

The most common terpene in cannabis, myrcene, reduces inflammation and chronic pain. But because of its strong sedative properties, this terpene is usually the one that is responsible for the, so-called, “couch-lock” (meaning that you are more likely to be so high that you will not want to get up from your couch).

Humulene, also found in hops, sage, and black pepper, is known for suppressing appetite, a virtue that can be very useful in weight loss diets. Likewise, it’s great for fighting bacterial infections.

Cannabis does not have high levels of eucalyptol terpene, but it’s present to some extent. This terpene can be found primarily in the eucalyptus tree, and the early research has shown it has some promising effects in preventing Alzheimer’s disease.

With technology developing and advancing with each day, scientists today are trying to prove that some terpenes even have anti-carcinogenic effects.

In general, the FDA, as well as other agencies, have recognized terpenes as safe for use. However, we need more research to improve the findings and efficiency of these little aromatic substances.

Is There Any Other Way to Benefit From Cannabis Terpenes Besides Smoking?

When it comes to getting the most out of cannabis terpenes, people are often concerned with consumption methods. Marijuana is usually associated with smoking joints and blunts, but that doesn’t always have to be the case.

In fact, smoking is not the one and only option. For the greater good of our health, it’s often recommended to avoid smoking marijuana. There are other ways to ingest all the goodies that cannabis offers.

There are tons of homemade recipes for marijuana edibles which can also help in getting the terpenes in our bloodstream. Edibles are always a safe choice, as there is no heat, smoke or anything harmful. Plus, cooking with marijuana can be really fun.

Vaping is also a rather healthy way to use marijuana for both medical and recreational purposes, so consider that one as well.

But before you decide to try marijuana and its terpenes for your specific condition, make sure to do your homework, do the research and, consult your doctor before your next visit to the dispensary, provided you have a weed friendly doctor in your area.