Category: > Remedies > Juicing Raw Cannabis Is A Medical Health Cure! Here’s How You Do It!
862 shares 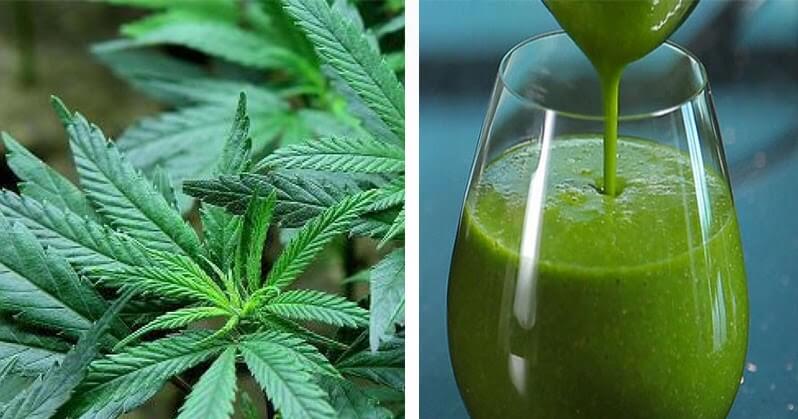 Juicing vegetables is all the rage these days — so why should juicing raw cannabis be any different? There are a number of health benefits that can come from this, although, of course, more research needs to be done. People are becoming more and more interested in the various health benefits that come from both smoking marijuana and juicing marijuana. It’s no surprise that the research is coming in fast that juicing raw cannabis can be a great, healthy addition to your diet.

Although we don’t tend to think of marijuana as a vegetable, it technically fits the description of what constitutes a vegetable. Because a vegetable is defined as “any plant cultivated for food, edible herb, or root,” marijuana fits right in.

Like many other vegetables, marijuana loses some of its nutrients when it is heated up (such as when cooked or sautéed). Enzymes are also lost from this process. In addition to fibre, iron, and calcium, marijuana also has cannabinoids (something that, unlike the other nutrients, only a marijuana plant has). Juiced marijuana is therefore also extremely potent and densely packed with nutrients. It results in having strong health benefits without affecting the consumer the way smoking marijuana would (i.e. by having the psychoactive properties).

The combination of high cannabinoid acids that are found in raw marijuana, along with the excellent fatty acids that aren’t produced in the body and therefore need to be provided through a diet, make for an excellent, nutrient-rich ingredient. Juiced raw marijuana can also help lower inflammation, assist in the communication between cells (in both directions), and even have an anti-tumor effect.

Why Juicing Is Good For You

It is true that plenty of marijuana users smoke their marijuana in order to treat certain conditions or ailments, raw marijuana can actually serve as preventative measures to avoid this from being necessary to begin with. Your immune system is boosted, your bone metabolism is boosted, and even your neural function is boosted. Medical marijuana can even slow or prevent the growth of cancer cells.

The “high” that everyone thinks of when consuming marijuana is actually a direct result of heating up your marijuana, called decarboxylation (or just “decarbing” for short). This process converts THCa into THC, which is responsible for giving the user those psychoactive effects. Smoking marijuana therefore actually reduces the health benefits, since you need the THCa as well as the CBDa to get the most nutritious value out of your marijuana.

In this way, juicing marijuana can serve as a dietary supplement of sorts. The FDA has actually approved a CBD intake up to 600 mg per day, which would not be possible if you are smoking marijuana, but is perfectly feasible if you are consuming it in a raw way (such as juicing).

Believe it or not, cannabinoids already exist in our bodies — they are called endocannabinoids. They bind to our receptors (which are found in every human body) and help regulate immune systems and their functioning. The same goes for bone functions and nerve functions. The endocannabinoid system can do a lot to restore the balance in a person’s body.

First of all, don’t buy dried marijuana from a local, legal dispensary. You need fresh, raw plant matter from marijuana plants — they need to be recently picked and not have any contaminants of any sort. In general, fresher is always better (which applies to any kind of juicing, marijuana or otherwise). Ideally, you should grow your own, so that you always have some fresh leaves on hand.

Whatever you do, do not juice dried, cured marijuana. That is exclusively for smoking, but will not work at all for juicing. You may not be able to find raw marijuana from your local dispensary, so don’t be surprised if your quest for juicing becomes a growing project.

When juicing, try using 15 leaves and two large raw buds (and consume this much on a daily basis, if possible). The buds should be harvested when their THC glands are not amber, but clear.

You should juice your marijuana alongside some other vegetable (or vegetable juice) for the best flavour. Raw marijuana can tend to be quite bitter and adding other ingredients greatly helps. Try carrot juice (ten parts carrot juice, one-part marijuana juice). This simple recipe is good for three drinks – one for each meal. Store your fresh juice in the refrigerator in sealed containers.