Category: > Remedies > Vitamin B17 May Treat Cancer But Has Been Banned By The FDA: Truth From a 40-Year-Long Cover-Up Revealed
2.0K shares 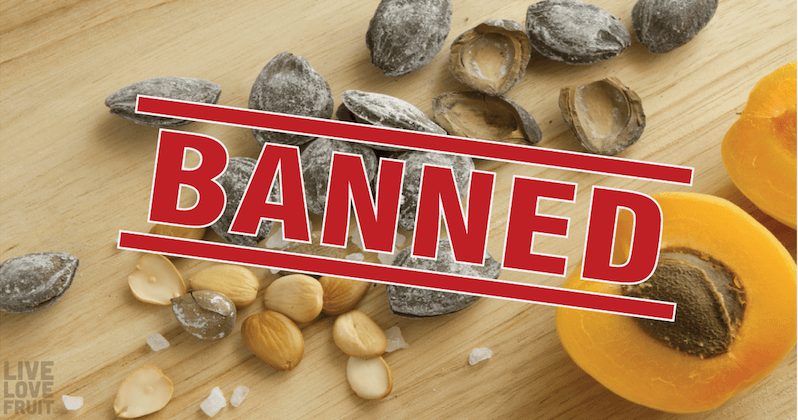 Although this vitamin has been well-documented in its ability to fight cancer, it was banned by the FDA during the 1980s. It is still, to this day, touted by some alternative medicine practitioners as a treatment for cancer, however, controversy over this vitamin still remains.

A simple Web search will come up with articles supporting this nutrient as a miracle cure, with others shunning it and claiming it as a hoax.

What Is Vitamin B17?

Vitamin B17, also called amygdalin, is found naturally in the seeds of plants of the prunasin family, such as apricots, apples, cherries, peaches, prunes, plums, pears and almonds. Laetrile is a partly man-made (synthetic) form of the natural substance amygdalin.

Some people call laetrile vitamin B17, even though it isn’t technically a vitamin. It’s scientific name is mandelonitrile beta-D-gentiobioside, and is considered a nitriloside, which is a natural cyanide-containing substance. Laetrile, the extract form of vitamin B17, is most well-known for helping prevent cancer development through the production of hydrogen cyanide – one of the very reasons the FDA banned it in the 1980s.

When hydrogen cyanide is released into the body’s tissues, it targets and destroys mutated cells (1). The presence of cyanide in vitamin B17 is thought to be the main anti-cancer component, however, it has not been fully proven in clinical settings as of today (and for reasons which could be explained below).

In the 1970s, laetrile was widely promoted as an anti-cancer agent, until the FDA banned it in the 1980s. Laetrile contained cyanide, which is a known poison, and so the FDA made it illegal to sell as a dietary supplement.

Before its ban, laetrile was used at the Memorial Sloan Kettering Cancer Centre in New York. Ralph Moss was its Assistant Director of Public Affairs during this time, and has since become a vocal author and lecturer on alternative therapies for cancer.

In an interview, he talks about what he learned while at Sloan Kettering:

“Shortly after I went to work [at Sloan Kettering], I visited the elderly Japanese scientist, Kanematsu Sugiura, who astonished me when he told me he was working on Laetrile (B17). At the time it was the most controversial thing in cancer, reputed to be a cure for cancer. We in Public Affairs were giving out statements that laetrile was worthless, it was quackery, and that people should not abandon proven therapies. I was astonished that our most distinguished scientist would be bothering with something like this, and I said, ‘Why are you doing this if it doesn’t work?’ He took down his lab books and showed me that in fact Laetrile was dramatically effective in stopping the spread of cancer…We were finding this and yet we in Public Affairs were told to issue statements to the exact opposite of what we were finding scientifically (2).”

The controversy surrounding laetrile after Dr. Moss’ exposé soon expanded to include the natural form of amygdalin found in plants (otherwise known as “vitamin B17”). He stood by his statements (even after being fired from Sloan Kettering) that the medical establishment was suppressing research into natural treatments for cancer.

Author, film-maker and advocate for natural cancer treatments, G. Edward Griffin, came to similar conclusions after discovering the cancer-fighting abilities of B17. In his book, World Without Cancer with Dr. John Richardson, Griffin wrote:

“Every Laetrile study had been tarnished with the same kind of scientific ineptitude, bias and outright deception… Some of these studies openly admitted evidence of anti-cancer effect but hastened to attribute this effect to other causes. Some were toxicity studies only, which means that they weren’t trying to see if Laetrile was effective, but merely to determine how much of it was required to kill the patient.”

Benefits of Vitamin B17

1. May Help Protect Against Cancer

The cyanide content of amygdalin is in the form of cyanogenic glucoside of the nitriloside family of water-soluble sugar compounds found in plants. This substance has been found to inhibit cancer cell growth and causes cell apoptosis (death) in kidney, breast, and prostate cancer cells (3, 4, 5).

Cancer cells contain an enzyme called glucoside at three thousand times the level found in a healthy cell. When this enzyme comes into contact with a nitriloside, a chemical reaction breaks down the nitriloside into hydrogen cyanide and benzaldehyde. The cyanide kills the cell. But get this – a healthy cell doesn’t contain enough glucoside to release the cyanide, so therefore, amygdalin is only toxic to abnormal cells, leaving healthy ones alone.

Because vitamin B17 is still a source of controversy in the Western medical community as a cancer treatment, very little money is put into further research. Most mainstream media have dismissed its medicinal use as a hoax (despite the clear evidence that B17 does indeed kill cancer).

Vitamin B17 helps slow the spread of illness throughout the body by supporting the blood, pancreas and liver. By helping support liver detoxification, vitamin B17 boosts immune function as a result of less toxic matter to deal with. One study found that vitamin B17 amygdalin stimulated the immune system by increasing the ability of a patient’s white blood cells to attack harmful cells (6). It has also been postulated that vitamin B17 may help increase production of pancreatic enzymes that prevents the transfer of normal cells into dangerous ones.

Vitamin B17 has also been found to lower high blood pressure, thanks to the formation of thiocyanate when consumed. Thiocyanate is a powerful blood pressure-lowering agent (7).

Back in 1962, a case series was published where patients were treated with a wide range of doses of intravenous vitamin B17 laetrile. The main benefit reported was pain relief, with some responses including decreased adenopathy (swollen lymph nodes) and decreased tumour size (8).

Safety of Vitamin B17

Many studies have found that vitamin B17 is safe for human consumption. However, more information might still be needed to determine the most effective dose.

Toxicity resulting from cyanide poisoning is much higher when vitamin B17 is taken orally. This is because intestinal bacteria contain enzymes that activate the release of cyanide found in vitamin B17 – making its effects more drastic and quick-acting. When vitamin B17 laetrile is injected, however, this type of negative reaction rarely occurs (9).

I personally wouldn’t take oral B17 in supplement form, and would simply obtain it from natural sources. Taking high doses of anything in supplemental form could be dangerous, unless you are so desperate and it is your last chance for hope and fighting off disease. Food sources are always a safer option, and pose much less risk than extracts or pills.

Best Sources of Vitamin B17

Almost all seeds and kernels from various types of fruit contain vitamin B17. This includes things beyond just apricot seeds, but apple, pear, cherry, plum, prune and peach seeds.

Consuming just a few apricot seeds is plenty if you’re wanting to ward off cancer.

According to the Vitamin B17 Organization, these are some of the highest sources of absorbable vitamin B17 (10):

Vitamin B17 In History

The health benefits of vitamin B17 haven’t only been recently discovered. It has been used as a traditional remedy in the form of bitter almonds by cultures including ancient Egyptians, Chinese and Pueblo tribes.

However, today, vitamin B17 laetrile is not approved for cancer prevention or cancer treatment use in the United States. Apparently, there isn’t enough evidence to prove its safety and efficiency (despite all the above evidence).

Although Laetrile is a banned substance for retailers to sell, it is not illegal to possess or use, therefore, some practitioners still use vitamin B17 in the form of laetrile to help treat cancer. These supplements and extracts often come from Mexico, where the production of vitamin B17 for medicinal purposes is widely supported (10).