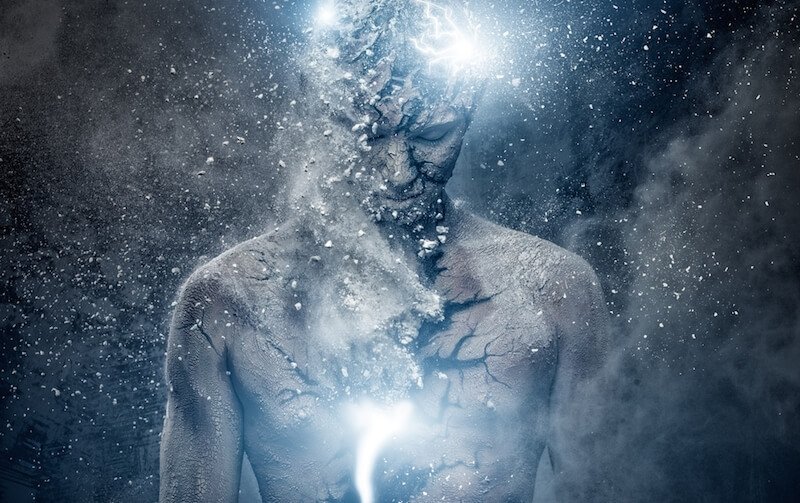 Within the next year, 95% of the cells in your body will die and be replaced. In just 365 days, your body rebuilds itself into something better (or worse), depending on how well you treat it.

This also goes to show that you are what you eat, and that almost every cell in your body eventually dies and is replaced by new cells from the food that you eat. Every day is a new opportunity to build a new body, so why not start today?

You could re-build your body on processed junk foods, cakes, pies and pastries and frozen dinners or canned and boxed foods – OR – you could re-build your body with fresh, whole fruit and vegetables, nuts and seeds, legumes and pseudo-grains like kamut and quinoa. If you really wish you feel your optimal best, you’d opt for the latter and provide your body with what it needs, instead of with foods that don’t truly nourish the body.

It is also important to note that fresh fruit and vegetables will improve cell regeneration and infuse the body with beneficial vitamins, minerals and antioxidants, all of which help us live longer, happier lives. The Standard American Diet will simply dig you an early grave, and we all know that isn’t much fun.

So, without further adieu, here is how long it takes different organs and cells to regenerate: 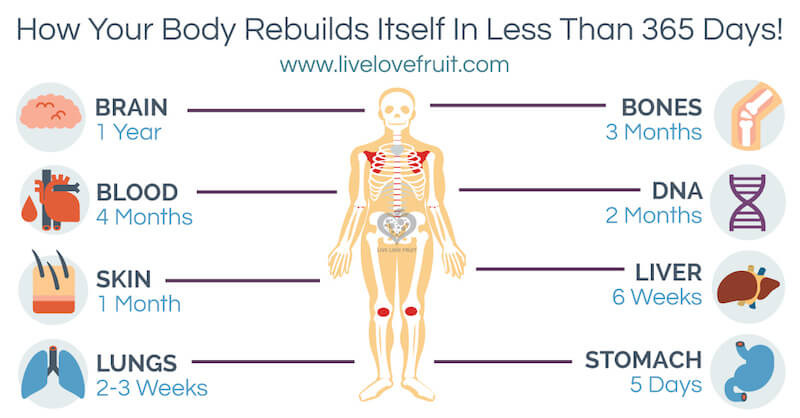 Brain cells typically last an entire lifetime, although there is a process called neurogenesis, which has been documented in 3 areas of the cerebral cortex, whereby new nerve cells are created. For almost a century, scientists have believed that human (and other primate) brains do not regenerate or add new neurons after maturation, however in recent years, scientists have slowly been discovering that neurons do in fact regenerate, and new neurons can be added after maturity.

The liver does one thing incredibly well: regenerate itself. In fact, the liver has the best rate of regeneration than any other organ in the human body. If a chunk of the liver is removed, then it will quickly regrow back to normal size, and not beyond that. In just 6 weeks the liver completely rebuilds itself! This isn’t surprising, however, given how many toxins it processes in a lifetime. If the liver didn’t rebuild itself every 6 weeks, we probably wouldn’t be living very long lives.

With our bodies constantly being bombarded with free radicals, the DNA undergoes significant damage. Fortunately, for us, our DNA has the ability to repair itself and it takes a little over 2 months to do so. Eating a wide variety of high-antioxidant foods like broccoli, berries, and reishi mushrooms will improve DNA repair (along with enzyme-rich raw foods, and herbs like cat’s claw, which has been found to provide our DNA with super-rebuilding activity).

The stomach lining can heal, if given the chance, but you better not be taking any sort of prescription drugs. It takes just 5 days for the epithelial-cell lining of the stomach to completely rebuild itself. This is no surprise given their rough life of breaking down food. The average age of cells originating from the main body of the stomach is around 16 years.

The surface layer of the skin (epidermis) is recycled every 2-4 weeks (around 1 month). The skin is one of the most regenerable areas of the body, and thankfully so, given how much it is exposed to every day. The ability of the skin to heal (even after major damage), occurs because of stem cells that are present in the dermis of the skin as well as cells in the stratum basal of the epidermis, both of which help generate new tissue.

Red blood cells live for about 4 months, whereas white blood cells live on average more than a year. The body is constantly making new blood, especially for women who menstruate once a month (or those who have undergone injury or donated blood). As they travel through the circulatory system, red blood cells become old and battered, and are discarded to the liver, where they are stripped of iron to be used for healthy red blood cells, before the remaining old red blood cell is destroyed in the spleen.

Your body rebuilds new bone cells in as little as over 3 months! The entire human skeleton, however, is thought to be replaced every 10 years or so in adults. Your bones, in fact, are constantly changing. Cells called osteoclasts break down old bone so that osteoblasts can replace it with new bone tissue (bone remodelling). This constant bone remodelling replaces old bone tissue with new tissue over the course of around 2-3 months. That’s also usually the time it takes for a broken bone to repair itself (or at least that’s how long it took my broken leg to get better!).

The lung cells are constantly renewing themselves, and for good reason, too. Because the lungs are constantly taking in and filtering pollution, chemicals, and other stuff that lingers in the air, they require a fast cell turn-over rate. The alveoli of the lungs (where exchange of oxygen and gases takes place) have a steady regeneration state that takes over a year. However, the cells on the lung’s surface renew every 2-3 weeks.