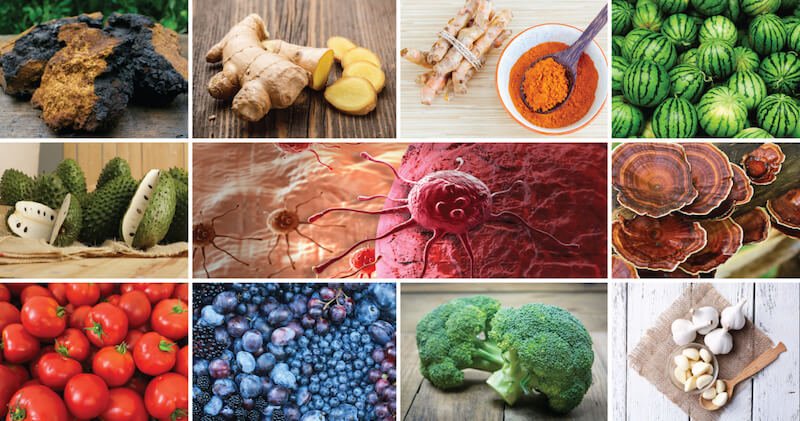 There is surmounting evidence that the foods we eat weigh heavily on our fight against cancer. With 1 in 3 people affected by the disease, it is crucial that we include in our grocery list, some of the best cancer-fighting foods available.

Cancer-Fighting Foods You Should Add To Your Grocery List

The ORAC value of the extraordinary chaga mushroom is among the highest of any known food! The ORAC test stands for Oxygen Radical Absorbance Capacity and measures the ability of food to absorb free radicals. Foods with the highest ORAC rating help protect against premature aging and memory loss. Chaga mushrooms score at over 110,400 on the ORAC scale, which is ridiculously high, and great for free-radical scavenging activity. Because free-radicals are a major trigger and cause of cancerous cell growth, consuming high antioxidant containing foods is a must.

There are multiple studies that have proven chaga mushrooms’ incredible ability to inhibit cancer cell growth by inducing apoptosis (cell death) of the tumour in question.

Chaga is best made into a tea, where you let the powder or chaga mushroom “chunk” boil in water for 30 minutes – 1 hour (adding in more water when needed as it boils out).

Ginger is a great remedy for helping get rid of nausea, but it has also been found effective against cancer too. Rebecca Liu, assistant professor at the University of Michigan explains that ginger helps induce apoptosis (“cell suicide”) in cancer cells without affecting surrounding, healthy cells.

Including ginger in your juices, soups, smoothies and salad dressing recipes is a great way to get more of this amazing root into your diet!

Curcumin, the active component in turmeric, helps prevent many cancers, especially breast and uterine cancers. Curcumin acts by preventing the formation of cancer-causing enzymes, thus reducing the risk of cancer cell formation and growth. Specifically, turmeric acts by inhibiting topoisomerase enzyme activity, which is essential in the replication of cancer cells.

I love juicing fresh raw turmeric root with orange, lemon and celery. This makes a powerful tonic that is wonderful in the morning for flushing out the old, and making way for the new!

10,000 times more effective at treating cancer than chemotherapy, the soursop is one fruit you should definitely be eating. This fruit, also referred to as guanabana in Costa Rica, tastes like piña colada! I had the pleasure of eating it while I was out there, and intend on doing so when I return November 2015.

This fruit can be found widely available in Costa Rica (San Isidro farmers market!!) or in your local Asian grocery food store. While in Costa Rica, my friend Ashley extracted juice from the fruit and blended it with pineapple to make an incredible tasting smoothie.

This popular mushroom in Asian countries has been used to promote general health and longevity for centuries. In fact, the dried powder of reishi was used as a chemotherapy agent in ancient China, and has more recently been confirmed of its cancer cell inhibiting abilities and immune system strengthening effects.

You can learn how to make reishi mushroom tea here!

Not many people view watermelon as a cancer prevention remedy, but I personally think that this fruit is a cancer-curing miracle! Being one of the most alkaline fruits on the planet, it will help neutralize acidity levels in the body, which is often a huge trigger and main cause of the cancers we see today (no surprise given the high-acid standard American diet).

Watermelon also contains lycopene, the famous cancer-fighting substance found in tomatoes (mentioned below!). Eat watermelon as is, or juice (or blend) it with lime and mint for a refreshing drink on a hot summers day.

Broccoli contains sulforaphane, which can help stop the spread of cancer. Sulforaphane is an incredibly powerful antioxidant that ranks high in broccoli, and even higher in broccoli sprouts (the baby version of broccoli). Consuming a serving of broccoli everyday can reduce your risk of colon cancer by 50%! The chemical compounds (like galactose), found in the fibre of broccoli, has the ability to prevent cancer-causing proteins (lectins) from attaching themselves to the lining of our colon. How cool is that?

Consuming broccoli in its raw form is best, but even lightly steaming it (if that is the only way you can eat it) should preserve some of the cancer-fighting abilities. I love eating broccoli with a no-bean zucchini hummus that I make, and it tastes amazing! Otherwise, broccoli sprouts are a common contender in a variety of my salad creations.

It may make your breath smell a little off, but the benefits largely out-weigh the bad breath. Garlic has been used for centuries as a natural antibiotic, helping get rid of viral and bacterial infections, healing cold sores, and regulating blood sugar (among so much more). Increased intake of garlic has been associated with a reduced risk of certain cancers like stomach, colon, esophagus, pancreas and breast cancer. One study carried out by the Jiangsu Provincial Centre for Disease Control and Prevention in China found that individuals who consumed garlic at least twice a week had a 44% lowered risk of developing lung cancer than those who did not consume raw garlic.

Garlic is also high in organosulphur compounds, which help destroy glioblastoma cells, the main cells that make up a deadly type of brain tumour.

Including raw garlic in salad dressings and juices is the best way to reap the benefits of this amazing plant. It is important to eat garlic raw, because once it is heated to high temperatures, the cancer-fighting properties of garlic greatly decline.

One of my favourite fruits, the tomato, also happens to be a great cancer-fighting food. These red jewels of deliciousness contain a compound called lycopene, which also happens to be a very famous cancer-fighting antioxidant, especially against prostate cancer (mainly because lycopene likes to concentrate in tissues of the prostate). Lycopene, and other tomato components, have been found to also stop the proliferation of breast, lung and endometrial cancers.

This strong antioxidant works by scavenging free radicals that normally damage our DNA and disrupt cell growth, promoting disease. While tomatoes are the highest in lycopene, guava, watermelon and pink grapefruit are also relatively good sources of the antioxidant.

You’ll be happy to find that these tasty little treats are also one of the best cancer-fighting foods. Almost every organic berry out there is loaded with free-radical scavenging antioxidants that help protect our cells and lower our risk of disease like cancer. Berries help prevent tumour formation, and slow tumour cell growth in individuals already affected. Ellagic acid, a common antioxidant in most berries (highest in raspberries), inhibits the genesis of tumours, and slows the growth rate of pre-malignant cancerous cells.

Including at least a cup of organic berries to your diet every day will benefit your body in more ways than one. Please do not purchase non-organic berries! They are high in pesticides and herbicides, and will likely cause more cancer than actually prevent it.