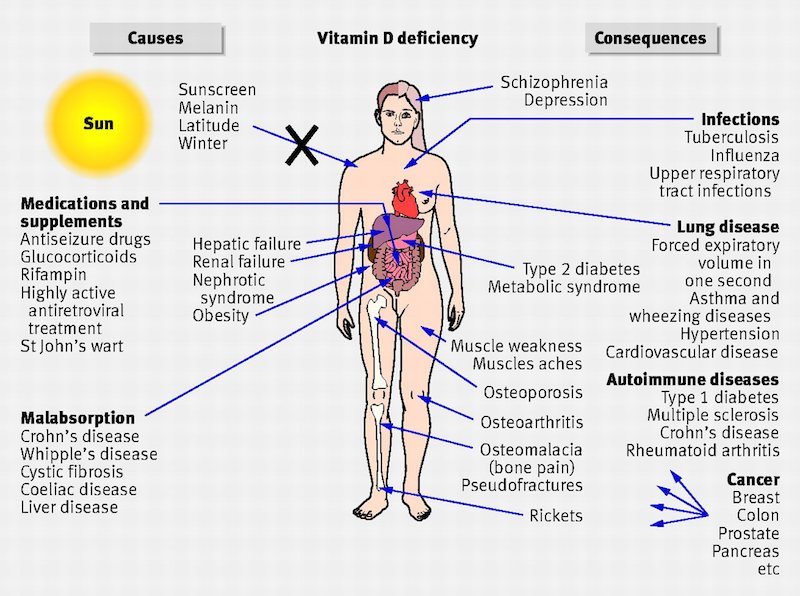 If you live in North America, there’s a pretty good chance you’re low on vitamin D.

According to the journal Nutrition Research, over 42% of U.S. adults are deficient in the nutrient. Harvard University has also estimated that roughly 1 billion people worldwide are deficient in vitamin D – and this isn’t a good thing.

Vitamin D is essential for living a long, healthy life. Even those who live more North are prone to higher cancer rates, given that vitamin D is such a crucial vitamin involved in keeping cancer at bay. Those of us who get less sun (and don’t supplement during darker months) are not only at risk for cancer, but many other conditions as well.

Why Are People Vitamin D Deficient?

There are many reasons why vitamin D deficiency has become epidemic. For one, the government has scared us into believing that unless we completely block the sun from entering our body, we’re going to get skin cancer.

The funny thing about this is, is that vitamin D literally protects us from getting cancer in the first place. And while there are legitimate fears about the UVA rays (the ones that tan your skin) burning your skin and increasing your risk of melanoma, there are many ways we can still appreciate the sun and absorb the beneficial UVB rays (the ones that your body uses to create vitamin D).

Wearing sunscreen, spending too much time indoors, and covering up n the winter time severely limits your skin’s exposure to sunlight – so it’s rather easy to miss out on this crucial vitamin.

Giving your skin at least 30 minutes in the sun every day, without sunscreen, and between hours when UVA rays are lowest, is a great way to make sure you’re getting enough vitamin D. If you do plan on being outside for extended periods of time, wearing a wide-brimmed hat, or some light clothing will do the trick. There are also great all-natural sunscreens out there that do not harm the body, such as Raw Elements.

Also keep in mind that during the winter, the sun in the Northern Hemisphere (like Canada) doesn’t reach dangerous levels such that you need to worry about UVA rays. During the summer in the Northern Hemisphere, or winters and summers as you get closer to the equator, you should be smart about how much time you spend in the sun, especially between the hours of 12pm and 3pm. Anywhere outside of that timeframe, you should be good.

Keep in mind, too, that our skin takes awhile to process and synthesize vitamin D from the sun. I always advise people to steer clear of scrubbing their skin in the shower after they have been outside for at least 48 hours after the fact!

While your body does have the ability to create vitamin D and absorb it from foods like those that are vitamin-D enriched, or mushrooms that have been soaking up the sun’s rays, the vitamin actually needs to be processed by your liver and kidneys before it can be used (1). That’s mainly because vitamin D isn’t a true vitamin, but a potent neuro-regulatory steroidal hormone.

Stephen B. Kritchevsky, Ph.D., Professor of Internal Medicine and Transitional Science at the Wake Forest School of Medicine tested the blood of 2,638 African-Americans and Caucasians aged 70-79 after they fasted for 12 hours. They then contacted the participants every six months for updates on their health and wellbeing.

“We observe vitamin D insufficiency (defined as blood levels <20 ng/ml), n one third of our study participants. This was associated with nearly a 50 percent increase in the mortality rate in older adults…Our findings suggest that low levels of vitamin D may be a substantial public health concern for our nation’s older adults (2),” explained Dr. Kritchevsky.

Why We Need Vitamin D

Vitamin D is pretty essential in the body, and we can see why when we examine what deficiencies can result in.

Currently, there are over 33,800 medical papers online with vitamin D in the title or abstract – that’s a lot!

According to a study published in the Journal of Clinical Endocrinology & Metabolism, every 10-point increase in vitamin D levels was associated with a 4% increase in survival among people with cancer. The strongest link between vitamin D and survival rates were found in patients with lymphoma, colorectal cancer, and breast cancer (3).

Breast cancer patients with healthy vitamin D levels are also twice as likely to survive than patients with lower levels, according to reports in the journal Anticancer Research (4).

A 2007 study published in the American Journal of Preventative Medicine also found that getting enough vitamin D can result in a 50 percent lower risk of colorectal cancer (5). Not only that, but research published in the International Journal of Cancer found that a mere 10 ng/ml increase in serum vitamin D levels resulted in a 15 percent reduction in colorectal cancer incidence and 11 percent reduction in breast cancer incidence (6).

Do you ever notice feeling a little more sad during the winter months? It often has to do with vitamin D levels (perhaps you’ve heard of seasonal affective disorder?). In fact, people with low levels of vitamin D in their blood were more than twice as likely to be diagnosed with depression, than those with higher levels, according to a study in the British Journal of Psychiatry that included over 31,000 participants (7).

Researchers in a 2013 BMC Medicine article write, “A range of factors appear to increase the risk for the development of depression, and seem to be associated with systemic inflammation; these include psychosocial stressors, poor diet, physical inactivity, obesity, smoking, altered gut permeability, atopy, dental cares, sleep and vitamin D deficiency (8).”

Vitamin D is also involved in the inflammatory response in the body. Research has shown that low levels of vitamin D may make inflammatory conditions, such as psoriatic arthritis (a condition were the immune system attacks the joints, causing pain and inflammation) worse, possibly by increasing white blood cell levels (9). Studies have found that up to 62% of people with psoriatic arthritis have insufficient levels of vitamin D (10).

Not only that, but vitamin D is also involved in helping treat inflammatory bowel conditions such as Chron’s disease (11). Studies have found that those suffering from Chron’s often have low serum lives of vitamin D. With that being said, vitamin D has even been found to affect genetic expression associate with Chron’s disease, meaning that if the disease runs in your family, you can likely help prevent it by getting a daily dose of vitamin D (12).

If you’re vitamin D deficient, you also increase your risk of coronary artery disease by 32%, according to research presented at the American College of Cardiology’s Annual Scientific Session. By improving immune function and controlling systemic inflammation, vitamin D can help reduce the risk of heart trouble, researchers say (13).

According to a study in the journal of Neurology, adults who were moderately deficient in vitamin D had a 53% increased risk of developing dementia, and those who were severely deficient had an even higher risk (125%) of the disease (compared to individuals with healthy D levels). It is thought that as you age, your skin becomes less efficient at converting sunlight to vitamin D (therefore, increasing your risk for a deficiency) (14).