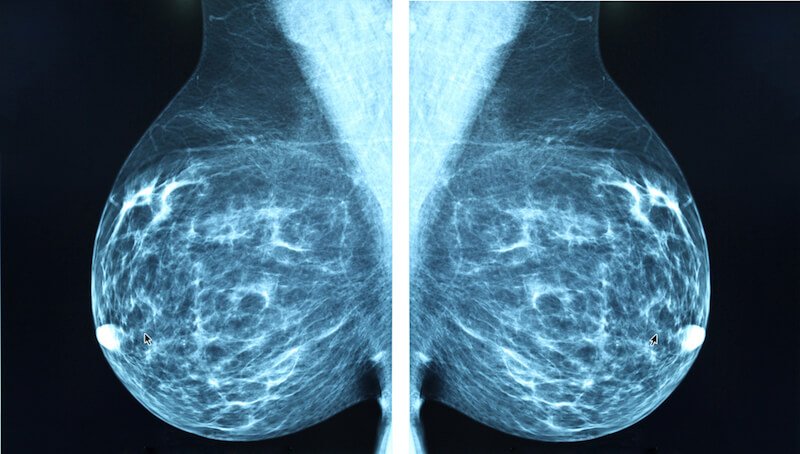 “I believe that if you did have a tumour, the last thing you would want to do is crush that tumour between two plates, because that would spread it,” said general practitioner, Dr. Sarah Mybill, as quoted in the documentary film, The Promise.

Mammogram Dangers: Not Effective Nor Safe

The Centres for Disease Control and Prevention insists that mammograms are the best way to find breast cancer early (2), when it is easier to treat and before it is big enough to feel or cause symptoms. But a review of eight scientific trials evaluating the procedure, found that mammography is neither effective nor safe (3). Mammogram dangers are real.

As published in the Cochrane Database of Systematic Reviews, data that was looked at on more than 600,000 women between the ages of 39 and 74 who underwent the procedure on a regular basis, found that many women are misdiagnosed. The review concluded that mammography causes more harm than good. This is because more women are misdiagnosed and mistreated than those who actually avoid the development of terminal breast cancer. The women who are misdiagnosed and mistreated are wrongfully given chemotherapy treatments, resulting in their rapid demise. Even though they were perfectly healthy prior to treatment.

“If we assume that screening reduces breast cancer mortality by 15% and that over-diagnosis and over-treatment is at 30%, it means that for every 2,000 women invited for screening throughout 10 years, one will avoid dying of breast cancer and 10 healthy women, who would not have been diagnosed if there had not been screening, will be treated unnecessarily,” the authors concluded.

Another study published in The New England Journal of Medicine (NEJM) came to a similar conclusion one year after this review was published (4). The team of medical professionals included a medical ethicist, a clinical epidemiologist, a pharmacologist, an oncologic surgeon, a nurse scientist, a lawyer and a health economist. They decided that the medical industry’s claim that mammography is beneficial, simply is not true.

They found that for every 1,000 women screen in the United States over a 10-year annual screening period beginning at age 50, one breast cancer death would be prevented, while 490-670 women would have a false positive, and 70-100 would undergo an unnecessary biopsy. So more women were over-diagnosed (screening is catching cancers that never would have required treatment in the first place) than to have earlier detection of a tumour that was destined to become large.

In addition, The Canadian National Breast Screening Study, which was conducted over the course of 25 years, concluded that 106 of 484 screen-detected cancers were over-diagnosed (5).

The doctors explain: “This means that 106 of the 44,925 healthy women in the screening group were diagnosed with and treated for breast cancer unnecessarily, which resulted in needless surgical interventions, radiotherapy, chemotherapy, or some combination of these therapies.”

And that’s not all. A study titled Trends in Breast Cancer Stage Distribution Before, During and After Introduction of A Screening Program in Norway, found that mammography screenings significantly increased incidence of localized stage cancers without reducing the incidence of advanced cancers (6).

Swiss Medical Board Against Systematic Mammograms

After conducting their thorough review of the study published in NEJM (mentioned above), the medical professionals were left with no choice but to recommend that no new systemic mammography screening programs be introduced, and that a time limit should be placed on existing programs.

The Swiss Medical Board advised that the quality of mammography screening should be evaluated, and that women should be informed in a “clear and balanced” way, about the benefits and harms of screening (7).

They came to their conclusions by taking three primary factors into play:

The on-going debate over mammography screening is based off a “series of re-analyses of the same, predominantly outdated trials.” These trials happened more than 50 years ago, and the last trial was in 1991.

The expert panel questions: “Could the modest benefit of mammography screening in terms of breast-cancer mortality that was shown in trials initiated between 1963 and 1991 still be detected in a trial conducted today?”

2. The Benefits Did Not Clearly Outweigh the Harms

The experts note they are “struck by how non-obvious it was that the benefits of mammography screening outweighed the harms.”

They cited a study published in the British Medical Journal (BMJ), that involved 90,000 women followed for 25 years (one of the largest and longest studies of mammography to date). It found that mammograms have absolutely NO impact on breast cancer mortality (8).

3. Women’s Perceptions of Mammography Benefits Do Not Match Reality

The experts also say they are “disconcerted” by the major discrepancies between women’s perceptions of mammography benefits versus the actual benefits.

In one survey, most women said they believed mammography reduced the risk of breast cancer deaths by at least half and prevented at least 80 deaths per 1,000 women screened. In reality, mammography only offers a relative risk reduction of 20 percent, and prevents about only one breast-cancer death per 10,000 women.

The experts asked, “How can women make an informed decision if they overestimate the benefit of mammography so grossly?”

The sad thing is, is that many doctors are just as confused and manipulated as the patients themselves. The relentless industry and media propaganda downplays or ignores research entirely regarding mammogram dangers.

When it comes down to it, we are dealing with outdated clinical trials. The benefits certainly do not outweigh the harms. Women must learn both sides of the story, not just the one that serves the profit-based agenda.

How To Lower Your Risk of Breast Cancer Naturally

There are many ways you can help lower your risk of breast cancer, and naturally too. Below I will name a few:

1. Do Regular Self-Exams: take some time, once a month, to perform a personal self-exam of your own breast tissue. Here is an easy guide on how to do so.

2. Change Your Diet: while this is easier said than done, opting for a whole-foods, plant-heavy diet will reduce your risk of all cancer types. Avoid refined sugar, unfermented soy products, limit your alcohol and caffeine intake, and avoid white flour and other processed foods. Always choose organic when you can – pesticides and herbicides are triggers for cancer cell growth.

3. Remove Environmental Toxins From Your Living Space: chemicals in everyday products like cosmetics, personal care products, pest and weed control and cleaning supplies are all linked to cancer.

4. Don’t Wear a Bra: bras inhibit the lymph nodes from detoxing toxins. If you feel like it isn’t possible to get rid of a bra entirely, reduce the hours you wear one. Women who don’t wear a bra have drastically reduced levels of breast cancer diagnoses (9).

5. Get Enough Vitamin D: make sure you get enough vitamin D. The best source is from the sun, but if you don’t get enough sun, take an oral vitamin D supplement. Vitamin D is able to enter cancer cells and trigger apoptosis (programmed cell death).

6. Don’t Smoke: this should be a given – smoking cigarettes increases your risk of just about every cancer type.

7. Exercise Regularly: regular exercise lowers your cancer risk by triggering apoptosis in cancer cells (programmed cell death). Studies have also found that the number of tumours decrease along with body fat, when engaging in regular exercise.

8. Drink Green Juices and Smoothies Daily: there are plenty of juice and smoothie recipes on my website – head to the recipe bar above to find one that suits your needs!

10. Get Enough Sleep: when we sleep, our body takes time to heal and detox. Not getting enough sleep throws our entire system off balance. It reduces the ability of our immune system to fend off harmful cancerous growths inside the body.