Category: > Health > Aspartame Turns Into Formaldehyde And Methanol In The Body!
952 shares 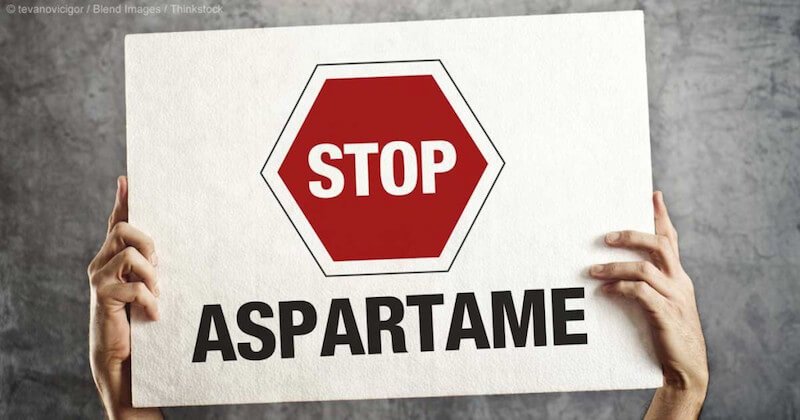 Aspartame is by far, the most dangerous substance on the market that is added to foods. It is commonly sold as NutraSweet® and Equal® and typically found in “diet” foods (sugar-free and/or fat-free) as well as gum, processed honey, yogurt and some fruit juice.

Aspartame was actually discovered by accident in 1965, when James Sclatter, a chemist of G.D. Searle Company, was testing an anti-ulcer drug. It’s made by joining together the amino acids aspartic acid and phenylalanine, and has been marketed since the 1980’s (1).

This synthetic sweetener is 200 times sweeter than sugar, which makes it dangerously addictive. The problem with aspartame is that although it tastes sweet, it doesn’t actually provide any calories (energy), and the body misses out, making you crave more. By tricking the body, aspartame makes you want more to satisfy the reward centres in the brain and provide energy for cells (2).

If you haven’t heard about the dangers of aspartame, now’s the time to educate yourself.

During metabolism in the body, aspartame is broken down in phenylalanine (50%), aspartic acid (40%) and methanol (10%). Amino acid transport is blocked by excess phenylalanine, which contributes to reduced dopamine and serotonin levels (3).

Methanol is also a problem, as it causes CNS depression, vision disorders, and other symptoms. Chronic exposure (such as individuals who chug down diet sodas everyday) can lead to metabolic acidosis, and eventually coma.

Diketopiperazine is another metabolite of aspartame, which is highly carcinogenic to the central nervous system and contributes to the formation of brain tumours like gliomas, medulloblastomas, and meningiomas.

According to one study, aspartame “has been linked to paediatric and adolescent migraines. Upon ingestion, aspartame is broken, converted, and oxidized into formaldehyde in various tissues.” – a good explanation as for why I’d become dizzy, light-headed and migraine-prone whenever I drank diet sodas back in the day.

Not only that, but when you try to abstain from aspartame, psychological issues may result, as the sweetener impairs the transport of tryptophan, which, under normal circumstances, helps produce serotonin (5).

At first, aspartame was a banned substance. Once its marketing began in 1980, the FDA banned the substance, after having 3 independent scientists study the sweetener. The substance was linked “without a shadow of a doubt” to brain tumours and brain cancer by the FDA’s own toxicologist, Dr. Adrian Gross (6).

In 1981, Donald Rumsfeld, CEO of Searle (the company behind aspartame) weaselled his way through the scientific proof set out in 1980, thanks to his connections with Ronald Reagan’s government. Dr. Arthur Hull Hayes, Jr., was the new FDA commissioner, and aspartame was soon FDA-approved for use as an alternative sweetener.

Aspartame quickly gained popularity in processed foods, and it became an important source of income for the Searle company. In 1985, Monsanto bought out Searle, and we all know what happens when Monsanto becomes involved.

Always check your food labels before buying anything. If you’re currently addicted to aspartame, stopping cold turkey is the only way. Abstain from purchasing anything that has aspartame anywhere in the ingredient list. If you can’t go cold turkey, reduce the amount products you eat with aspartame each day, until you no longer require them. Replace them with healthy, whole food options.

In fact, there are many ways to sweeten food without refined sugar and poisonous sugar substitutes like aspartame. Some of my favourites are dates and date paste, vanilla, raw honey, cinnamon, maple syrup, lucuma powder, yacón syrup and fruit juice.

There is no need to fear natural sugar substitutes. Consuming plenty of fresh, juicy, ripe fruit will satisfy that innate craving for sweet things, all the while keeping you full and blood-sugar stabilized.