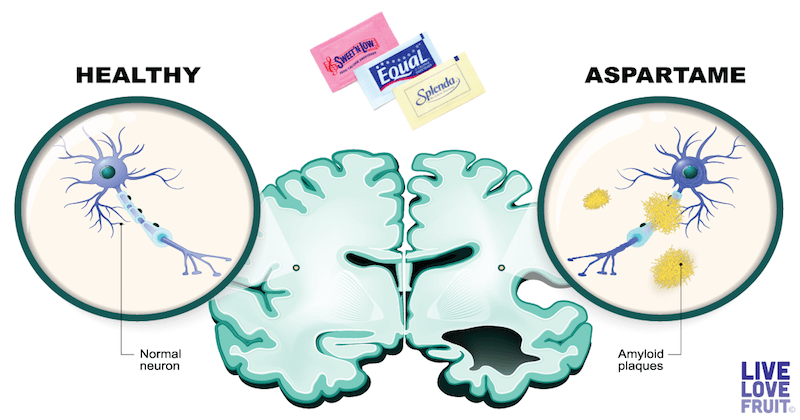 Aspartame is the most popular artificial sweetener in the United States, with most people believing it to be a healthy alternative to sugar.

What some people don’t know is that aspartame is one of the most dangerous food additives on the market. Aside from being linked to heart attacks and stroke (1), aspartame has been found to trigger brain tumours (2), along with a handful of other neurological-related disorders.

Now, WikiLeaks released a John Podesta email that shed light on the artificial sweetener aspartame. He pointed out the dangers of NutraSweet, and the dirty work involved in getting the sweetener approved as a “food” ingredient.

The email chain was forwarded to Pedestal by Wendy Abrams, in which she writes (3):

“I also have a friend who worked for the researchers at University of Chicago (which has a top rated neurology dept) and the doctors there said when they gave NutraSweet to lab mice, it literally blew holes in their brains. They said they will tell a pregnant woman to drink any amount of alcohol before touching a sip of NutraSweet, it is that bad.”

In back and forth emails between Abrams and a man named Don Kennedy, the latter explains how aspartame came to be legalized:

“He explains that the day after Ronald Reagan’s inauguration, January 21, 1981, Searle – the original developer of aspartame – applied to the FDA for approval to use aspartame in food sweetener for a second time [aspartame was previously banned].

Arthur Hayes Hull, Jr., Reagan’s newly appointed FDA commissioner, proceeded to appoint a 5-person scientific commission to review the board of inquiry’s decision. When it became clear that the panel was going to uphold the ban with a 3-2 decision, Hull placed a sixth member on the commission so the vote would become deadlocked. Then Hull personally broke the tie in aspartame’s favour.”

The Shocking Story of How Aspartame Became Legal

Before becoming legal, aspartame was banned twice by the FDA.

After it’s accidental discovery in the mid-1960’s, the company G.D. Searle put aspartame through some testing procedures, which eventually gained approval by the FDA. Unfortunately, the testing process was among one of the worst the investigators had ever seen, and that the product was in fact, unsafe for use.

Not long after approval, the dangers of aspartame brought G.D. Searle under major fire. In fact, aspartame triggered the first criminal investigation of a manufacturer put into place by the FDA in 1977.

Then, in 1980, the FDA banned aspartame from use, after having 3 independent scientists study the artificial sweetener. Why? Because they found that there was a strong risk for aspartame to cause brain tumours. Not to mention a whole list of other health issues created by the chemical.

It didn’t stay like this for long, however. Early in 1981, Searle Chairman, Donald Rumsfeld (former Secretary of Defence, no surprise), vowed to “call in his markers,” to get it approved. The day after Ronald Reagan’s inauguration, Searle re-applied for the approval of aspartames re-use by the FDA.

Ronald Reagan’s new FDA commissioner, Arthur Hayes Hull, Jr., appointed a 5-person Scientific Commission to review the board of inquiry’s decision. The vote was 3-2 in favour of maintaining the ban of aspartame. It wasn’t until Hull appointed a 6th member to the board, which created a tie in the voting, 3-3. Hull then decided to break the tie himself, and approve aspartame for use in food products. In 1985, Monsanto decided to purchase the aspartame patent from G.D. Searle.

Without illegitimate un-banning of the product, aspartame would not be being used today.

Aspartame NOT Fit For Human Consumption

According to New Zealand’s Safe Food Campaign, aspartame is linked to more health problems than MSG. Piles of comprehensive studies have been completed that show aspartame is a cause for over 90 serious health problems, like cancer, leukaemia, headaches, seizures, fibromyalgia, and epilepsy to name a few (4, 5, 6, 7, 8).

Mission Possible World Health International is a comprehensive resource on the subject of aspartame. Its founder, Dr. Betty Martini, has dedicated many years to exposing the dangers of aspartame. The website insists that aspartame is an addictive, neurotoxic, teratogenic, carcinogenic, and excitotoxic substance that has no rightful place in our diets.

Where Is Aspartame Hiding In Your Diet?

If you aren’t actively going out to choose synthetic sweeteners, that doesn’t mean your diet is free of aspartame. In fact, they hide aspartame in almost any diet foods, as well as anything labeled low or no-sugar. Low-fat products may also contain this synthetic sweetener.