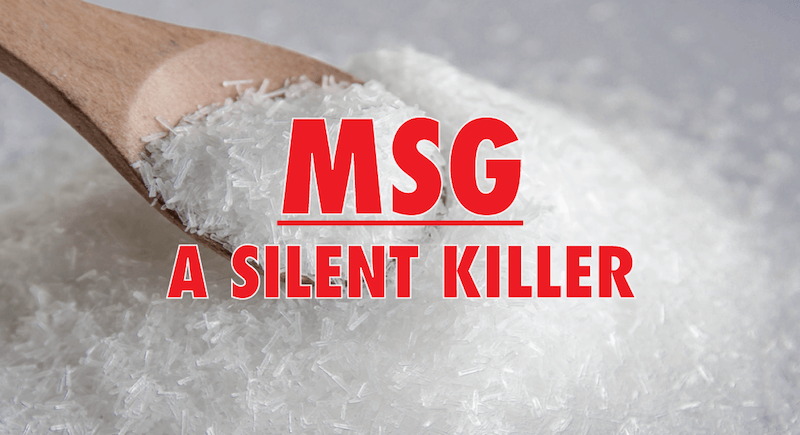 I get hundreds of e-mails each month with people asking me what they can do to get rid of this or that symptom. The number one thing I advise them to do is to eliminate all processed foods. Why? Read on.

Eliminating processed foods from your diet is possibly the number one most important factor in improving your health. Virtually all processed foods are loaded with additives that wreak havoc on the delicate balance the body strives to maintain to allow you to keep going every day.

The most dangerous additive of all? Monosodium glutamate (MSG) – a known carcinogen, endocrine disruptor, and brain cell-killer (1). It has also been linked to the development of cardiac issues (2), kidney problems (3), neurological disorders including Alzheimer’s and Parkinson’s (4), and Lou Gehrig’s disease.

MSG is a food additive, made up mostly of glutamic acid and sodium, containing up to 1% contaminants (5). It is most widely known for its use in Asian food, however it is also used in many packaged foods (like canned soups, crackers, salad dressings, baby food, infant formula, etc.), as well as many fast foods.

You would really taste much if you just took a spoonful of MSG and ate it, but if you were to combine the MSG with food, a reaction occurs that makes you think the food you’re eating tastes better – all thanks to a trick our tongue plays on us, triggering the fifth taste called umami.

MSG leaves our tastebuds wanting more, which makes it highly addictive, and a great marketing scheme for any food company that wants you coming back for more.

In fact, Ajinomoto, the largest producer of MSG, is interestingly enough, also a drug manufacturer. MSG became popular in the US after World War II, when the US military discovered that Japanese rations were much tastier than the US versions.

In 1959, the U.S. Food and Drug Administration (FDA) declared MSG was “Generally Recognized as Safe” (GRAS). It remains under this title to this day, even though it is banned in other countries due to health risks. Not to mention, MSG has been commonly referred to “Chinese Restaurant Syndrome,” a term used to describe the numerous side-effects from numbness to heart palpitations that people experience after eating MSG.

The term has been more appropriately changed to “MSG Symptom Complex,” which the FDA identifies as a “short-term reaction” to MSG (even though it is much more complicated than this, and our bodies are clearly telling us that we should not be consuming MSG).

Despite all this, the FDA still categorizes MSG as GRAS.

Dr. Russell Blaylock, neurosurgeon and author of “Exitotoxins: The Taste that Kills,” did an interview with Natural News, explaining that MSG is an excitotoxin, meaning that it overexcites our brain cells to the point of death, causing brain damage and leading to neurodegenerative diseases like MS, Parkinson’s, and Alzheimer’s disease.

The main problem with MSG is that it is approximately 78% free glutamic acid. Free glutamic acid is the same neurotransmitter used by your brain, nervous system, eyes, pancreas, and more. Messing up with this sensitive chemical balance by eating MSG can really mess things up. Even the FDA admits (6):

“Studies have shown that the body uses glutamate, an amino acid, as a nerve impulse transmitter in the brain and that there are glutamate-responsive tissues in other parts of the body, as well.

Abnormal function of glutamate receptors has been linked with certain neurological diseases, such as Alzheimer’s disease and Huntington’s chorea. Injections of glutamate in laboratory animals have resulted in damage to nerve cells in the brain.”

According to the FDA, even though they claim MSG as “generally recognized as safe,” side effects may include:

Since MSG has been given such a bad reputation, lots of people have been trying to avoid it in their foods – and food manufacturers are catching on. As a result, some of them have removed MSG from their products, but a lot of them have just hid it by using names that you won’t recognize or associate with MSG.

The FDA requires that food manufacturers list the ingredient “monosodium glutamate” on food labels, but they do not have to label ingredients that contain free glutamic acid (even though this is the main component of MSG).

Did you know that there are over 40 labeled ingredients that contain glutamic acid? You would probably never know it by looking at their names alone, so use the guide below to steer clear of these ingredients (thanks to Truth in Labeling for supplying the comprehensive list!).