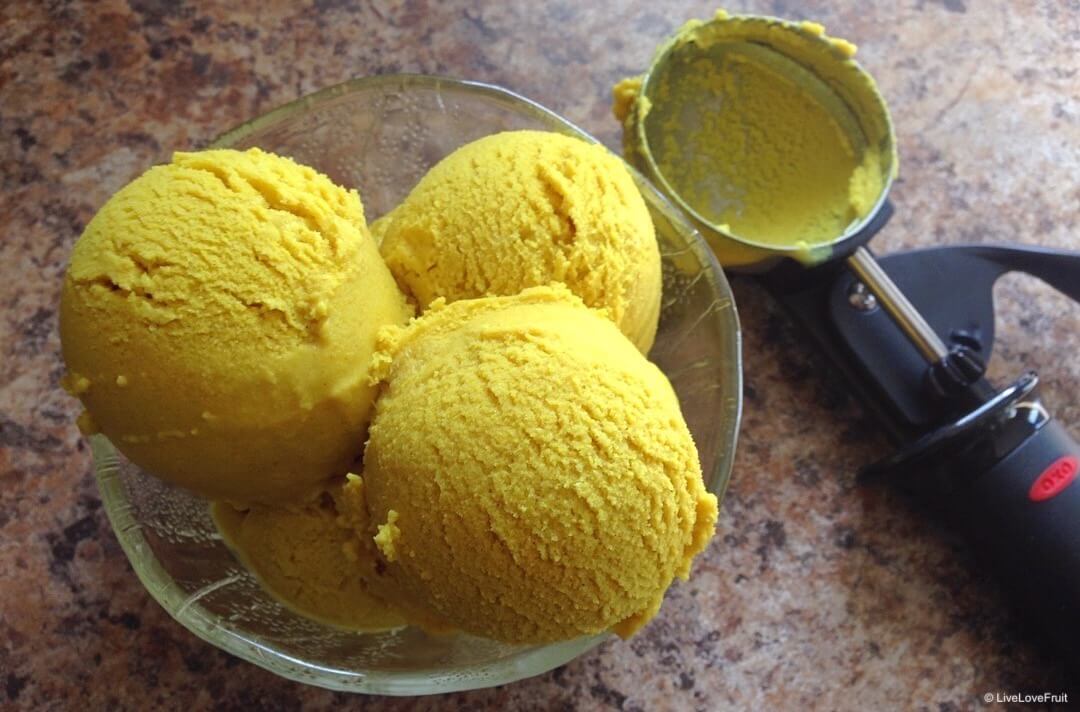 What if you could battle inflammation while eating ice cream at the same time? Well, thankfully, this combination exists! This anti-inflammatory turmeric coconut ice cream not only tastes delicious, but it’ll help ease aches and pains in the body at the same time.

Turmeric is one of my favorite go-to herbs when healing just about any ailment in the body. It helps fight inflammation, lowers the risk of developing cancer (and also fights cancer already in the body), helps cleanse the liver and even supports the health of our brain. Curcumin, the active compound in turmeric, is what gives turmeric its outstanding ability to heal the body from the inside out.

Here are some of the top benefits curcumin has to offer:

Curcumin excels at slowing inflammation. If we don’t have enough antioxidants in our body and we’re inundated by free radicals, curcumin comes along and dampens the inflammatory environment while putting a stop to additional damage. Curcumin has even been found to be more effective than ibuprofen and aspirin. In a study published in the journal Oncogene, researchers performed tests on a wide range of anti-inflammatories against standard pharmaceutical drugs designed for pain relief. They found that aspirin and ibuprofen were least effective at treating inflammatory-pain, while curcumin was found to be most effective (1).

Curcumin has been found to battle cancer in a variety of ways. Studies have shown that curcumin helps contribute to the death of cancerous cells, and reduces angiogenesis (growth of new blood vessels in tumors) and metastasis (spread of cancer) (2). Lab results have also found curcumin capable of inhibiting COX-2, an enzyme that causes negative inflammation, which can lead to cancer.

Our bodies are subject to damaging free radicals on a daily basis. Antioxidants, however, combat free radical damage, which in turn protects us from disease and illness. Curcumin is an incredible antioxidant that actually boosts the activity of your body’s own antioxidant enzymes (3). For this reason, turmeric makes a great supplement for liver and kidney support.

Curcumin has also been shown to have a positive effect on our mood. It has the ability to inhibit a molecule called nuclear factor kappa-light-chain-enhancer of activated B cells (NFkB). NFkB can be turned on by a variety of common life scenarios such as major times of stress, food-induced inflammation or infection. As the body senses higher stress levels, more NFkB is produced as a result. High levels of NFkB has been linked to cancer, inflammatory and autoimmune diseases, neurodegenerative diseases, and chronic viral infections (4).

Curcumin is a blessing for the heart. It not only reduces serum cholesterol levels, but it has been shown to improve the function of the endothelium (the lining of your blood vessels) (5). Some studies have found that taking just one teaspoon of turmeric a day has the ability to reduce the risk of a heart attack, just as effectively as doing three 60-minute cardiovascular workouts a week (6)!

To make ice cream, you also need something to make ice cream in. My partners at Breville sent me an ice cream maker to test out a couple months ago, and I’ve been having quite a lot of fun with it since! If you’re interested in my review of the machine along with a strawberry ice cream recipe, check it out here.

I wanted to make an ice cream that also healed the body at the same time. Most conventional ice creams out there are loaded with mucus-causing dairy, and inflammation-promoting refined sugar. So making an anti-inflammatory turmeric coconut ice cream was something I knew I had to make happen.

The resulting recipe is creamy, delicious, and warming. While it is ice cream (so technically should be cooling), the spices that are added to the ice cream help boost your metabolism and make you feel warm and cozy inside. It’s like drinking golden milk but in the form of ice cream!

2. Put both cans of coconut milk into a saucepan, setting aside 1/2 cup of coconut milk. The layers might have separated inside the cans, so you can use a spoon to scoop out the thicker coconut layer.

4. Warm the ingredients over medium-low heat. Stir occasionally, about 1-2 minutes.

5. Whisk the tapioca flour into the reserved coconut milk until totally dissolved (about 10 seconds).

6. Gently whisk the tapioca mixture into the warmed coconut milk mixture, and increase the heat to medium. You want to cook this on a gentle simmer until the base has thickened enough to coat the back of a spoon – about 6 minutes or so. Do not let this come to a boil – you want to continuously whisk and prevent boiling. Once the cardamom pods start to warm, I like to pop them against the saucepan by using the back of a spoon – this releases the delicious flavors within the pods.

7. Pour this mixture into a bowl and let it sit on the table until it comes to room temperature. Before sticking it in the refrigerator, press a piece of plastic wrap against the surface so that the top of the mixture doesn’t form a skin. Keep this in the fridge for at least 4-6 hours, or overnight.

8. If your mixture forms a hard coconut layer on top, I personally advise taking it off and using it for other recipes. I find that if I only chill for 2 hours or so, this layer doesn’t form as readily as it does overnight. If you take the top layer off after an overnight of chilling, the resulting ice cream will have a lower fat content (which some people might prefer).

9. The next day, or couple hours later (whatever you choose), strain the mixture using a fine-mesh strainer.

10. Pour the strained mixture into a pre-cooled Smart Scoop machine and if you’re using the automatic method, set it to about medium hardness. Press “start” and let it churn for about 20-30 minutes. It might take longer depending on the temperature differences in the house.

11. Scrape the ice cream into a freezer container and press a piece of parchment or saran wrap across the surface to prevent ice crystals from forming along the top. Seal the container, and freeze for at least 4 hours.

12. Let the ice cream warm up a bit on the counter before serving. Coconut ice cream melts a little quicker than milk-based ice creams, so don’t wait too long! Any left-over ice cream can be stored for up to two months, but it is always best within the first week of making.