Category: > Self Improvement > Use These 5 Plant Medicines To Smudge Your House And Clear Negative Energy
14.1Kshares 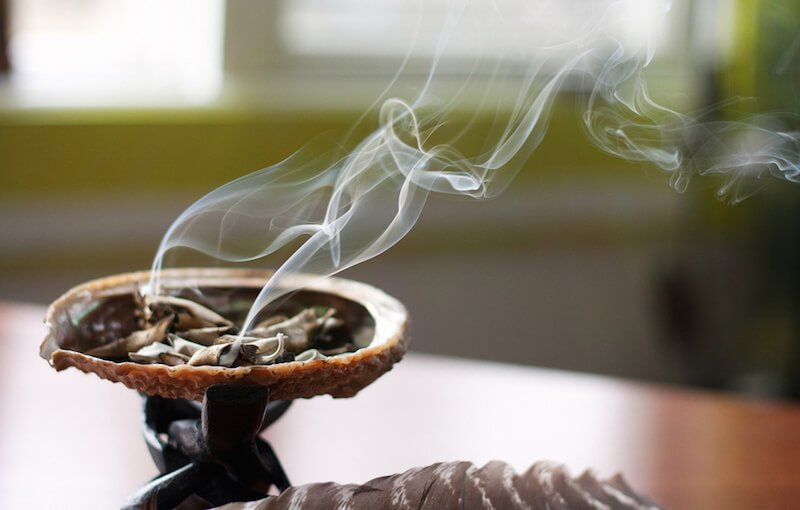 Plant medicines have been used since time immemorial to help cleanse the spirit, and rid space of negative energy. Now, modern scientific research has revealed that burning these medicines can actually purify the air of harmful bacteria.

The burning of herbs and plant resins is done for both medicinal and spiritual purposes. This process is called smudging, and is an ancient practice used among indigenous people around the world. By smudging, you help unlock the spirit of the plant to help protect our physical and energetic bodies. It is also a way to help clear emotional and spiritual negativity that can accumulate in our bodies (or homes) over time.

There is no one way to smudge, but typically the plant medicines are placed in an oyster shell half, or clay dish. Once the smudge material begins to burn, the hands are cleansed by doing a washing-hand motion over the smoke, and then you take the smoke with your hands and place it over your eyes, nose, mouth, ears, over the head, on the heart, over the arms and then feet. To smudge a house, or to smudge others, an eagle feather or turkey feather is used to move the smoke around different areas of the house or body. The practice itself is sacred, and should be treated as such, and respected.

In regards to the study done on medicinal smoke and airborne bacteria, over 94% of aerial bacterial populations were diminished when the medicinal herb of choice (they used a common medicine from India called havan sámagri) was burned for 1 hour in a closed room. They were able to almost completely eliminate diverse plant and human pathogenic bacteria from the air of a confined space. That’s how powerful these plants and resins are!

5 Plant Medicines To Smudge Your House And Clear Negative Energy

So whether you want to get rid of pathogenic bacteria in the air, or just want to cleanse your home or body to feel more uplifted, you should look into burning these 5 incredible plant medicines:

Sage is one of the four plants considered sacred by the indigenous people of North America (the other three are sweetgrass, tobacco and red cedar). It is used to help heal and calm, and make bad spirits sick. The smoke that comes from white sage helps purify mind, body and spirit, and prevents negative spirits from entering rooms being used for ceremony. The video below is a great resource to learn more about this incredible plant medicine.

Sweetgrass grows across North America, and Northern Europe. It can be used in ceremony, or for basket making, and is used to help get rid of negative thoughts, help purify the environment and calm a busy mind.

According to Bob Joseph, founder of Indigenous Corporate Training Inc.:

The Anishnaabe People follow very sacred traditions and believe that when one takes something from the Earth – for example, when sweetgrass is picked – then an explanation to the spirit about why it is being picked and how it will be used is required. The explanation is often accompanied by an offering of tobacco in return for the generosity shown by the Earth and the plant which shared itself.”

Copal is a resin from the copal tree in Mexico and Central America. It is used during sweat lodge ceremonies, and as well as just an incense. Copal smells sweet, and it is an incredibly up-lifting resin. It was used as a ritual offering to the gods by the Mayans and Aztecs, and also used as a way to spiritually cleanse the body.

Cedar has played an integral role in the spiritual beliefs of indigenous people of North America. With these beliefs, they recognize that cedar trees have their own life and spirit. Cedar is very grounding, and is traditionally used to ward off evil spirits. If harvested improperly such that the cedar tree dies as a result, there is the belief that the individual would be cursed by other cedar trees. Cedar is a powerful symbol of strength and revitalization, and should be respected as such.

The Palo Santo wood has been used by the Incas for generations. It is still used as part of curing rituals by Shamans in the Andean mountains. It is known for its ability to help clear a space of negative energy (such as your house, or specific room), and has a similar effect on our spirit body by expelling negative energies and toxins. The Palo Santo tree and wood is considered sacred by the indigenous people of South America, and should be treated as such in the Western world.