The best vegan gluten-free pumpkin pie recipe would only be the best if it was made with under 10 ingredients or less, right? Lucky for you, that’s exactly how many ingredients are needed to make this delicious pumpkin pie.

Out of all the pies, pumpkin pie is my favorite. This became quite the conundrum when I went vegan and gluten-free. And while I have gone down the path of creating raw vegan pumpkin pie (you can find that on my old blog, here), I really wanted to try a revamp of a traditional baked pie.

Coming up with a recipe for the best vegan gluten-free pumpkin pie wasn’t easy. But after some trial and error, I discovered what would soon become a family favorite.

How To Make Gluten-Free Pastry

Making gluten-free pastry can be trying at best, but the gluten-free pie crust mentioned in this recipe is easy to make, sticks together, and bakes very well.

Almond flour seems to be a winner in all things pastry related. I’ve been experimenting with it more and more, and the crumbly texture and nutty, decadent flavors make it perfect for gluten-free pastry making.

Of course, combining it with a natural binder like tapioca or arrowroot flour really allows it to stick in scenarios like rolling out a pumpkin pie crust.

For this recipe, the gluten-free almond flour crust is supposed to be damp, but not sticky. So if it sticks to your fingers as you compact it into a ball, you need to add small amounts of flour until you hit the desired damp consistency.

Aside from potential stickiness, this pie crust recipe holds together very well; even better than a traditional pie crust made from wheat flour.

I’ve also never really liked pie crusts to start, but this almond flour crust is to die for. I’m no longer peeling back the crust to avoid eating it, but instead savoring every bite!

The reason this vegan gluten-free pumpkin pie is so delicious is that it is made from butternut squash.

Now, you might be thinking, “why did you call this recipe a pumpkin pie if it isn’t actually made from pumpkin?!”. Well, contrary to popular belief, many pumpkin pies (canned fillings, or the pie themselves) are made from one or more types of winter squash.

Butternut, Hubbard, Boston Marrow, and Golden Delicious are popular squashes often used in place of pumpkin in pumpkin pie. This is because they are sweeter, less stringy, and have a much more vibrant orange hue than pumpkins do. If you’ve ever roasted a pumpkin before, you’d know that the flesh is much more yellow than orange.

The pumpkin pie filling made from butternut is a serious gamechanger. I’ve made pumpkin pies from actual pumpkin before, and believe you me, they did not taste as good as the ones I made from butternut. Butternut and pumpkin actually taste very similar once cooked, but butternut is sweeter and creamier. Who doesn’t want a sweeter and creamier pie, made 100% from nature herself?

The filling is also super easy to make, too. All you need to do is add the roasted squash, some maple syrup, coconut milk, arrowroot flour, and pumpkin pie spice to a blender. Blend, and you’ve got your filling!

My mother and sister have told me this is the best pumpkin pie they’ve had. And trust me, they’re pumpkin pie fanatics just like myself.

If you do end up making this recipe, be sure to tag #livelovefruit on Instagram or leave a comment below! 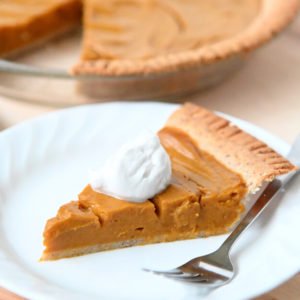 If you don’t want the pie crust edges to burn in the final stages of cooking, you can cut out a circle of parchment paper that has the inner circle cut out. You should be left with a giant ring that you can place on the crust edge while the pie cooks.
Keyword gluten-free, pumpkin pie, vegan