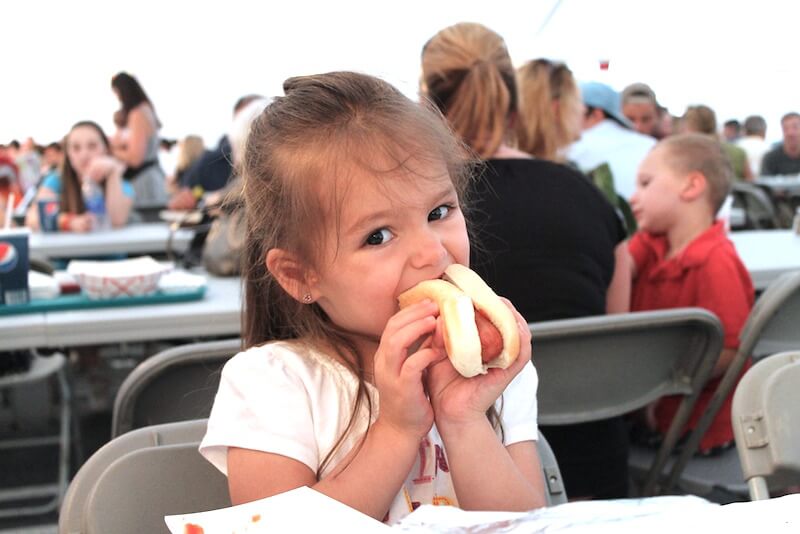 Doctors are urging parents all over the country to “stop feeding your kids hot dogs!” – but why are they just saying this now? An American favourite, hot dogs are a staple in most households. I remember eating them for “special” school lunches, or chopped up in Kraft Dinner. In fact, over 155 million wieners are consumed every fourth of July nation-wide. That’s a LOT of hot dogs!

However, new research has shown that kids who consume more than a dozen hot dogs per month are nine times more likely to develop childhood leukaemia – a blood cancer where the bone marrow and other blood-forming organs produce increased numbers of immature or abnormal leukocytes. These abnormal leukocytes suppress normal blood cell production, which can lead to anemia and other symptoms.

What’s So Bad About Hot Dogs?

The main ingredient in hot dogs that makes them so cancerous is nitrates. Nitrates are an additive added to hot dogs (and other processed meats like cold cuts) to combat botulism. During the processing of cooking the hot dog, nitrates combine with amines that are naturally present in the meat to form N-nitroso, which is highly carcinogenic.

Nitrates can also be found in vegetables grown in fertilizers, but thankfully, vegetables come with their own set of compounds that fight nitrosamine production. According to Fooducate, “Spinach, beets, lettuce, celery, parsley, and cabbage are naturally high in nitrates. The level of naturally occurring nitrites is determined by the plant’s genetics, age, and also the amount of nitrate in the soil where the crops were farmed. Due to increased use of nitrate fertilizers in the last century, these figures are high. But don’t stop eating these veggies, many of them also contain vitamin C, naturally limiting the formation of the toxic nitrosamines.”

Hot dogs are also incredibly high in cholesterol and sodium. Just one dog contains 50mg of cholesterol and 620mg of sodium. The fat content in hot dogs is also worrisome. Hotdogs derive 70-90% of their calories from fat, specifically, saturated animal fat that clogs arteries and veins.

How To Avoid Nitrate-Filled Foods

1. Minimize consumption of processed meats and cured meat products like hot dogs, sausage and cold cuts.
2. Check labels, and make sure products that list sodium or potassium nitrates and nitrates are avoided.
3. Try your best to eat organic foods. Synthetic nitrates and nitrites are not allowed as preservatives in organically grown and harvested foods and meats.
4. Eat a high-antioxidant diet, rich in vitamin C to help reduce conversion of nitrates and nitrites to nitrosamines (according to this source).

How Are Hot Dogs Made?

A U.S. Department of Agriculture official confirmed that “hot dogs contain parts of pork stomach, snout, intestines, spleen, edible fat AND lips.” If that doesn’t turn you off, I don’t know what will.

Once all of these parts are assembled, artificial nitrates are added, and then this gets ground and mixed with water until it resembles a pile mushy slime. It then gets passed through a cold that turns the slime into its familiar hot-dog shape.

See for yourself in the video below.