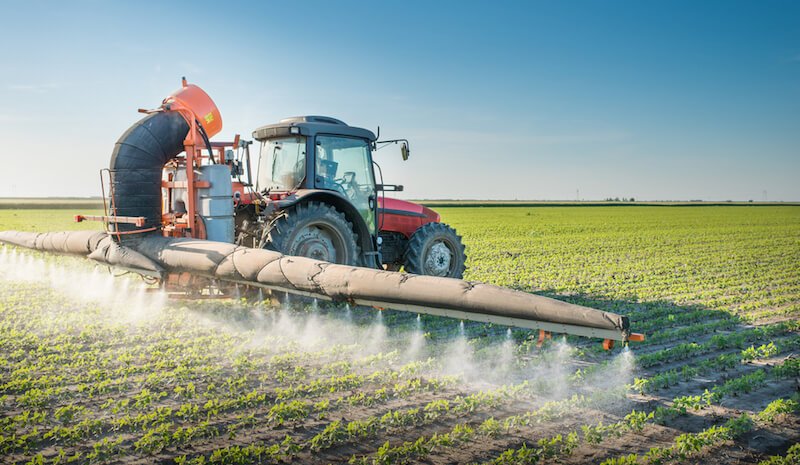 The term “gluten-free” has viciously popped up everywhere over the last decade. Back in the day, people who kept gluten out of their diets were doing so to prevent flare-ups from Celiac disease. While this is still a legitimate reason why some individuals need to keep wheat out of their diets, others are choosing to drop wheat from their diets out of personal choice.

Some may blame the gluten for giving them symptoms (celiac or not), but could something else be going on here? Perhaps wheat is toxic for reasons other than the protein most individuals blame it on.

Gluten is a general name for the proteins found in wheat (wheat berries, durum, emmer, semolina, spelt, farina, faro, graham, KAMUT khorasan wheat, and einkorn), rye, barley, and triticale (a cross between wheat and rye) (1). Think of gluten like a glue that holds food together.

Gluten is only bad for certain people. These individuals have a sensitivity to gluten, or are gluten-intolerant, meaning their bodies produce an abnormal immune response when breaking down gluten during digestion.

The most well-known form of gluten intolerance is celiac disease. When someone with celiac disease eats gluten, it triggers an immune response whereby the intestinal tract is damaged, preventing them from absorbing vital nutrients.

Irritable bowel syndrome (IBS) is another condition affected by gluten, as well as non-celiac gluten sensitivity (NCGS). When consuming gluten, individuals with NCGS may experience many celiac symptoms like diarrhea, fatigue, and joint pain, but don’t experience damaged intestines.

The Real Reason Wheat is Toxic

The use of glyphosate (the active ingredient in the herbicide Roundup), has dramatically risen over the last 15 years. And while wheat is not a genetically modified crop, the use of glyphosate on these crops has become a routine practice that has unfortunately affected many across North America.

The use of Roundup (and other herbicides containing the deadly active ingredient glyphosate) as a desiccant for wheat and barley was suggested as early as 1980. Essentially, these herbicides are used as drying agents 7-10 days before harvest.

According to Dr. Stephanie Seneff, a senior research scientist at the Massachusetts Institute of Technology (MIT), when wheat is exposed to a toxic chemical like glyphosate, it releases more seeds, resulting in a slightly greater yield. “It ‘goes to seed’ as it dies. At its last gasp, it releases the seed,” said Dr. Seneff (2).

The results? A slightly greater yield. 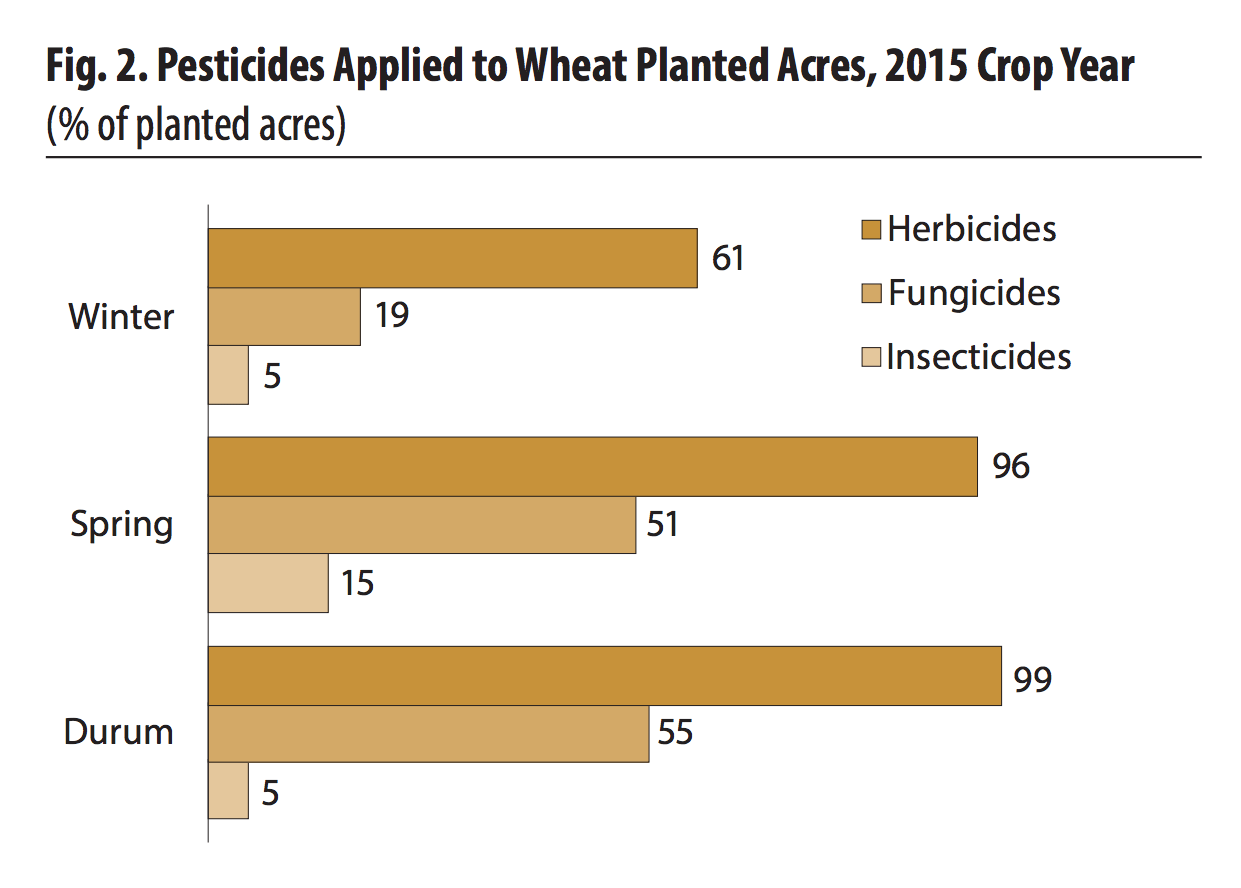 “I have been a wheat farmer for 50 yrs and one wheat production practice that is very common is applying the herbicide Roundup (glyphosate) just prior to harvest. Roundup is licensed for pre-harvest weed control. Monsanto, the manufacturer of Roundup claims that application to plants at over 30% kernel moisture result in roundup uptake by the plant into the kernels. Farmers like this practice because Roundup kills the wheat plant allowing an earlier harvest.

A wheat field often ripens unevenly, thus applying Roundup pre-harvest evens up the greener parts of the field with the more mature. The result is on the less mature areas Roundup is translocated into the kernels and eventually harvested as such.

This practice is not licensed. Farmers mistakenly call it “desiccation.” Consumers eating products made from wheat flour are undoubtedly consuming minute amounts of Roundup. An interesting aside, malt barley which is made into beer is not acceptable in the marketplace if it has been sprayed with pre-harvest Roundup. Lentils and peas are not accepted in the market place if it was sprayed with pre-harvest Roundup….. but wheat is ok.. This farming practice greatly concerns me and it should further concern consumers of wheat products.”

The pre-harvest use of glyphosate allows farmers to harvest crops up to two weeks earlier than they normally would – a major advantage for farmers in the Northern hemisphere. This makes desiccation favourable in the Northern states like North Dakota, as well as Canadian provinces like Saskatchewan and Manitoba.

“Desiccation is done primarily in years where conditions are wet and the crop is slow to dry down,” said Joel Ransom, an agronomist at North Dakota State University (4).

“I think farmers need to realize that all of the chemicals we use are ‘bad’ to some extent,” he said. “Monsanto has done such an effective job marketing glyphosate as ‘safe’ and ‘biodegradable’ that farmers here still believe this even though such claims are false (5).”

Gerald Wiebe, a farmer and agricultural consultant, believes that the use of glyphosate on wheat may be connected to the rise in celiac disease. “We’ve seen an explosion of gluten intolerance,” he said. “What’s really going on?”

So now that we know most of the non-organic wheat supply is contaminated with glyphosate, and that a large percentage of processed foods are made from wheat, what happens when we consume these foods?

The use of glyphosate on wheat crops has risen in tandem with the rise in celiac disease. The chart below demonstrates just that. A 2013 study published in the Journal Interdisciplinary Toxicology examined glyphosate pathways to autoimmune disease. As illustrated in the chart below, the usage of glyphosate on wheat in the U.S. has risen sharply in the last decade, in step with the sharp rise in the incidence of celiac disease. 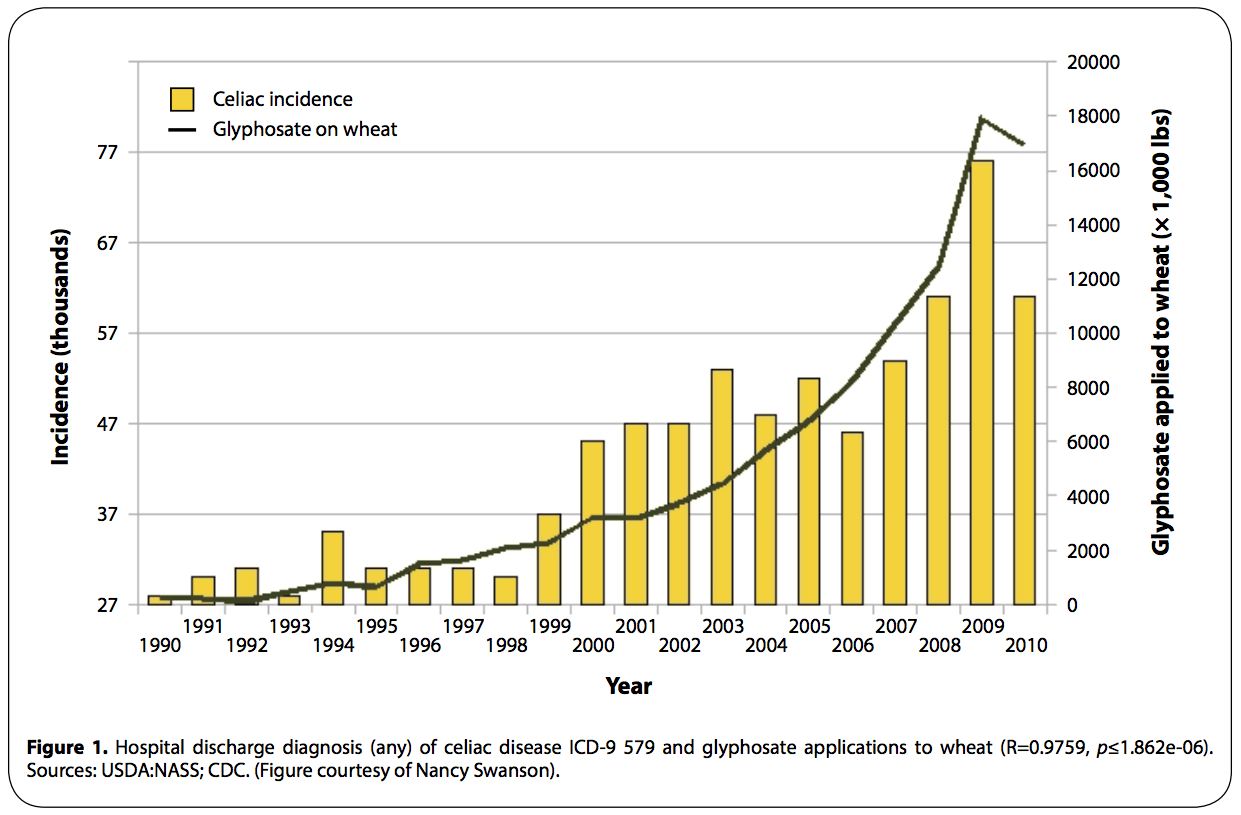 While the herbicide industry (like Monsanto) claim that glyphosate is minimally toxic to humans, research proves otherwise.

Glyphosate has been shown to damage your gut flora and cause chronic diseases rooted in gut dysfunction (like gut inflammation and leaky gut). What happens is that the villi in your gut get destroyed by the glyphosate, reducing your ability to absorb vitamins and minerals (7).

Wheat also contains gliadin, which is difficult for the body to break down. Under normal circumstances, a reaction takes place between the different proteins found in wheat – ultimately making it digestible. But when glyphosate comes in the picture, it attaches to gliadin during these reactions, and your body then develops an immune reaction.

“Gut dysbiosis, brought on by exposure to glyphosate, plays a crucial role in the development of celiac disease. Many cytochrome P450 (CYP) enzymes are impaired in association with celiac disease, and we show that glyphosate’s known suppression of CYP enzyme activity in plants and animals plausibly explains this effect in humans (8).”

When your gut is inflamed, your body’s ability to transport sulfate is significantly impaired. Sulphur is the third most abundant mineral in the body. It makes up vital amino acids used to create protein for cells, tissues, hormones, enzymes and antibodies.

This is why Dr. Seneff recommends soaking in Epsom salt baths (aka. magnesium sulfate), rather than taking sulfur supplements, because this way, it can bypass your gut mucosa.

Not surprisingly enough, the sulfur pathway is also implicated in celiac disease, thus making the connection between glyphosate exposure and celiac disease even more clear:

“There are two classes of molecules that transport sulfate. One is the sterols: cholesterol, vitamin D, and all sex hormones – estrogen, testosterone, and DHEA. On the other side, you have all the neurotransmitters. This is the dopamine, melatonin, serotonin, and the adrenaline. All of those transport sulfate. They’re all derived from this pathway that glyphosate disrupts,”  Dr. Seneff explains.

“Glyphosate disrupts the shikimate pathway, which is a biological pathway in plants and in microbes. That pathway produces the precursors to all those neurotransmitters. When you can’t produce those precursors… because of the glyphosate, you become deficient.

This links directly to celiac disease because serotonin is very strongly implicated in celiac disease. In fact, you have an overproduction of serotonin whenever you have dietary tryptophan. In celiac, these cells are hyper-sensitized. They take in the tryptophan and make serotonin out of it.

Tryptophan is one of the products of this pathway that glyphosate disrupts. Your body is really eager to grab every bit of tryptophan it can find in the diet and immediately turn it into serotonin… But too much serotonin causes diarrhea. That’s how you get a connection to the celiac disease behaviour.”

The negative impact of glyphosate exposure is slow and can take over months and years until you start experiencing symptoms. The consequences of this exposure is chronic inflammation, which, if you don’t already know, is how most disease and illness starts.

This list isn’t all-inclusive. I could add to the list for days, and I still wouldn’t cover the amount of symptoms, disease and illness that have come about over the years as a result of herbicide and pesticide exposure.

If you think you have no trouble digesting wheat – think again. Avoiding conventional wheat as much as possible in your diet (think processed foods, boxed foods, baked goods, frozen foods, etc.) is a wise choice.

The bottom line of this article is to stop consuming conventionally-grown wheat. If the wheat isn’t organic, stay away from it. This means all wheat products, including the popular meat substitute seitan or vital wheat gluten.

If you aren’t celiac or gluten sensitive, you can source organic, naturally low in gluten wheats like spelt or unhybridized Einkorn wheat to make bread, muffins, cookies and more.

I personally avoid wheat altogether, and haven’t eaten it in over 10 years. I find that buckwheat is an amazing substitution if you’re wanting to make breads, or even pancakes (check out my 2-ingredient buckwheat bread, and my buckwheat pancakes – they’re to die for!).

Again, when buying any grain, pseudo or not, always make sure it is organic.