Aquafaba might sound like the latest teen band, but the term was coined for something far from it – the liquid that comes from the starches and protein of cooked chickpeas!

Whether you’re on a diet that restricts you from eating eggs, or you happen to have an allergy to them, aquafaba might be your best bet in getting something that resembles them the closest.

Aquafaba is the liquid leftover from cooked chickpeas. You know, that liquid you discard when you open a can of chickpeas and let it drain into the sink.

If you’re like me, then you’ve likely done this multiple times thinking there was no possible use for this liquid. But let me tell you – there is!

Aquafaba happens to be the perfect vegan egg substitute for all your baking and cooking needs.

Aquafaba is Latin and translates to “bean water”. This water becomes cloudy and viscous through a process called reverse osmosis. When beans are soaked and cooked, they absorb the liquid they are cooked in. During the cooking process, the water-soluble proteins and sugars inside the chickpeas eventually travel into the cooking water. The longer the beans are cooked, the more this migration occurs (hence why different brands of chickpeas have varying levels of aquafaba thickness – each company cooks their chickpeas at varying lengths of time).

The remaining protein- and sugar-enriched water is composed of polysaccharides, sucrose, and various proteins. Chemically, the mixture is quite similar to that of egg whites, so it makes sense that it functions the same.

While chickpeas are highly nutritious, aquafaba comes with little, if any, nutrition at all. It is neutral in taste and nutrition, which makes it great as a substitute in many recipes. It can be used in pancakes, cookies, brownies – you name it. Just don’t use it as a substitute for eggs in a quiche. You’d want to substitute actual chickpea flour for that.

How To Use Aquafaba

When using aquafaba as a vegan egg replacement, try the following conversion rates:

For one whole egg, you’ll want to take your aquafaba and use it as is. So all you’d need is a bowl and colander to reserve the liquid from the chickpeas and then use the chickpeas for a different purpose (roasted chickpeas anyone?).

While you can use the reserved liquid from a can of chickpeas, you can also make your own. All you need to do is cook your own chickpeas and reserve the leftover cooking liquid. As you might have guessed, this method takes much longer and many people probably aren’t willing to do it. But it does negate some of the potential harms of BPA-lined cans for companies that still use them.

While aquafaba is a very recent discovery in the recipe-food world, many people have been finding multiple uses for it, while have proven highly effective.

You can either use the aquafaba liquid by itself in recipes that call for whole eggs, or you can whip it to replace ingredients like whipped egg whites for things like meringues, mousse, macaroons, and mayo. It can even be used for ice cream too!

Here is your step-by-step guide to making aquafaba: 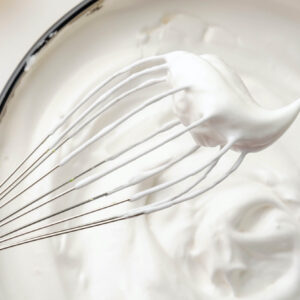