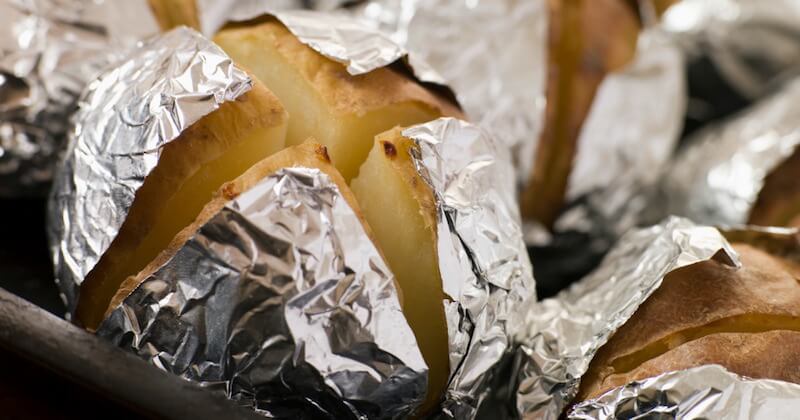 People have been cooking with aluminum foil for years, but only now are we discovering the health risks associated with it.

Aluminum is actually the most widely distributed metal on the planet, and is used in the production of many every-day products. It is found in aluminum cooking ware, soda cans, canned goods, aluminum foil, and aluminum utensils. It is also found in vaccines, deodorants, aspirin, antacids, baking powder and even flour.

The amount of aluminum we are exposed to everyday is pretty shocking, and the worst part is, is that we don’t require aluminum to survive. In fact, it’s more harmful than beneficial. It might make you question – should I really be cooking with aluminum foil?

According to the World Health Organization (WHO), human bodies are capable of eliminating small amounts of aluminum efficiently, so it’s considered safe to ingest about 40 mg per kilogram of body weight per day. So for a person who weighs 60kg, the allowable intake would be 2400mg. Unfortunately, at the levels we’re exposed to, most people are ingesting far more than this amount.

You probably find yourself cooking with aluminum foil all the time. Whether you wrap a potato to bake it in the oven, or want to cook some corn over the grill, aluminum foil is quite convenient.

Ghana Bassioni, Associate Professor and Head of the Chemistry Division at Ain Shams University, conducted research with a group of colleagues that explored the use of aluminum for cooking and preparing food at high temperatures. In her research, she found that the migration of aluminum into food during the cooking process of food wrapped in aluminum foil is above the permissible limit set by the WHO (2).

“The acidity of the food would enhance further leaching of aluminum into the meal,” she said, adding: “How aluminum will actually harm your body depends on many factors like your overall well-being and consequently how much your body can handle accumulation of it in relation to the allowable dosages set by the World Health Organization.”

The researchers found dangerously high levels of aluminum in foods after being cooked, reheated, and even cooled on aluminum foil.

Aluminum is also significantly more likely to leach into food, and at higher levels, when there is some sort of acid and liquid combination in the foil itself. So, if you’re cooking a piece of chicken with lemon and tomato juice, you’ll have much higher levels of aluminum in your food. The acidity of these solutions sparks an aggressive process that dissolves layers of aluminum into the food. Aluminum levels peak even higher when more spice is added to the food.

While cooking with aluminum foil is not recommended, you can still use it to wrap cold food. However, avoid keeping it wrapped for long periods, as the foil can break down and leach aluminum over time (especially if there are spices in the food it comes in contact with).

Scientists have been looking at the potential threat that overexposure to aluminum may have on human health for years, and have found some disturbing results.

Because your body doesn’t actually need aluminum foil, it doesn’t really know what to do with it when it enters the body. While our bodies will detox small amounts over time, it isn’t necessarily prepared for the amounts that we ingest day in, day out. As a result, excess aluminum accumulates and stores in our kidneys, brain, lungs, liver and thyroid, where it competes with calcium for absorption and can affect skeletal mineralization (3).

Aluminum and The Brain

Aluminum has a high affinity for brain tissues, making it a serious risk factor for Alzheimer’s disease and other neurodegenerative disorders (4). Researchers have even found that aluminum has the ability to reduce the growth rate of human brain cells (5). Not only that, but studies have also been conducted where high concentrations of aluminum were found in the brain tissue of patients with Alzheimer’s disease (6).

As research has shown, aluminum produces toxic, oxidative stress in the brain, and the effects may not show until we are well into our 70’s and 80’s. One study performed brain autopsies of elderly individuals and found them to have aluminum levels 20 times higher than those who are middle-aged (7).

Even the Agency for Toxic Substances and Disease Registry, part of the U.S. Department of Health and Human Services, recognizes aluminum as one of several metals known to negatively affect our neurological system (8).

Aluminum and Our Bones

Aluminum doesn’t just build up in and around the brain, but it can also accumulate around your bone tissue. Studies have shown that aluminum competes with calcium in the bone remineralization process, and have linked high levels of aluminum in the body with brittle bones and osteoporosis (9, 10).

According to a study published in The Journal of Nephrology Dialysis Transplantation, “Aluminum can induce changes in bone remodelling via two main pathways: by acting directly on the matrix formation and mineralization, and, indirectly, by depressing parathyroid function, which in turn, will influence the bone remodelling (11).”

The authors go on to say that the most “revenant toxic effect of aluminum on bone is its capacity to reduce mineralization, probably acting through different mechanisms such as altering the influx and efflux of calcium from bone cells, and also reducing the calcium uptake from osteoblasts.”

When your brain is exposed to high levels of aluminum, the metal crosses the blood-brain barrier and builds up around the hippocampus, cortex, and other regions that are also linked to Alzheimer’s disease.

As aluminum builds up in the brain, it starts competing with other essential metals your body and brain can actually use like magnesium, calcium and iron (12).

Take iron for example. As explained by the authors in the study cited in the point above (13), the interference of aluminum in iron uptake at the cellular level has been supported by results obtained in red blood cells (RBCs) from patients who were accidentally over-loaded with aluminum. After 6 months of aluminum exposure, patients showed a significant reduction in their intra-erythrocytic ferritin levels, demonstrating that aluminum can interfere with iron uptake from RBCs.

Aluminum and Our Liver & Kidneys

If we consume too much aluminum, the detox organs in our body become overloaded with the task of getting rid of as much of it as they can. If our kidneys and liver are already impaired as a result of too much stress from constant toxin-overload, then aluminum is instead retained, and accumulates in our body tissues (14).

Aluminum and The Thyroid

While it is questionable as to whether aluminum has a direct effect on thyroid health, there is plenty of evidence that aluminum exposure can affect the parathyroid glands, and might suppress the release of parathyroid hormone (15, 16).

What To Use Instead of Aluminum

Instead of cooking with aluminum foil, opt for glass cookware, and instead of storing your food in aluminum, use glass reusable containers instead. If you must use aluminum, do not use with spices or acidic foods.

Also recognize that aluminum foil is not the only way we are exposed to aluminum. Try to avoid conventional hygiene products made with aluminum like antacids and deodorant, and avoid processed and frozen foods (their containers often contain aluminum).

If heavy metals are a concern for you, consider checking out my heavy-metal cleansing juice. Foods like cilantro, wild blueberries, Hawaiian spirulina and dulse are all great at removing heavy metals from the body.