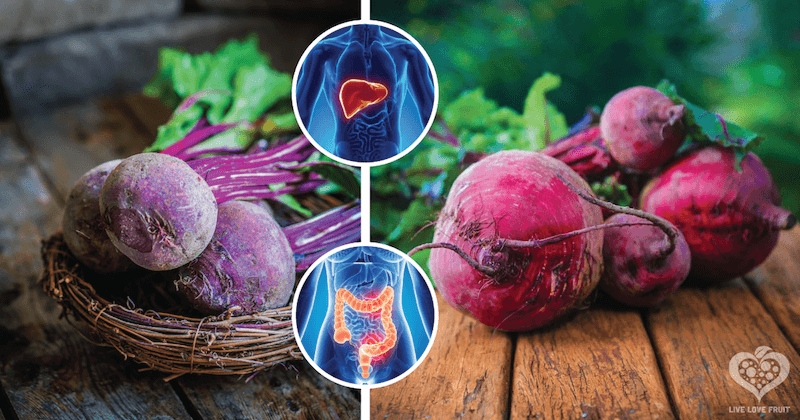 Touted as one of the healthiest vegetables, it is no wonder that beetroot ranks so high. With its deep reddish/purple hues, you can be rest assured that this vegetable is jam-packed with beneficial phytonutrients and antioxidants!

Beetroot has been used as a natural medicine, with reports of its use dating back to Roman times (1). Beetroots also come in different colours, ranging from bright pink, yellow and orange, with some varieties possessing a beautiful concentric circle pattern.

You can easily incorporate beets into your diet – adding a cup of beets to a juice, smoothie, or salad is more than enough to reap the incredible benefits this vegetable has to offer. And don’t skip on the beet greens, either! They actually contain more disease-fighting antioxidants than the beet itself!

The Amazing Health Benefits of Beets

Here are just a few reasons to eat more beets!

One of the most largely studied features of beetroot would have to be their richness of dietary nitrate (which not many other foods have). Nitrates, found in beetroot and a few other leafy vegetables are converted to nitric oxide in the body. This compound relaxes and expands blood vessels, increasing blood flow, thereby reducing blood pressure (2). Betaine in beets also prevents the build-up of homocysteine in the blood, which can normally lead to problems with the circulatory system.

Any simple search on the internet will come up with multiple scientific articles that have studied the effects of beets and their cytotoxic effects on cancer (3, 4, 5, 6). It is no wonder, seeing as how beets are naturally high in disease-fighting phytonutrients, antioxidants, vitamins, and trace minerals. Particularly, betalains (categorized as betanin and vulgaxanthin) have been studied for their cancer-protective and anti-inflammatory properties. Betalains have been shown to help protect the body from developing cancers such as stomach, lung, colon, prostrate, and breast cancer.

Betaine, betalain, and pectin in beetroot all support liver function. Betaine prevents fats from accumulating in the liver to prevent fatty liver disease as well as cardiovascular disease. In regards to the liver, betaine helps reduce insulin and glucose levels, as well as triglycerides and hepatic fat (7). Another study found that beetroot juice protects the liver and increases the activity of phase II enzymes (meaning that it encourages detoxification by helping the liver more quickly shuttle toxins and drugs to the kidney for excretion via urination).

This colourful root contains powerful antioxidants that fight inflammation and cell damage inside the body. Although beets as a whole fight inflammation, this is particularly thanks to their betaine compounds, which are activated within the body from a nutrient called choline (derived from B vitamins). These anti-inflammatory compounds have been found to inhibit the activity of cyclo-oxygenase enzymes, which the body uses to trigger inflammation. This effect has been found to be more effective with raw beets compared to cooked beets (8).

It is no wonder that beets provide us with beautiful skin. After all, they support the detox organs (liver, kidneys and digestive tract) in more ways than one, and if you haven’t heard, your skin is a direct indicator of how well these organs are functioning. This, in combination with their high concentration of antioxidants make them one of the best skin foods you could consume. They are also naturally high in folate, a B vitamin critical for skin health, and skin cancer prevention (9).

Beetroot juice supplementation has also been studied through its ability to improve muscle oxygenation during exercise (10). This is due to the high concentrations of nitrate, which gets converted to nitric oxide in the body. Nitric oxide has the potential to enhance exercise tolerance during long-term endurance exercise. The overall oxygenating effects of beets in the body also make it perfect for anyone suffering from cardiovascular, respiratory, and metabolic diseases, as well as individuals who find physical daily activity difficult (such as the elderly).

Researchers at Wake Forest University found that drinking beetroot juice can increase blood flow to the brain in older adults (11). Poor blood flow to the brain contributes to many disease states, and is also a factor in the decline of physical and cognitive function as we age. Dietary nitrate, such as that which comes from beets, was found to improve regional brain perfusion in older adults in critical brain areas used for executive functioning.

“Nitric oxide is a really powerful molecule. It goes to the areas of the body which are hypoxic, or needing oxygen, and the brain is a heavy feeder of oxygen in your body.” – Jack Reieski, study co-author (12).

So if you want to avoid dementia and Alzheimer’s later in life, drink at least a cup of beet root juice every day. Your brain will love you for it!

Different phytochemicals found in beets can help balance out hormones and increase estrogen production to minimize PMS symptoms. Beets are also high in iron and folate, which can help prevent anemia, fatigue and irritability during moon time, as well as to help regulate menstrual cycles. Not only that, but beets can help you maintain a healthy sex drive, all thanks to nitrate and boron, both of which increase blood flow to the reproductive organs. Nitrate and boron also help to regulate the production of human sex hormones (15)!

Beets contain tryptophan, an amino acid, which when metabolized, gets turned into serotonin in the brain. Serotonin is that feel-good “happy chemical” that makes you feel reeeeeeally good. Not just that, though. Beets are also high in betaine, which initiates the metabolization of a body chemical called S-adenosyl-methionine, a natural anti-depressant (16). So the next time you’re feeling a little down in the dumps, reach for some beet juice!