Category: > Health > Here Are 10 Foods That Literally Eat Your Bones (And 25+ Foods That Strengthen Them)
2.3K shares 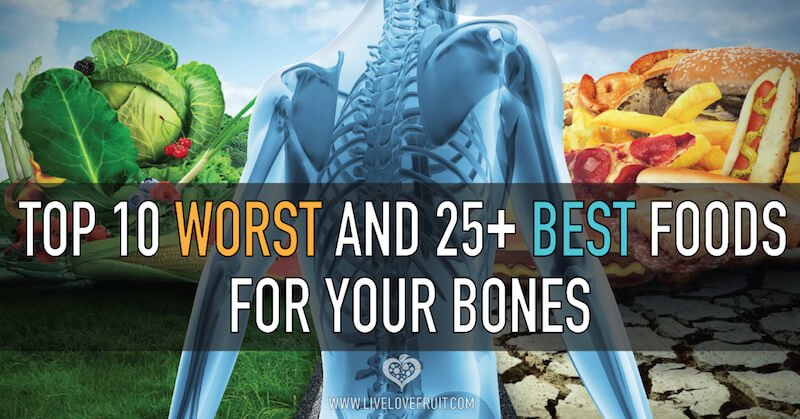 You might be surprised when you notice the foods you normally eat are actually the same ones destroying your bones. Although mainstream media makes you think these foods are good for bone health, the truth is that they’re not.

For example, the dairy industry spends billions of dollars each year to convince us that without their products, your bones will be weak and brittle and at risk for developing osteoporosis. Milk may be high in calcium, but that doesn’t take away from the fact that milk contains casein, a calcium-stripping compound. Milk also doesn’t contain Vitamin K or magnesium, two essential nutrients that are required for strong bone growth.

Foods that you eat should be providing nutrients to build strong bones, instead of blocking the bone’s ability to regenerate and strengthen itself. If you suffer from joint pain, arthritis, aching, stiffness, cartilage degeneration or other issues relating to bone health, you need to take a look at your diet and see how you can minimize the ingestion of certain foods.

10 Foods That Literally Eat Your Bones

So without further adieu, here 10 foods that literally eat your bones, and that you should consider swapping out of your diet:

As described above, dairy doesn’t help with bone health, and in fact, makes it worse. Ditching milk and dairy products will help prevent osteoporosis from developing, and also get rid of mucus problems as well as skin and gut issues. Because dairy products are acid-forming, they literally leach minerals out of your bones, and increase your risk of fractures over time.

A 12-year study conducted by The Harvard Nurses’ Health Study, which followed over 75,000 women, found that increased milk consumption had no protective effect on bones, and didn’t reduce fracture risk. In fact, increasing calcium intake from dairy actually increased fracture risk among those participating.

Instead, opt for making your own almond milk, or other plant-based milks.

All meat, poultry and fish are acidifying foods, and so should be eaten in moderation and in balance with foods that alkalize (or better yet, not at all). Highly processed meats and cold cuts should be avoided at all costs – they’re full of preservatives, colour and flavour enhancers like sodium nitrite, which are all potent acidifiers. Highly acidic foods strip crucial minerals from our bones to help buffer the acidity and increase the pH of the blood.

Processed, refined sugar is one of the most acidifying compounds you could put in your body. As stated above, highly acidic foods strip crucial minerals from our bones that normally make them healthy and strong. Sugar also harms collagen production, which makes up part of the bone matrix that gives your skeleton a flexible framework. Stay clear of processed sugar, and instead opt for seasonally ripe fruit or dried fruits like dates and figs!

Most of the white flour you use for baking, or the white bread you might be eating is bleached. You read that correctly – bleached. Bleaching uses toxic and acidifying chemicals like chlorine dioxide or benzoyl peroxide, with byproducts such as alloxan. Alloxan induces diabetes as it destroys insulin-producing cells. These chemicals are also harsh on our bones, as well as every other aspect of the human body. White flour is devoid of all nutrients that would normally nourish your bones, too. If you can, opt for flours that haven’t been bleached, such as whole wheat flours and gluten-free flours made from quinoa or rice.

America is one of the largest consumers of salt. Salt zaps calcium from your bones, weakening them over time. The more salt you consume, the more calcium is leached from your bones. One study found that increased urinary sodium excretion produces an increase in urinary calcium excretion. Consuming a high-salt diet will degenerate your bones at a faster rate, increasing the potential for injury. A great salt alternative that I make is by dehydrating celery into hard little bits, and then blending it into a fine powder. It is delightfully salty, but might take some getting used to if you consume a high-salt diet already.

Soft drinks are one of the worst offenders of destroying bones. People often drink more soda than they do water, which leads to major health problems. It is suggested that phosphoric acid in cola leaches calcium out of the bone, or that too much phosphorous inhibits calcium absorption. That, in addition to the amount of highly acidic processed sugar in soft drinks leads to a concoction that literally eats your bones. Instead of soft drinks, try making some flavoured water with cucumber and fruit.

Caffeine in energy drinks, sodas, and coffee, also accelerates bone loss. Caffeine interferes with calcium absorption, and leads to calcium loss through urine. Coffee is also acidifying, so it accelerates bone loss, especially if consumed in excess. Ditch the caffeine and opt for a tonic made from maca powder, herbal tea, and honey. You’ll be surprised at how great you feel!

Alcohol is detrimental to your bones. It is highly acidic and largely dehydrating. When your body is dehydrated, a lot of different things happen. Your skin becomes dull and wrinkly, and your organs start to malfunction. The process of bone remodelling (lifelong process where mature bone tissue is removed from the skeleton and new bone tissue is formed) is also affected. In order to properly remodel, bones require hydration, and plenty of water, but in a dehydrated body, this process is useless. When your body is in a dehydrated state, stress hormones are also produced, which accelerates bone loss.

Stay clear of trans fats. These are formed when liquid fats are infused with hydrogen atoms in a process known as hydrogenation. It essentially takes healthy fatty acids and converts them into unhealthy trans-fatty acids. These hydrogenated fats speed up the aging process, and cause severe inflammation in the body. Chronic inflammation can result in reduced bone density, which can later manifest as osteoporosis. Instead, opt for coconut oil, which when heated, doesn’t transform into trans-fatty acids (unlike most other oils, which have a lower melting point).

Too much protein is never a good thing. Eating too much of it can increase your risk for a variety of different health conditions, and could be as bad for you as smoking, according to a new study. Meat and other protein-heavy animal products like eggs and dairy contain sulphur-containing amino acids, which promote acid production in the body. To help buffer the acid, our body naturally draws on alkaline reserves in our bones to balance our pH level. These alkaline reserves include things like magnesium and calcium, which are needed to keep our bones healthy and strong.

How to Strengthen Your Bones

If you want to strengthen your bones the healthy way, consider incorporating the following foods into your diet: