Got Milk? More like, “got osteoporosis, cancer, skin and gut issues, and mucus build-up?” There are multiple reasons why you should ditch milk and dairy products, but these 10 reasons may finally just convince you to kick your habit to the curb.

Aside from the shocking actions of the dairy industry, which involve newborn baby calves being torn away from their mothers so that their mothers can be used for milk, and the baby for the veal industry (where they spend their miserable lives unable to turn around in tiny metal crates), milk can cause things like osteoporosis, cancer, constipation, diarrhea, asthma, ear infections, inflammation (i.e., arthritis), bronchitis, diabetes, high cholesterol and so much more.

“The biological purpose of cow’s milk is to support the rapid growth of a calf. Humans have no nutritional or medical need to consume the milk of cows or any other non-human species. Cow’s milk has significant levels of female hormones, and usually contains antibiotics, pesticides, saturated fat, and cholesterol — substances that definitely do NOT do a body good!” — Michelle McMacken, MD

Here are 10 shocking reasons why you should ditch the milk and dairy products, and opt for tasty nut-milks and cultured coconut yogurts and ice creams instead! 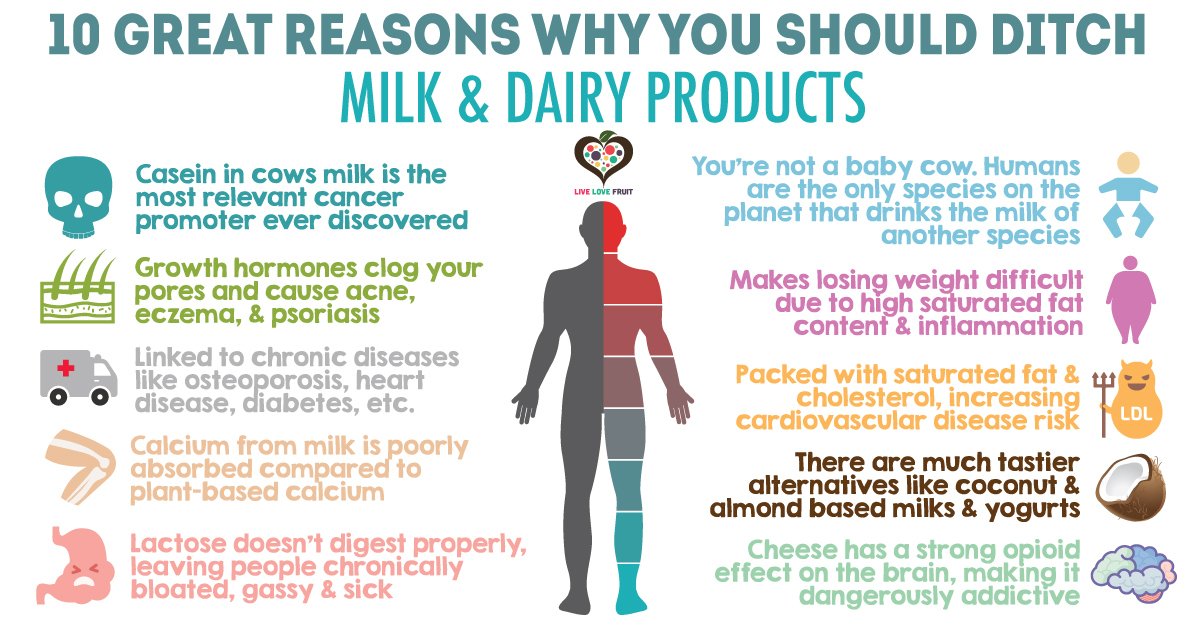 1. Contributes to extreme growth of cancer

“Casein, which makes up 87% of cow’s milk protein, is the most relevant cancer promoter ever discovered” – Dr. T. Colin Campbell, The China Study

“It appears that when individuals do not have the correct enzymes to metabolize many of the hormones naturally found in any type of cow’s milk, a glass of milk can flood the body with excess estrogen. This raises the risk of developing or accelerating the growth of existing breast cancer.” -Susan Wadia-Ells, Founding Director of Knowbreastcancer.net

“Some dairy products, such as whole milk and many types of cheese, have a relatively high saturated fat content, which may increase risk. Moreover, milk products may contain contaminants such as pesticides, which have carcinogenic potential, and growth factors such as insulin-like growth factor I, which have been shown to promote breast cancer cell growth.” -The American Journal of Clinical Nutrition

There are many cases that point to the fact that milk has the potential to cause cancer, specifically breast cancer. The growth factors (specifically IGF-1, the “Miracle-Gro” for cancer cells), and hormones in cows’ milk are not only linked to breast cancer, but they are also linked to other hormone-related cancers like prostate, ovary and testicular cancer.

Whether your milk is conventional, organic or raw, it will contain these naturally-occurring reproductive and cancer-causing hormones, since cows are milked while pregnant.

If you want good skin, don’t eat dairy! Milk and dairy products contain inflammatory substances and growth hormones that clog your pores and cause acne, psoriasis, eczema, and dermatitis. I have heard many accounts of people quitting dairy and their skin clearing up, myself included.

IGF-1, a hormone found abundantly in milk, also triggers inflammation in the body, triggering ugly redness and swelling that makes acne so difficult. Your body also produces excess sebum (oil) upon dairy consumption, which creates a breeding ground for the P. acnes bacteria, who feed on sebum and produce inflammatory by-products.

The milk protein, casein, is not only linked to cancer, but it is linked to other chronic diseases like osteoporosis, heart disease, diabetes mellitus, hypertension, obesity, dementia, and allergies. The long-term health effects of milk and dairy consumption are often neglected, with people who fail to attribute their health woes to the one thing they can’t seem to get rid of – milk and dairy.

The American dairy industry heavily promotes the consumption of milk as your sole source of calcium. This, is in fact, a myth. Calcium from plant foods are well-absorbed by the body, much more than calcium from dairy.

Because dairy products are acid-forming, they literally leach minerals out of our bones.

So if you are consuming dairy to “make your bones stronger” then you may actually be doing just the opposite.

In fact, The Harvard Nurses’ Health Study, which was conducted over 12 years, and followed over 75,000 women, found no protective effect of increased milk consumption on fracture risk. In addition, increasing calcium intake from dairy products increased fracture risk amongst those participating.

Dairy is a big reason people are chronically bloated, and suffer from digestive issues. After a human baby turns two years old, they slowly stop producing the enzyme Lactase, which is required to digest the sugar, Lactose, found in milk. So, technically, we are all lactose intolerant, but because humans continue to drink milk far into adulthood, signs of poor digestion to milk go unnoticed. Since adults have no lactase to break down milk, the undigested milk sugars end up in the colon, manifesting as bloating, nausea, cramps, flatulence and diarrhea.

This one is pretty straight forward. A baby cow doesn’t suckle from a human breast, a cat breast, or any other breast other than a cow breast. We also wouldn’t drink milk from a pig, a dog, or a cat, so what makes cows’ milk any different? We are the only species in the world that drinks the milk of another species. Not only that, but humans consume milk long after weaning. Think about this connection, and question if you would ever wander into a field and suckle milk from a cow. If you wouldn’t, then why are you still consuming it?

The high saturated fat content in milk makes losing weight difficult. In addition, dairy products all contain varying amounts of lactose (milk sugar), and the protein in milk generates an insulin response, both of which hinder weight loss.

When I gave up dairy my bloating went away and my waistline slimmed dramatically!

It makes sense that milk and other dairy products would do this to a human being, considering the fact that milk is designed to help “fatten up” the baby (whether human or cow or goat). Cow’s milk is designed to grow a 90 pound calf into a 2000 pound cow. But not many people recognize this, and continue drinking it despite its body-fattening effects.

8. Packed with saturated fat and cholesterol

All milk products (and all animal products for that matter) contain cholesterol and saturated fat, but cheese is one of the worst culprits. Even if you are buying “lower fat” milk products, you still aren’t doing your body a favour. In fact, a 2011 Harvard study found that the milk sugar in skim milk may make you fatter than whole milk!

9. There are much tastier alternatives

There are SO many options to choose other than dairy! There are plant-based milks (hemp, hazelnut, oat, rice, almond, flax, and coconut), yogurts (coconut, almond), cheeses (raw cashew cheese, daiya cheese, etc.) and ice creams (ones made out of coconut are super yummy, but I prefer making my favourite – raw fruit ice cream!).

Which is probably why it is so hard to ditch the dairy habit in the first place. People love their cheese. Whenever I ask people if they could give up dairy the first thing they say is,

“oh, I could never give up cheese. It’s just TOO good!”

Well, what if I said that your brain is actually just addicted to cheese, and that the flavour isn’t really the thing that keeps drawing you back (trust me, smell cheese after being 5 years raw vegan, you will gag).

When our body digests milk, little protein fragments called casomorphins are created, which have a strong opioid effect on the brain. So we can kind of compare cheese to heroin – dependence can develop with ongoing “administration” (or consumption in this case), which can lead to extreme withdrawal syndromes if abruptly discontinued.

Giving up cheese can be hard, but sticking to a gradual discontinuance over the period of a week to two weeks will wean your brain off the euphoric feeling it receives after eating a bunch of cheese. It only took me one week to completely remove cheese from my diet, and I never thought once about it after the fact (mainly because I felt 500x better).