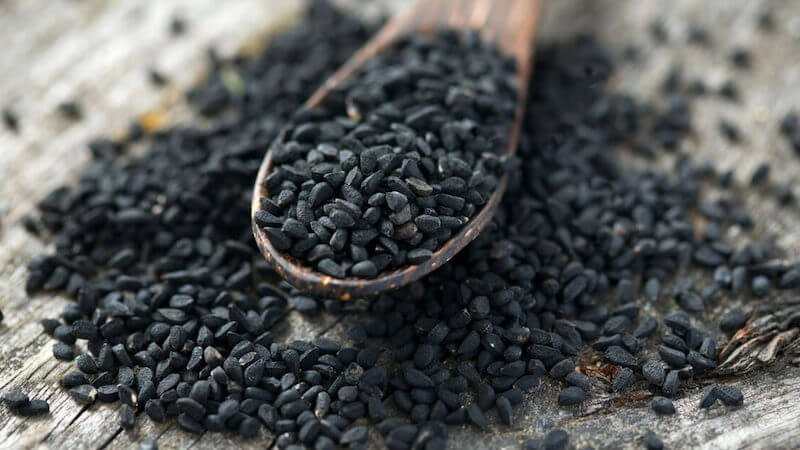 There are very few issues that black cumin seed cannot help the body overcome. Black cumin seed benefits are backed by hundreds of scientific peer-reviewed articles that confirm the claims made by early prophets regarding this tiny seed.

It is interesting to me that black cumin seed hasn’t been promoted throughout the health community like wild fire. Instead, things like kale and turmeric (while still quite beneficial) have taken the main stage.

What is Black Cumin Seed?

Black cumin seed (also called black coriander or black seed), comes from the Nigella Sativa plant that is native to Asia, the Mediterranean and Africa. Most people confuse black cumin seed for regular cumin, but it isn’t the same thing.

According to some reports, Cleopatra used black cumin seed oil to ensure luscious hair and soft, blemish-free skin. Hippocrates was also a fan of black cumin seed to help with digestive troubles.

In Arab cultures, black cumin is known as Habbatul barakah, which means the “seed of blessing.” The Islamic prophet Mohammed is also reported to have named black cumin seed as “a remedy for all diseases except death (3).”

Now, current research has been backing up these very claims. They’ve found that black cumin seed is an incredibly potent anti-microbial and contains three key compounds that assist the body in fighting disease. These compounds include thymoquinone (TQ), thymohydroquinone (THG) and thymol.

TQ, THG and thymol are important phytochemicals that benefit the body in multiple ways.

Thymoquinone (TQ) is a well-known antioxidant and anti-inflammatory with strong anti-cancer properties. It has been reported to help with encephalomyelitis, diabetes, asthma and carcinogenesis (4). Being an antioxidant, TQ helps scavenge free radicals in the body, and also helps preserve the master antioxidant glutathione (which protects the liver from toxins) (5).

Thymohydroquinone (THG) is a natural acetylcholinesterase (AChE) inhibitor, which stops enzyme activity, extending the time that the neurotransmitter acetylcholine stays active in the brain (6). The pharmaceutical industry has their own versions of AChE inhibitors, which are used to help with conditions like Alzheimer’s disease, autism, glaucoma, dementia, Parkinson’s disease, Schizophrenia and other neurodegenerative conditions (7).

Thymol is another active phytochemical found in black cumin seed, and is useful for fighting conditions like tuberculosis. It also acts as a wonderful general-purpose disinfectant, and an effective natural pesticide (8).

While these compounds are abundant in black seed, they aren’t the only ones. Other bioactive compounds in the seed include alpha-hederin, alkaloids, flavonoids, fatty acids vitamins B1, B2, B3, calcium, folate, iron, copper, zinc and phosphorous.

Black cumin seed benefits range from cancer prevention, all the way to diabetes management. There are now over 650 peer-reviewed studies that have looked into the health benefits of black seed. Some of the most compelling research is highlighted below.

Black seed oil has been shown to naturally beat and treat cancerous cells. This is mainly thanks to high levels of thymoquinone found within the seed. Research published in Drug Discovery Today made note that thymoquinone has a long history of battling cancer in vitro and in vivo, and modulates nine of the ten hallmarks of cancer (9). Another study published in the journal Experimental Oncology found that thymoquinone and thymohydroquinone resulted in a 52 percent decrease in tumor cells in an animal model (10).

Other studies have found that thymoquinone is effective in initiating cell death in leukemia cells, breast cancer cells and brain tumor cells (11, 12, 13). In addition, it also appears to inhibit the development of pancreatic cancer (14).

Black cumin seed decreases oxidative stress, thanks to high levels of antioxidants and compounds like thymoquinone. As a result, it can help preserve the integrity of pancreatic beta cells. This is great news for diabetics, given oxidative stress decreases the efficiency of pancreatic beta cells, making it difficult for the body to properly modulate the production and release of insulin.

In fact, one study found that black seed “improves glucose tolerance as efficiently as metformin; yet it has not shown significant adverse effects and has very low toxicity (15).”

To be effective, individuals with diabetes should consume two grams of black cumin per day for three months. According to one study, this much black seed every day will help reduce fasting blood sugar and HbA1c, as well as increase the functionality of pancreatic beta cells (16).

According to one study performed on a group of obese men, black seed showed “significant weight loss and reduced waist circumference with a mild reduction in fasting blood sugar, triglycerides and low-density lipoprotein levels (17).” Another study published in the Journal of Diabetes and Metabolic Disorders that systematically reviewed plants with anti-obesity properties found that black seed oil was among the most effective natural remedies on the planet in reducing weight (18).

Black cumin seed provides vitamins A, B and C, along with minerals like calcium, potassium, zinc and magnesium. Essentially everything your skin and hair need to thrive and be healthy. The fatty acids found in black seed provide deep, long-lasting moisturization for the skin, as well as dry, brittle hair shafts. These fatty acids will also help reduce the appearance of fine lines and wrinkles.

One study found that black seed was just as effective as the skin cream Bethamethasone in reducing the severity of hand eczema (19).

Black seed also contains the compound nigellone, which research has found to work as an impressive antihistamine. This may help with those dealing with hair loss due to androgenic alopecia or alopecia areata (20). It can also help by maintaining the health of ones scalp by providing anti-inflammatory, anti-fungal, anti-bacterial, anti-viral and analgesic properties. It also helps keep the scalp moisturized and balances the production of oils.

A variety of different studies have found that black seed oil has anti-asthmatic effects, and depending on the cause of asthma, black seed was often more effective than conventional treatment (21). In another study, thymoquinone was found to be effective in reducing two inflammatory mediators of asthma and other inflammatory processes (22). For these very reasons, black cumin seed is also beneficial in reducing seasonal allergies.

MRSA, otherwise known as methicillin resistant staphylococcus aureus, is easily destroyed by black cumin seed oil. One study took several strains of MRSA and found that each one was sensitive to N. sativa, which confirmed that black seed oil can slow down or stop MRSA from getting out of control (23).

Another study wanted to determine just how potent black seed oil was against some MRSA-resistant superbugs, so they paired it against antibiotics like Amoxicillin, Gatifloxacin, and Tetracycline. According to the study, “Out of 144 strains tested, most of which were resistant to a number of antibiotics, 97 were inhibited by the oil of black cumin (24).”

Thymoquinone in black seed oil has also been shown to have protective effects on the heart (25). Not only does it help promote healthy cholesterol levels, but it has been shown to help normalize blood pressure levels as well (26). Thymoquinone found in black seed may also benefit endothelial dysfunction, which is often involved in cardiovascular-related disorders.

Scientists have also found that black seed oil boosts liver function and helps prevent damage and disease of the organ (27). This is important, given the liver has the important task of detoxing the body and getting rid of unwanted toxins that would otherwise settle in our fat cells and contribute to disease and illness down the road. The liver keeps the rest of your body happy and healthy, so consuming foods that support the liver (like black seed oil), will ensure it does its job properly.

Studies have also shown that black seed oil can be useful for:
– Improving fertility
– Aids in digestion (may decrease gas, bloating and stomach pain)
– Remedy for intestinal parasites
– Helpful in battling candida and fungal infections

Where To Buy Black Cumin Seed

When buying black cumin seed, or black seed oil, always be sure to purchase a brand that is 100 percent pure, therapeutic grade, cold-pressed and certified organic. I personally like the brand Madre Nature, but any brand that passes these qualifications should do. You can also purchase black cumin seed capsules if you’re not a fan of the spicy flavor.

How To Use Black Cumin Seed

Black cumin seed can be used in a variety of different ways. My personal favorite is consuming it internally by putting it in a salad, juice or smoothie. Others might prefer to take black seed in capsule form.

Black seed oil can also be used topically by diluting it in a carrier oil like jojoba oil. If you’re dealing with an inflammatory skin condition like dermatitis, eczema, psoriasis or acne, dilute black seed oil one to one with a carrier oil, and massage into the skin. You can also use it topically for areas of the body where you may be experiencing aches and pains.

Black seed oil can be used as a hair mask by letting the oil sit on your hair and scalp overnight (and then washing out the following morning).

However you choose to use it, black cumin seed oil should definitely have a place in your home! The benefits you’ll receive are limitless.