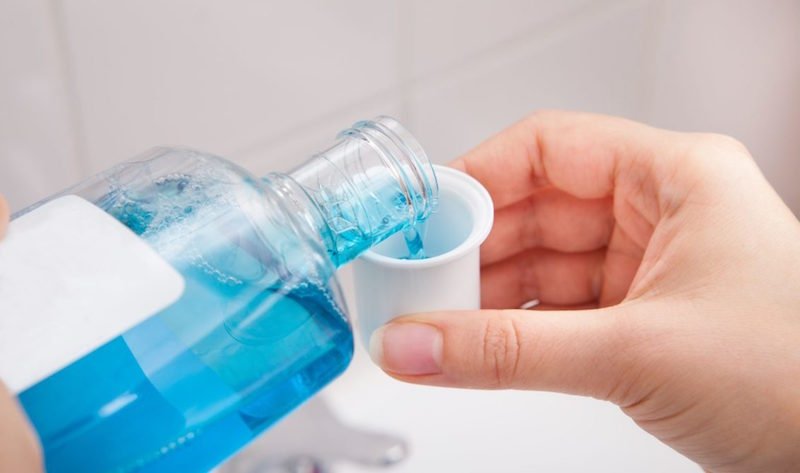 Although mouthwash is widely recommended by dentists for good oral health, recent studies hint that it may actually be doing more harm than good.

In fact, over 48,000 Americans and more than 640,000 people across the globe are diagnosed with mouth cancer (1). Now, this could be the combined effect of people avoiding brushing and flossing because they believe that swishing with some mouthwash will “clean” their teeth – but based on numerous studies, the ingredients in mouthwash are also to blame.

Ingredients in mouthwash include but are not limited to chlorhexidine. Every company uses different combinations of ingredients, which do, in some extent, keep the mouth fresh. However, like most products, they also add ingredients that are totally unnecessary and harmful.

Here are a few ingredients that often appear together on labels of popular brands like Listerine, Oral-B, Crest and Colgate (3,4,5,6).

According to a recent study published in the journal Free Radical Biology and Medicine, using mouthwash twice daily – such as Corsodyl – may increase blood pressure up to 3.5 millimetres of mercury (mmHg), raising your heart attack risk (7). A blood pressure raise by just two points can enhance the risk of dying from a stroke by 10%, and heart disease by 7%.

“Killing off all these bugs each day is a disaster, when small rises in blood pressure have significant impact on morbidity and mortality from heart disease and stroke.” Professor Amrita Ahluwalia, who led the study, told the Daily Mail. “We are not telling people to stop using antiseptic mouthwashes if they have a gum or tooth infection — but we would ask why anyone else would want to.” (8).

Alcohol-containing mouthwashes increase the risk of developing oral cancer. According to Professor Michael McCullough from Melbourne University, the alcohol in mouthwash breaks down into acetaldehyde, a known carcinogen. Although alcohol is mostly metabolized by the liver, the breakdown process begins in the mouth, making the mouth’s cells more vulnerable to cancer development, as well as cancer-causing agents (9).

This chemical is highly cytotoxic and causes skin, eye and respiratory irritations (10). It also interferes with cell division and vital metabolic processes. It is known to cause blood clots in the brain, allergic reactions and unstable heartbeat.

Methyl Salicylate can cause allergic reactions with symptoms like rash, hives, itching, shortness of breath, wheezing, cough and swelling of the face, lips, tongue or throat. If you’ve got flossing injuries or cheek bites, the chemical can enter the bloodstream, which can be incredibly toxic, even deadly.

This chemical has been found within breast cancer tissues (12) studies suggest that it may increase the risk of breast cancer or accelerate the growth of tumours. Like most parabens, methylparaben messes with our endocrine system, meaning that it interferes with hormone processing and increases risk of cancers involving hormones (i.e., breast, ovarian, prostate, etc.).

Keeping your teeth in tip-top shape requires a lot more work than just swishing your mouth with mouthwash.

Eating enough fresh, whole foods is actually the most important in keeping your oral health in tip-top shape. Minerals and fat-soluble vitamins from plant foods actually keeps our teeth stronger than you may have otherwise believed.

And if you eat a lot of nuts, beans, seeds and wheat-based products, you may want to think about how these foods are prepared. Most nuts, beans, and seeds come dried (except for beans which a lot of the time come pre-prepared), and need to be soaked and adequately sprouted before consumption. Soaking and sprouting helps get rid of phytic acid, which is an anti-nutrient that binds to magnesium, calcium, zinc and iron in your intestines and takes them out of your body.

Oil-pulling and brushing with homemade coconut oil toothpaste is another great way to help improve oral health. Activated charcoal is also great for getting rid of harmful bacteria, and as a bonus, makes your teeth sparkly white!

How To Make Your Own Mouthwash

There are many different recipes to making your own mouthwash, so below are just a few that I recommend:

1. ACV Mouthwash: 1 cup water and 2 tbsp. apple cider vinegar. Combine ingredients, and store in a glass jar. Shake well prior to use and swish mixture in mouth before spitting out. Keep on the counter.

2. Hydrogen Peroxide Mouthwash: 2 tbsp. water mixed with 2 tbsp. hydrogen peroxide. Swish in mouth and spit out. This is enough for a single use, discard any extra (need to re-make every day).

3. Herbal Mouthwash: create an herbal infusion by steeping 2 cups of boiling water, 1/2 ounce of whole cloves, 1 ounce of Oregon grape root, and 1 ounce of rosemary in a pint-sized glass mason jar, overnight. In the morning strain the infusion using a piece of cheesecloth. Swish in mouth, then spit out. Store in a glass jar in the refrigerator. Will keep for 1 week.

4. Green Tea Mouthwash: boil 1.5 litres of water in a large saucepan with 7 tablespoons of green tea and 1-2 tbsp. dried peppermint. Let mixture steep for 1 hour, and then strain into a glass jar. Add 500mL of water into the jar and then store this mixture in the refrigerator. Swish around this mixture for 5-10 minutes at night then spit out.