Category: > Environment > Whales Dying From Plastic Pollution Are a Grave Reminder to Give Up Our Addiction to Plastics
1.6Mshares

Plastic pollution in our oceans has become an issue that can’t be avoided any longer. With the number of whales dying from plastic pollution on the rise (not to mention many other marine animals), we must face our plastic addiction head on.

Plastic pollution is not only impacting our waters and marine life, but also the human food chain, and our overall health. How do we plan on living healthfully if we treat our oceans with so much disrespect?

Plastic bags are one of the worst, with around 500 billion plastic bags being used annually. More than one million bags are used every minute.

Sperm Whale Found with 64 Pounds of Plastic Waste in Stomach

A sperm whale was found washed ashore dead after swallowing 64 pounds of plastic debris. The sperm whale was found dead on the Murcian coast in southern Spain in late February. It wasn’t until early April that they discovered the culprit – plastic waste, ropes, pieces of net, and other debris lodged in its stomach (2).

The death of the sperm whale was a shocking reminder for how much work needs to be done in reducing our consumption of plastics (especially those that are single-use). Since the discovery, authorities in Murcia launched a campaign to clean up its beaches.

“The presence of plastic in the ocean and oceans is one of the greatest threats to the conservation of wildlife throughout the world, as many animals are trapped in the trash or ingest large quantities of plastics that end up causing their death,” Mucia’s general director of environment, Consuelo Rosauro said in a statement.

The necropsy results, released last week, listed some of the items scientists found stuck in its stomach and intestines: plastic bags, pieces of net, a plastic water container. The waste caused the whales digestive system to rupture given they couldn’t digest the waste they swallowed.

Officials are concerned, because not only are sperm whales endangered, but it is a grave reminder of the massive plastic pollution problem we have on our hands.

Other Whales Dying From Plastic Pollution

This male sperm whale isn’t the only one affected by plastic pollution. In 2016, fishing gear and an engine cover from a car were found inside the stomachs of sperm whales that beached themselves on Germany’s North Sea coast (3).

After a necropsy of the whales in Germany, researchers found that four of the thirteen sperm whales had large amounts of plastic waste in their stomach. The garbage included a 43-foot-long shrimp fishing net, a plastic engine car cover, and the remains of a plastic bucket (4).

The researchers suspect the whales died because they accidentally ventured into shallow seas chasing squid. Once they got lost, the whales became disoriented and died. Ursula Siebert, head of the Institute for Terrestrial and Aquatic Wildlife Research at the University of Veterinary Medicine Hannover, added that if the whales had survived, the garbage in their stomachs would have caused digestive problems down the line.

When whales and dolphins ingest marine litter, either accidentally or because they mistaken the trash for prey, it causes physical damage to their digestive systems. The undigestible litter gives the animals the sensation of being full, which reduces their instinct to feed, and leads to malnutrition, and eventually death.

In 2011, a young whale was found floating dead off the Greek island of Mykonos. The whales stomach was so distended that biologists thought the animal swallowed a giant squid. However, when the whales stomach was dissected, nearly 100 plastic bags and other pieces of debris were found (5).

And these aren’t the only marine animals suffering from plastic pollution. Many others, including seabirds, fish, dolphins and more, are affected by our lack of care for plastic trash.

Plastic Pollution Only Getting Worse

A report released march 2018 found that over 70% of marine litter is non-degradable plastic. This figure is expected to triple within a decade. In fact, marine experts believe the total weight of plastic in our oceans could outweigh fish in the world’s oceans by 2050 (6). 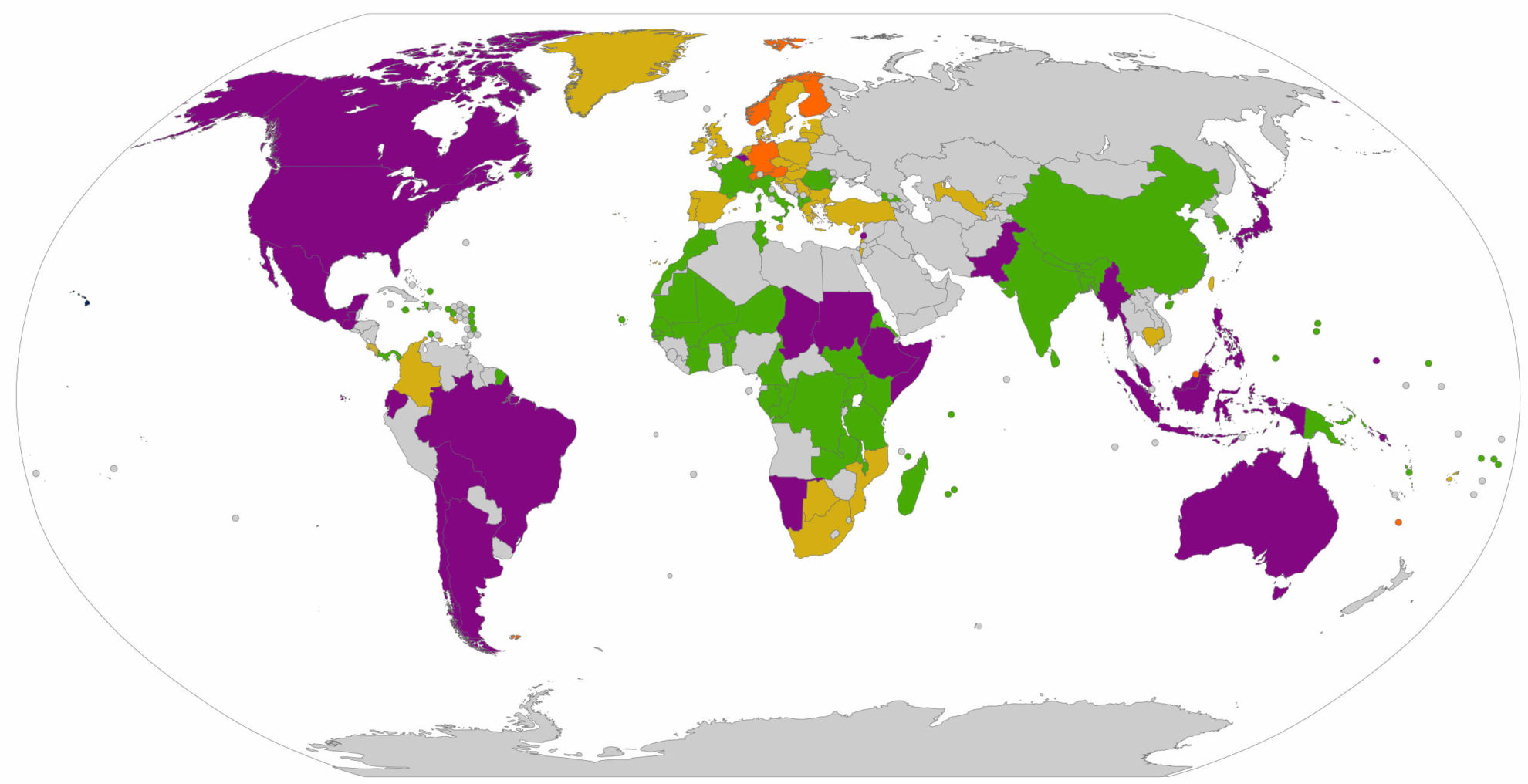 Why Aren’t We Using Plastic Alternatives?

If we’re posed with such a massive issue as non-biodegradable plastic, then why aren’t we sourcing out better plastic alternatives? Why is it taking so long for manufacturers to make the switch? Afterall, the earliest plastics were made from cellulose fibers obtained from organic, non-petroleum-based sources.

According to Seshata, a writer at Sensei Seeds:

“Hemp cellulose can be extracted and used to make cellophane, rayon, celluloid and a range of related plastics…Hemp is known to contain around 65-70% cellulose, and is considered a good source (wood contains around 40%, flax 65-75%, and cotton up to 90%) that has particular promise due to its relative sustainability and low environmental impact.”

Kevin Tubbs, founder of the Hemp Plastic Company, expects bioplastic hemp to make major market dominance in the coming years. “Outside of cash crops like hemp hearts and CBD oil, there’s a lot of waste in hemp processing. So I started experimenting. Take the waste products and you can do one of two things with them: You can either make hempcrete — a building material — or hemp plastic” (8).

Tubbs is confident that hemp bioplastic will overtake our need for petroleum-based plastics in the coming decades. And he’s not too far off that prediction.

According to Grand View Research, bioplastics are predicted to control 5 percent of the plastics market by 2020. And by 2030, this percentage is expected to rise by over 40%.

But why is hemp the best plant source to consider? Tubbs makes note that hemp “has very unusual characteristics for a plant. It’s ridiculously strong, almost as strong as spider silk.” It also grows well in most soils and doesn’t require much fertiziler or pesticides (if any at all). It grows fast, and absorbs carbon from the atmosphere. Ever seen a petroleum product do that? I don’t think so.

Hemp is our future, and hemp plastics will be the next big thing. It’s the only way we can go, seeing the state of our planet currently. But until hemp bioplastics actually become a thing, you can take some steps to reduce your consumption of plastic.

How To Reduce Your Consumption of Plastic

There are many ways you can reduce your consumption of plastic. Here are a few simple steps you can take today:
– Say no to straws – instead, purchase a reusable stainless steel or glass straw and carry it around with you.
– Instead of plastic wrap, opt for beeswax wrap alternatives like those at Sweet Bee Wraps.
– Invest in reusable produce bags like these ones.
– Buy boxes instead of plastic bottles (for instance, like laundry detergent, etc.).
– Buy from bulk bins (and bring your reusable glass jars!).
– Reuse glass containers.
– Stop buying bottled water, and invest in a counter-top water filtration device like the Berkey.
– Bring your own container if you’re going out to eat somewhere.
– Don’t buy convenience foods packaged in plastic.
– Clean with baking soda and vinegar instead of cleaners packaged in plastic.
– Don’t use plasticware.
– Use stainless steel sippy cups for kids.
– Don’t get to-go coffee or hot drinks. Your drink lid and cup will live on for over 100 years! The lids and lining are plastic. Bring your own or ask for a ceramic, reusable cup.
– Use cloth diapers instead of plastic ones.
– Use bar soap to wash your dishes. Dr. Bronner’s is perfect.
– Buy bar soap, not liquid body wash.
– Buy toilet paper that is wrapped in paper, not plastic.
– Don’t use plastic cutting boards. Use wood or glass.
– Give up gum, gum is made of a synthetic rubber, aka. plastic.
– Use matches instead of disposable plastic lighters.
– Invest in reusable bags to bring your groceries home.
– Use a razor with replaceable blades instead of a disposable razor.
– Use cloth based toys for your pets, like catnip mice and soft squishy balls.
– Use junk mail and other paper to stuff into big packages to ship instead of bubble wrap or air filled plastic.
– Make a compost heap to reduce your food waste and put it back into the earth.

Also, if you live next to a beach, go take a trip and pick up the trash! We need to help out our oceans a little bit better – and it all starts with a little bit of effort on our part.