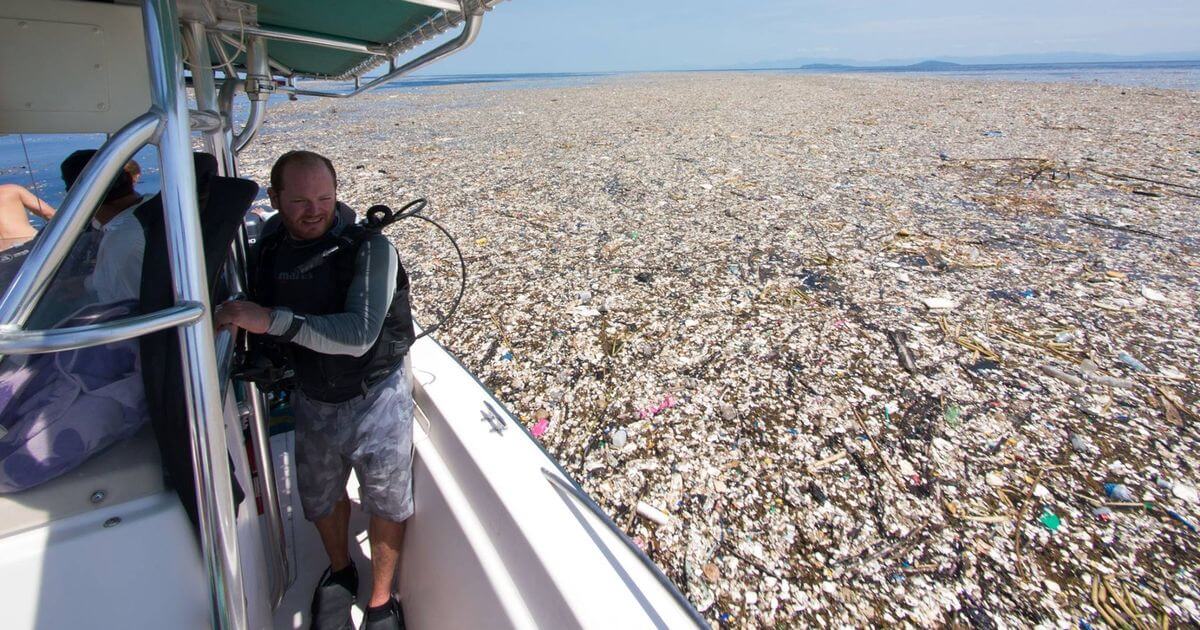 These sickening photos of a “sea of plastic” filled with everything from broken footballs and toothbrushes, to a television and shoes reveal the untold damage that humans are inflicting on the planet.

Recent estimates suggest that 91 precent of all plastic created for consumer use isn’t recycled (1). Even the scientists are shocked, “we all knew there was a rapid and extreme increase in plastic production from 1950 until now, but actually quantifying the cumulative number for all plastic ever made was quite shocking,” said Jenna Jambeck, an environmental engineer at the University of Georgia who specializes in studying plastic waste in the oceans.

Jenna Jambeck told the National Geographic, that this amount of pollution would “break any system” that was not prepared for this level of waste.

Plastic takes more than 400 years to degrade, so most of it still exists in one form or another.

Where Does All The Plastic End Up?

Considering it takes plastic over 400 years to degrade, where does it all end up? Shocking photographs taken by Caroline Power of an entire “sea of plastic” in the Caribbean, provide evidence that this plastic doesn’t just disappear, and is in fact, destroying the very oceans we depend on for a healthy ecosystem.

The amount of plastic pollution that is ending up in oceans is harming birds, marine animals, and fish. It is predicted that by mid-century (around year 2050), the oceans will contain more plastic waste than fish, ton for ton. 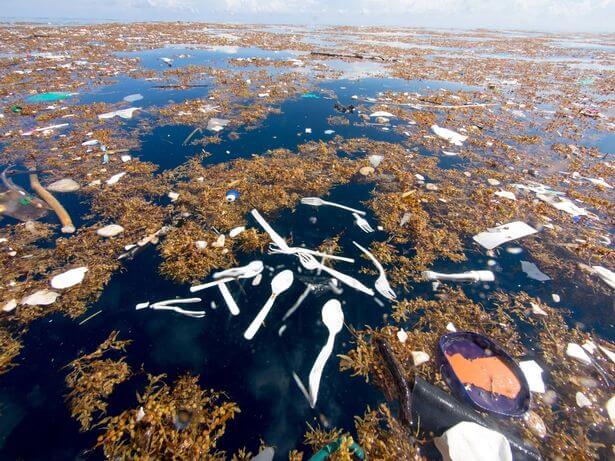 As a result of this, Power has urged everyone to take this problem personally. To look at their own responsibility in contributing to the problem.

“Think about your daily lives. How did you take your food to go last time you ate out? How was your last street food served? Chances are it was styrofoam, and served with a plastic fork and then put in a plastic bag. Do you still use plastic garbage bags? Plastic soda bottles? Ziplock bags? Plastic wrap on your food?

Do you buy toilet paper than comes wrapped in plastic instead of paper? Do you put your fruit and veggies in produce bags at the grocery?

I challenge every person and every business to keep your trash for one week. Separate your organic and recyclables and keep everything else for one week. You will be disgusted how many single use items you use.”

Sadly, Powers’ photos don’t even begin to touch the depth of the plastic pollution issue.

Plastic In Your Clothes

According to a new study out of Florida, funded by the National Oceanic and Atmospheric

Association (NOAA), even plastic we can’t see is clogging our waterways. This plastic, otherwise known as microfibres (microscopic plastic fibres), is causing a very real devastation to the oceans and environment.

Yoga pants, and other clothes made from common synthetic materials are mainly to blame (2). The two-year study found that more than 80 percent of the micro-plastics found in the ocean are actually micro-fibres from synthetic clothing.

Every time you wash your gym clothes, yoga pants, or any other garment made from synthetic material (such as rayon, polyester, acrylic, acetate, lycra and nylon), you’re shedding microscopic plastic fibres into natural waterways, which eventually make their way into the ocean.

Research has shown that microfibres are getting embedded into the tissues of marine life. This isn’t good for sea life, nor is it good for anyone consuming them. A recent study found that regular fish and shellfish eaters could be ingesting up to 11,000 microparticles of plastic a year (3).

An additional paper has shown that microfibres are responsible for 85 percent of shoreline pollution across the globe (4). Therefore, plastic isn’t just the stuff we can see in plain-view. It comes from the very clothing we wear. And things need to change if we want to continue living in harmony and respect with this beautiful planet.

How To Reduce or Eliminate Your Dependency on Plastic

There are lots of actions you can take today to reduce your dependency on plastic. Some of the suggestions below might help inspire you to take the step forward in helping the planet. You might think, “why would this help if I am just one person and no one else is doing it?” Try educating your friends and family so they do it, too. Sometimes change needs to start on a small level before the rest of the world catches on. Change starts with you.

– Look for clothing made with natural fabric, like bamboo, linen, silk, 100% cotton, and hemp
– If you have synthetic clothing, consider putting it into a filter bag before washing to reduce the flow of microfibres (Guppy Friend is a company that designs these awesome bags)
– Stop using plastic straws, and opt for stainless steel straws, or glass straws (bring them with you, so you don’t need to use a plastic straw when out and about)
– Invest in reusable produce bags – a single plastic bag can take over 1,000 years to degrade!
– Invest in reusable grocery bags (a lot of stores have these for purchase at checkout!)
– Give up gum, which is made of synthetic rubber (aka. plastic)
– Try utilizing “bring your own container” bulk food stores, where you can pre-weigh glass jars, and fill them up with whatever you need in bulk
– Reuse single-use containers
– Purchase glass storage containers for food
– Stop buying plastic water bottles, and instead, purchase a reusable water bottle, and buy an 18-litre gallon jug to re-fill at home
– Bring your own container for take-out or your restaurant doggy-bag, since many restaurants use styrofoam
– Avoid using plasticware at home, and request that restaurants do not pack them in your take-out box
– Use cloth diapers instead of plastic ones – approximately 7.6 billion pounds of disposable diapers are discarded in the US each year (5)
– Use a razor with replaceable blades instead of a disposable razor

Have any more ideas to reduce plastic pollution? Leave a comment below!