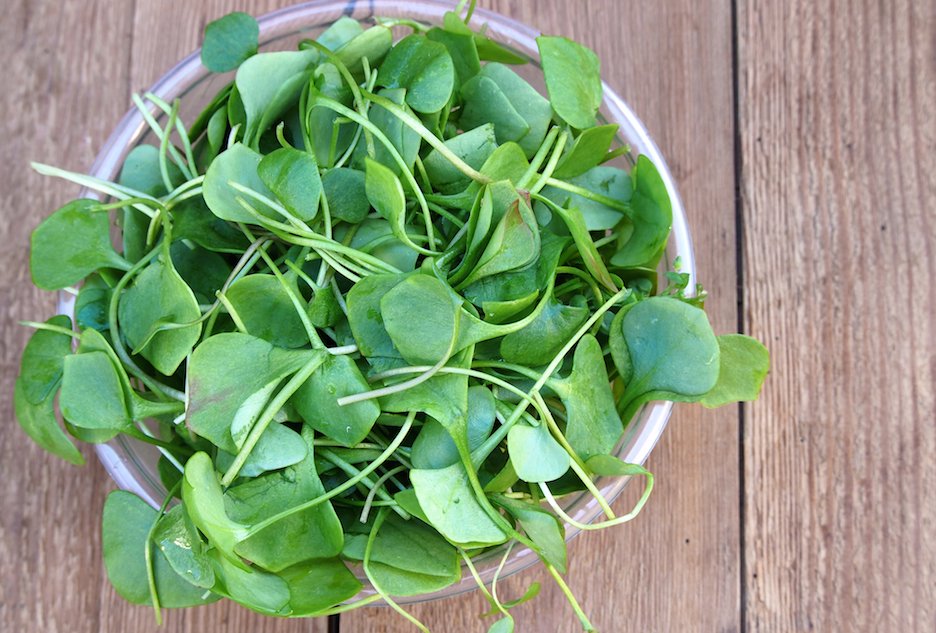 You might have heard that kale is now dubbed the almighty “superfood.” But that is in fact, not the truth. What leafy green could out-beat kale? Why, watercress of course!

Watercress is usually served as a garnish at restaurants, but what people don’t know is that it’s probably the most nutritious thing on their plate!

This beneficial green is (surprise!) a cruciferous leafy green (who would have thought?) – it originally grows wild along the banks of streams and slow moving rivers. Their leaves are small and round, with a bright green hue, and they are packed with numerous health benefits.

Watercress can be eaten in salads, juiced in juices, or blended in a smoothie. It doesn’t really matter how you eat it (just try not to cook it, as you get rid of the beneficial enzymes and minerals), but simply make sure you do eat it.

In fact, researchers analyzed the nutritional content of over 47 different fruit and vegetables, and ranked them accordingly. They gave each fruit and vegetable a nutrient density score out of 100, and watercress ranked top (100 points total!). Shortly after came Chinese cabbage, chard, beet greens and spinach (among others).

Watercress is rich in lutein and zeaxanthin, two very important eye nutrients that help lower the risk of macular degeneration and cataracts. It is also high in vitamin A, which is also crucial for helping prevent night blindness.

There are two phases in liver detoxification. Phase I and phase II. Phase I converts toxic chemicals into less harmful chemicals, where they are then shuttled into phase II to become neutralized (liver cells will add another substance (aka. like glucosinolates) to a toxic chemical or drug to render it less harmful). This makes the toxin or drug water-soluble so that it can be excreted from the body in fluid form (aka. urine or bile).

Watercress contains glucosinolates (mentioned above), which help boost and regulate the activity of detoxification enzymes in the liver. More glucosinolates means better toxic chemical or drug removal from the body.

B vitamins in watercress help relieve stress, anxiety and depression. They are essential to mental and emotional well-being, and cannot be stored in the body – meaning eating foods high in B vitamins is important if you want to stay sane. B vitamins are also critical for metabolizing homocysteine, which plays a major factor in depression. Oh, did I mention they help assist with the production and repair of DNA as well?

This amazing little plant is very high in naturally occurring iodine. It contains levels just below that found in sea vegetables, which is incredibly high for a land-based vegetable. Iodine is essential for your immune system, as well as your thyroid gland, and so it remains an important factor in regulating the metabolism.

It is also high in vitamin B1 and magnesium, which help the body release energy in food, and iron, which is used to hold onto oxygen ion your blood and transport it to your tissues. Iron is used to make energy and fuel enzymes, so if you aren’t getting enough iron, then you are depriving all of your body’s cells of oxygen!

Watercress is good for the immune system for a variety of reasons. It contains vitamin B6, which is needed to make defensive antibodies, as well as vitamins C and E, which help scavenge free radicals and reactive oxygen species and prevent disease and illness.

Watercress contains a rare element called germanium, too. Germanium is an oxygen catalyst and powerful antioxidant. It helps heal and build our DNA and has been known to aid in the prevention of cancer and AIDS.

When consumed, glucosinolates in watercress are converted to isothiocyanates, which then have the ability to inhibit tumourigenesis by modulating the metabolism of carcinogens (this effect only takes place with raw watercress – not cooked). It has also been found to help reduce lymphocyte DNA damage, which reduces risk of cancer.

Watercress is also high in a rare B vitamin type, vitamin B17. This vitamin helps regulate the immune system, boosts our hemoglobin levels and is incredibly anti-carcinogenic!

Because of it’s high iodine levels, watercress is incredibly important for the health of your brain and IQ. It has been found that as iodine levels decrease in the brain (likely due to fluoride content from drinking water, which displaces iodine – not good), your IQ levels decrease.

Watercress is incredibly high in vitamin K – just 1 cup of watercress provides you with over 106% of your recommended daily amount of vitamin K! Why is this important for the nervous system? Vitamin K reduces the amount of neuronal damage in the brain, and has therefore been used in treatment of patients with Alzheimer’s disease.

As we all know, iron is important for a healthy circulatory system and healthy body overall. Watercress is a good source of iron, as well as folic acid and vitamin B6, which are also needed to make healthy red blood cells.

Watercress also contains high concentrations of chlorophyll, which some researchers claim has the ability to release magnesium from its centre and absorb iron, thus becoming hemoglobin. Chlorophyll, therefore, literally becomes human blood, and helps increase oxygen levels throughout the body.

This herb also happens to be one of the best vegetable sources of vitamin K (as mentioned above). Vitamin K is important for the bones because it helps promote the strengthening and formation of bones (osteotrophic activity). Calcium, magnesium, manganese, vitamins A and C are also present in watercress, all of which help to build and maintain strong and healthy bones and teeth.