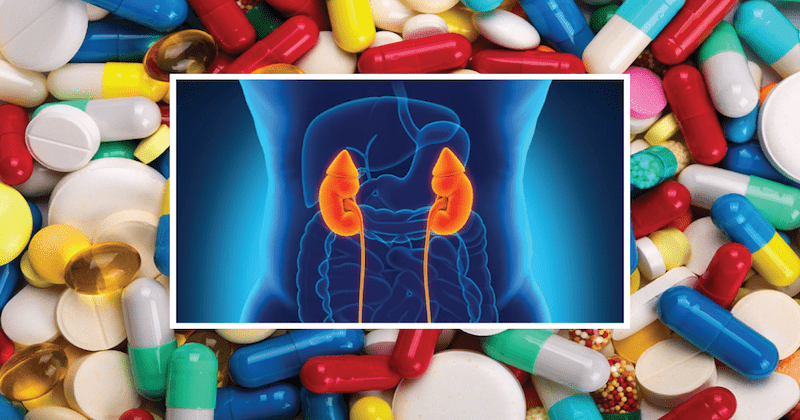 Our kidneys are one of the largest filtration systems of the body. They remove waste products and excess fluid from the body through urine that we eventually excrete. Unfortunately, a lot of these toxins are a byproduct of drugs that we ingest.

There are over 16 different drugs that cause kidney damage, ranging from severe, to even deadly conditions. A lot of the time, we can go about in our day to day lives without even noticing something is wrong.

According to Jeremy Allen, DO, a board-certified family practitioner with American Family Care, “Symptoms of kidney damage are typically very subtle, and by the time you notice them, there is usually already serious harm done…It is possible to lose as much as 90% of kidney function without having any overt symptoms.”

Once symptoms do start to arise, you may experience the following:
– Shortness of breath caused by fluid buildup in the lungs
– Chest pain, caused by inflammation of the pericardium (lining that covers your heart)
– Muscle weakness caused by electrolyte imbalance
– Permanent kidney damage, requiring permanent dialysis or kidney transplant
– Death

The liver is also largely affected by the ingestion of prescription drugs, seeing as how the liver’s main function is to detoxify chemicals and metabolize drugs.

Getting your blood sugar and blood pressure under control is the best method to prevent renal failure. Over two-thirds of renal failure are caused by hypertension and and diabetes.

Lowering your consumption of animal products (like fatty meats and dairy), while increasing your consumption of fresh fruit and vegetables is a great place to start. Lowering consumption of processed foods that are high in sodium and fat, as well as refined sugary treats like cakes, cookies and donuts is also important. Drinking plenty of water and natural diuretic foods like celery, watermelon, and cucumber can also flush the kidneys of any excess waste products.

Treat your body to a full kidney detox with this juice recipe.

Asking your doctor about alternatives to the drugs mentioned below is another great option.

Nephrotoxic means toxicity in the kidneys. It is a poisonous effect of both toxic chemical and medications, on renal function. Before taking any of the below listed drugs, understand that they can cause severe (and sometimes even deadly) kidney damage. These drugs can be deadly in small doses if you already have kidney problems, so if you are taking them, respect the recommended dose you have been prescribed.

Top 16 Drugs that Cause Kidney Damge

Including: acetaminophen and non-steroidal anti-inflammatory drugs (NSAIDs) like aspirin, ibuprofen, naproxen, and other prescription and non-prescription painkillers.

Including: acyclovir (Zovirax) for herpes, and indinavir, ritonavir and tenofovir for HIV.

Including: ramipril, lisinopril, captopril (Capoten), and angiotensin receptor blockers like candesartan and valsartan.

Including: infliximab (Remicade), hydroxychloroquine, and chloroquine, which are used to treat malaria and systemic lupus erythematosus, as well as rheumatoid arthritis.

Including: dyes used in MRIs and CT-scans.

Including: cimetidine and more.

Including: cocaine, amphetamines and heroin.