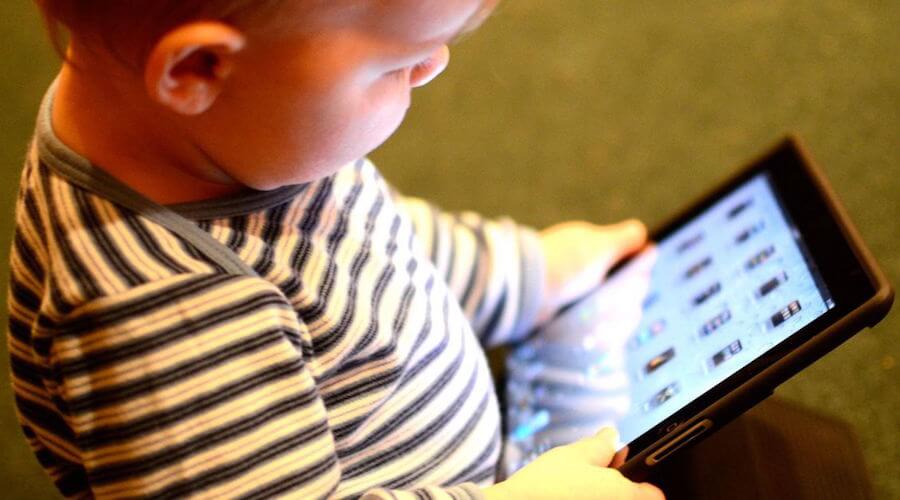 Go to any mall, coffee shop, or even playground, and you’ll notice children staring down at the glowing screens of tablets and smartphones.

The updated guidelines from the American Academy of Paediatrics (AAP) recommends no more than one hour of screen time a day for kids aged 2 to 5 years old. In addition to this, babies below 18 months should avoid it altogether (1).

While it is a convenient way for parents to temporarily distract their children or prevent a temper tantrum, studies also are showing that it is creating brand new mental health and behavioural problems in young kids.

SDD is a disorder that can potentially cause insomnia, backaches, weight gain or weight loss, eyesight problems, anxiety, dishonesty, feelings of guilt, loneliness and headaches. It can even lead to poor nutrition (2).

Dr. Sigman writes, “Associations are emerging between screen dependency disorders (SDD) such as Internet Addiction Disorder and specific neurogenetic polymorphisms, abnormal neural tissue and neural function.” He adds, “It is possible that intensive routine exposure to certain screen activities during critical stages of neural development may alter gene expression resulting in structural, synaptic and functional changes in the developing brain.”

Whereas adult brains are more developed, children’s brains are susceptible to significant changes in structure and connectivity. Subsequently, these changes stunt neural development and lead to a screen dependency disorder.

In his research, Sigman notes that “Addiction is a term increasingly used to describe the growing number of children engaging in a variety of different screen activities in a dependent, problematic manner.”

In an e-mail interview with Smart Parenting, Claudette Avelino-Tandoc, a Family Life and Child Development specialist and Early Childhood Education consultant, notes that children as young as 3 or 4 years old can have SDD. She also explains that children with SDD grab their device the moment they wake up and eat at the table with their eyes glued to the screen, playing games, watching shows or manipulating apps.

Based on Sigman’s research, those who are addicted to screens also exhibit dependent, problematic behaviour including:
– Withdrawal symptoms
– Preoccupation
– Increasing tolerance
– Failure to reduce or stop screen activities
– Loss of outside interests
– Continuation despite negative consequences
– Lying about extent of use
– Use to escape adverse moods

If your child exhibits the symptoms mentioned above, there also is a good chance that your child has SDD. If your child cannot be calmly taken away from screen time, and regular family routine or tasks are disrupted because of it, you know something is wrong.

A team of researchers at the University of Iowa have discovered that by age two, 90 percent of children had a moderate ability to use a tablet (3).

Dr. Fran Walfish, a Los Angeles-based child and family psychotherapist says, “We have a lot of 2-year-olds using tablets now, and I see 3- and 4-year-olds that are already addicted…It’s mind-blowing and a little scary (4).”

One 2015 study published in Behavioural Sciences (Basel) found that 12 percent of young American adolescent gamers to be “pathological video-gamers” (5). And while playing video games isn’t as dangerous as using chemical substances such as hard drugs and alcohol, researchers suggest that it could lead to addiction-like symptoms including those listed above.

According to Dr. George Lynn, 80 percent of his patients’ issues stem from too much gaming, watching too many online videos, or excessively using social media. As a result, Dr. Lynn is witnessing “a personality syndrome that comes from basically unbridled, uncontrolled use of recreational use of screen media during the day and at night (6).”

“Most doctors, family doctors, even psychiatric practitioners are not hip to the obvious fact that a kid might be only getting two to three hours of sleep at night if that.” Says Dr. Lynn. “And that causes personality problems.”

Useful Tips for Parents Whose Children Have Screen Dependency Disorder

Here are a few tips and tools from Dr. Lynn and the American Academy of Paediatrics for reducing the amount of tech tantrum flareups in your family:

For children younger than 18 months, avoid the use of screen media other than video-chatting. Parents who want to introduce their kids to digital media between the ages of 18 and 24 months should choose high-quality programming. They also should watch it with their children to help them understand what they are seeing.

For children aged 2 to 5 years, limit screen use to 1 hour per day of high-quality programs. Parents also should co-view media with children to help them understand what they are seeing and apply it to the world around them.

For children ages 6 and older, place consistent limits on the time spent using media, and the types of media. Also make sure it never takes place of adequate sleep, physical activity, and other behaviours essential to good health.

Kids learn important social cues from their parents. So if you’re stuck on your phone or computer all day, especially while eating dinner, playing in the park, watching TV and every moment in between, don’t expect your kid won’t want to do the same.

Setting ground rules and enforcing them early on will also help keep your kids from getting technology-addicted. Designate media-free times together, such as dinner or driving, as well as media-free locations at home, such as bedrooms.

4. Use Devices As Motivators – Not Bribes

“Electronics shouldn’t be used as bribery, but they can be effectively used as motivators.” Said Dr. Walfish. “Parents can say ‘show me you can get in the car seat and buckle your seat belt and I can let you play on the iPad today when we get home.’” That’s a big difference than offering access for not acting poorly. In addition, Walfish notes that iPads and other electronic devices should have a role roughly on par with ice cream.