Category: > Health > Root Canals Cause Breast Cancer: The Hidden Link No One Told You About
685 shares 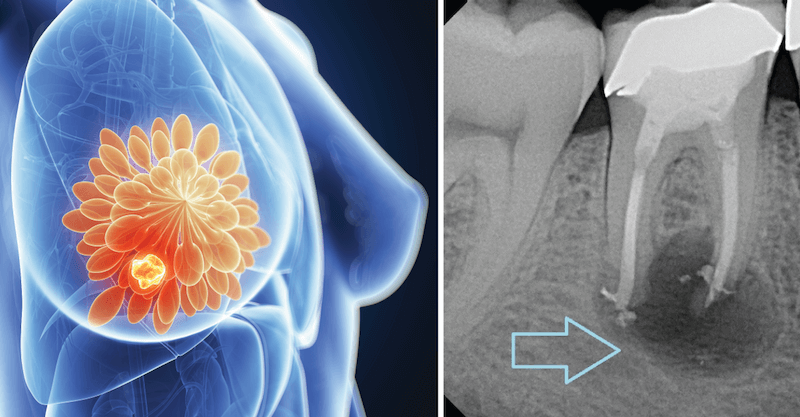 Root canal therapy has been performed by dentists for over 100 years. This practice involves drilling out the cancels of a dead tooth to remove bacteria and “save” the tooth.

However, an increasing amount of research is showing that getting a root canal can actually leave you with a life-threatening disease – cancer. This apparently caused by bacterial overload, which increases your risk of developing breast cancer.

This highly invasive procedure is performed 25 million times a year in the United States alone. It involves drilling into the decayed tooth to remove the infected pulp. The diseased and dead pulp is then removed using file-like instruments.

The canals are then filled with gutta percha (a plastic material, which is slightly toxic in itself), which, most of the time, research has shown, does not actually get into the tiny lateral canals of the tooth that branch off the main canal. This results in “leakage” of the highly toxic anaerobic bacteria the procedure was originally designed to remove.

Breast cancer and other diseases (even decades later) are said to be the result of these bacteria, research claims.

According to the Independent Cancer Research Foundation,

“Dr. Thomas Rau, who runs the Paracelsus Clinic (cancer clinic since 1958) in Switzerland recently checked the records of the last 150 breast cancer patients treated in his clinic. He found that 147 of them (98%) had one or more root canal teeth on the same meridian as the original breast cancer tumour. His clinic has a biological dentist section where all cancer patients, on reporting in, have their mouth cleaned up first — especially all root canal teeth removed. There are about 24 million root canals done in the U.S. alone every year. They were proven deadly disease agents in 1925 in a study by Dr. Weston Price and 60 prominent researchers. That study has been suppressed ever since by the ADA and the American Association of Endodontists (AAE).”

Dr. Kulacz, author of The Toxic Tooth: How a Root Canal Could Be Making You Sick, has performed biopsies on every root canal tooth he has ever extracted. He notes that, “almost all of them have remnants of necrotic debris still in [those] canals, meaning that they were not thoroughly cleaned. Microbiological cultures of the surrounding bone showed infection almost 100 percent of the time.” (1)

These doctors aren’t the only ones, either. Dr. Robert Jones, a researcher of the relationship between root canals and breast cancer, found there to be a very high correlation between the two. In a five-year study of 300 breast cancer cases, he found that 93% of the women with breast cancer had root canals, 7% had other oral pathology, and tumours (in the majority of cases), occurred on the same side of the body as the root canal(s) (2).

A study published in the American Academy of Periodontology also found that in 50% of the subjects studied, the root canaled teeth (as well as the patient’s blood samples) both contained anaerobic bacteria (with genetic tracing back to the bacterium at the site of infection and in the blood – which concluded the bacteria in the blood had in fact been caused by those bacteria still present after root canal surgery) (3).

Teeth And Their Connection To Body Health

Your teeth are incredibly important to the health of your whole body. They’ve been referred to by some researchers as an “energy highway” that runs through your entire body.

Chinese medicine believes that Qi (chi) energy flows through this highway, and has access to different body parts (4). When a tooth is diseased or dying, it can affect your organs in negative ways. Instead of getting your tooth drilled out and filled with toxic chemicals, getting it pulled will ensure that the rest of your body remains healthy.

The constant influx of harmful bacteria from the diseased tooth is also another reason why you should just lose the tooth altogether. Individuals with weak immune systems can run into troubles with the bacteria that lingers in a dead tooth, whether it has undergone a root canal or not. It can lead to sepsis, or even death in severely immune compromised individuals (5).

According to Dr. Veronique Desaulniers, the author and founder of Breast Cancer Conquerer, “…constant infection caused by a root canal in [the 4th and 5th teeth in the upper and lower jaw] can lead to complications, energy (or Chi) imbalances and blockages in energy flow in the breast meridian.” This is because these teeth are connected to the breast meridian, and so it would make sense that the breasts are directly affected. This imbalance, she states, can even be visible on thermography scans.

The Alternatives To Root Canals

Preventing the decay of your teeth and gums is crucial if you want to lower your risk for chronic disease and cancer.

If you currently need a root canal, then the damage has already gone too far, and you should just get the tooth pulled, and then get it replaced. That is the safest and healthiest method on how to deal with your dead tooth.

However, sometimes, root canals are recommended for the wrong reasons – such as when the gums have receded and the tooth is painful because of exposed dentin, or when the bite is off and the problem tooth is sore and causing pain. These can likely be reversed with the recommendations below for good oral health care.

Learning how to prevent decay and the spread of tooth decay will allow you to never have to deal with a root canal. If you’re concerned about your tooth, visiting a holistic or biological dentist can help. Search for accredited members of the International Academy of Oral Medicine and Toxicology (IAOMT) or the International Academy of Biological Dentistry and Medicine (IABDM).