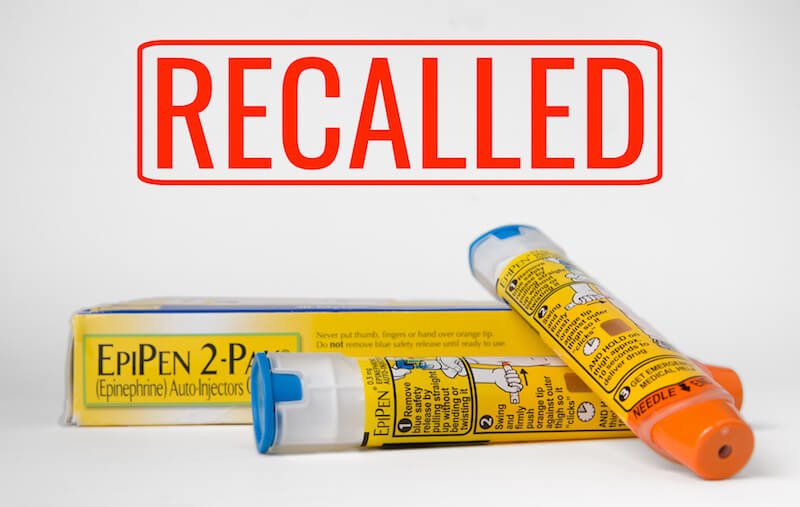 The U.S. Food and Drug Administration (FDA), is alerting consumers that Meridian Medical Technology is voluntarily recalling 13 lots of Mylan’s EpiPen and EpiPen Jr. Auto-Injector products. This is due to a defect that can cause the device to fail to activate (which can be deadly in case of an anaphylactic reaction).

If you think you may be affected by this recall, please follow the steps below:

1. Check the lot number on your carton or device to see if your EpiPen ® Auto-Injector is affected by the recall.

2. If your EpiPen ® Auto-Injector has been recalled, call Stericycle (1-877-650-3494) to obtain a voucher code for your free replacement product. Stericycle will also provide you with a pre-paid return package to ship the recalled EpiPen back to Stericycle.

3. Visit your pharmacy with your voucher information to redeem your free replacement.

4. Send your recalled product to Stericycle. Do not return any devices affected by the recall until you have your replacement in hand.

Mylan announced on March 31, 2017, that Meridian Medical Technologies, a Pfizer company and Mylan’s manufacturing partner for EpiPen ® Auto-Injector, has expanded a voluntary recall of select EpiPen and EpiPen Jr ®  Auto-Injectors to now include additional lots distributed in the U.S. and other markets in consultation with the FDA.

The recall has been conducted as a result of two previously disclosed reports outside of the U.S., where the device could not be activated. Both reports are related to the single lot that was previously recalled by Meridian. Although the incidence is extremely rare, the recall was expanded by Meridian to include additional lots as a precautionary measure out of an abundance of caution.

The recalled lots identified by the FDA are the 0.3 mg and the 0.15 mg strengths that were distributed between December 17, 2015, and July 1, 2016, not including the authorized generic version. The expanded recall is being initiated in the U.S., and will extend to additional markets in Europe, Asia, North and South America.

EpiPens are spring-loaded syringes filled with epinephrine, a life-saving medication used when someone shows the signs of a life-threatening allergic reaction either to insect bites, food, drugs, or other substances. Epinephrine acts to improve breathing, stimulate the heart, raise blood pressure, reverse hives, and reduce swelling in the face, lips and throat.

The EpiPen is designed to be administered to a person’s thigh to allow the spring-loaded syringe to administer the correct dosage of epinephrine needed to survive an allergic reaction (it provides the person enough time needed to get to a hospital). The defective part may require a person to use increased force to activate the needle, or it may prevent the EpiPen from working at all, according to Mylan.

More details can be found here.

Recalled lots in the U.S. are as follows: