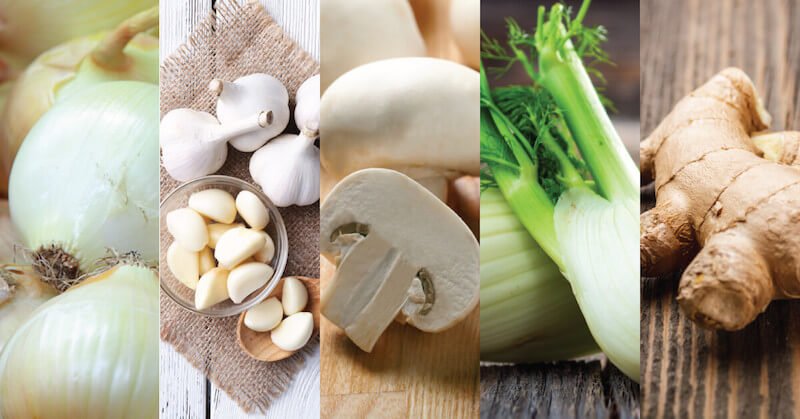 What do cauliflower, bananas, pears, potatoes and mushrooms all have in common? They’re white (or at least the inside parts that we consume are). Although white hued fruit and vegetables aren’t normally given the attention they should in the health food world, this colour provides more than you’d think.

White foods are incredibly supportive of the immune system. They contain polysaccharides called beta-glucans that increase the production of white blood cells (involved in the immune response), and increase cellular mobilization (allow immune cells to respond faster to harmful invaders). They also contain a potent antioxidant called EGCG (epigallocatechin gallate), that has been found to aid in the treatment of many diseases such as cancer.

Fruit and vegetables whose edible flesh is white have also been found to protect against stroke. Researchers at the Wageningen University in the Netherlands found that every 25-gram increase in the amount of white fruit and vegetables consumed each day helped reduce risk of stroke by 9%! This is amazing, considering one medium-sized apple is 120 grams (and if you’re like me, you can eat a lot of apples!).

Add them to smoothies, salads, and juices. For example, you could make a banana, apple, pear smoothie with some coconut water as the liquid base. Or, you could make a juice with apples, pears, ginger, fennel and celery (for some added saltiness). The sky is the limit!

Here are 15 white fruit and vegetables you should be including in your diet! 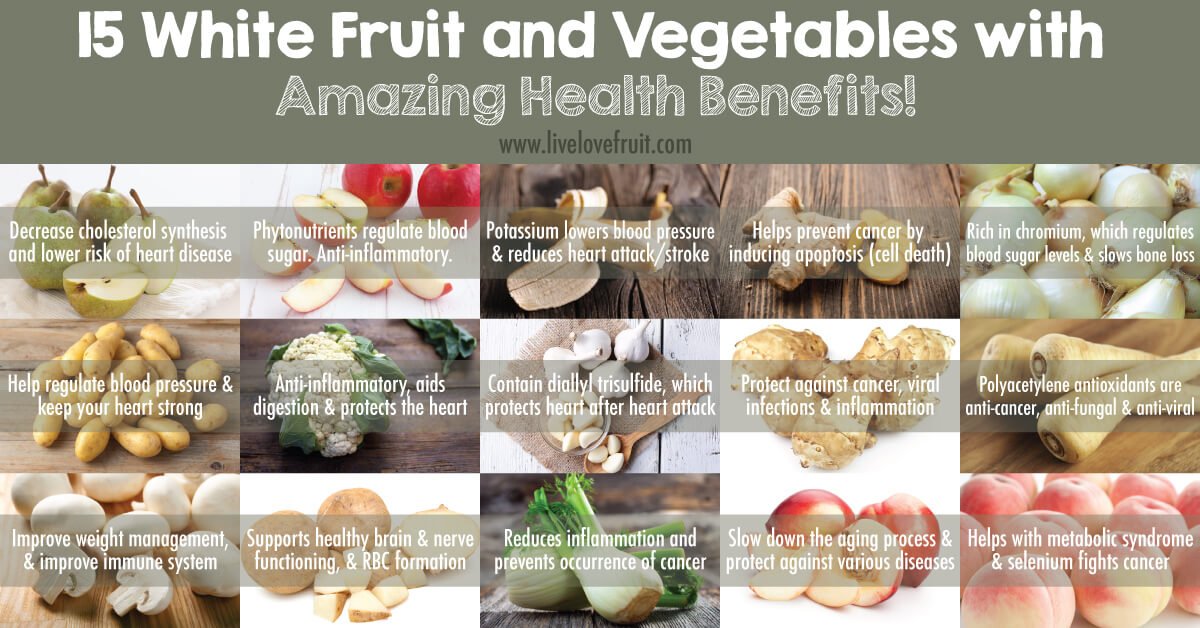 Pears are a great source of fibre, copper and vitamin C. Pear flavonols, flavan-3-ols and anthocyanins have all been shown to help improve insulin sensitivity in the case of those suffer from type II diabetes. Research has also shown that pear fibres bind together with bile acids in the intestine, thereby decreasing synthesis of cholesterol and therefore lowering the risk of heart disease.

Phytonutrients in apples help regulate blood sugar, while the fibre has been shown to help lower cholesterol. Apples also contain quercetin, which acts like an anti-histamine and anti-inflammatory agent.

Renowned for their high potassium levels, bananas help lower blood pressure and thereby reduce the risk of heart attack and stroke. They also contain plenty of vitamin B6, which acts as an anti-inflammatory, as well as tryptophan, which can regulate your moods, help you relax, and feel happier.

This spicy root makes a great addition to any juice or smoothie. It is also a great remedy to help prevent cancer as it has been studied for its effectiveness in treating and preventing ovarian cancer as well as colon cancer. The compound [6]-gingerol causes cell cycle arrest in the G1 phase of cancer cell cycle development and also induces apoptosis in cancerous cells.

Onions are rich in chromium, which helps regulate blood sugar levels, and slows bone loss. The phytochemicals in onions also improve vitamin C function and absorbability in the body, which enhances your immunity and prevents against disease and illness.

Potatoes are loaded with vitamin B6, potassium and Iron. They help regulate your blood pressure level and keep your heart strong. Make sure you boil or steam them, though, because oven-roasted potatoes release a natural cancer-causing compound called acrylamide.

This heart-healthy flowering vegetable offers anti-inflammatory, digestive, and brain-boosting benefits. It contains several compounds, including sulfoaphane, insoles and isothiocyanates, that have been shown to inhibit the growth and spread of cancer cells.

Garlic helps lower blood pressure and high cholesterol levels, both of which result in reduced risk of stroke. It also contains a compound called Diallyl trisulfide that helps protect the heart during cardiac surgery and after a heart attack. In addition, garlic can prevent cardiomyopathy, a form of heart disease that is the leading cause of death in people with diabetes.

This amazingly tasty vegetable (also known as a sunchoke) is nutty, flavourful and starch-rich. It contains a large amount of iron, as well as antioxidants like vitamins C, A and E. These vitamins, along with the abundant flavonoid carotenes help scavenge harmful free radicals, and protect against cancer, inflammation and viral infections like the cough and flu.

Parsnips, similar to carrots, contain many poly-acetylene antioxidants like falcarinol, falcarindiol, panaxydiol, and methyl-falcarindiol. Studies from the University of Newcastle found that these compounds are anti-inflammatory, anti-fungal, and anti-cancer. They protect from colon cancer and acute lymphoblastic leukaemia (ALL).

Mushrooms are one of the most powerful natural medicines on the planet. Mushrooms help improve weight management, increase vitamin D levels and dramatically improve immune system function. They contain beta-glucans (as with most white-fleshed fruit and vegetables), long-chain polysaccharides that improve immune system response.

Jicama is another white-hued vegetable that is full of potassium and iron, both of which help improve the cardiovascular system. It also contains vitamin B6, which helps support healthy brain and nerve functioning, formation of red blood cells, and synthesizing of antibodies that fight foreign bacteria and viruses in our body.

Fennel contains a host of unique phytonutrients that provide it with strong antioxidant activity. One of fennels volatile oils called anethole has been repeatedly found to reduce inflammation and prevent the occurrence of cancer by shutting down TNF-mediated signalling and thus prevents activation of a gene-altering and inflammation-triggering molecule called NF-kappaB. I love juicing fennel with apples, ginger, celery, lemon and cilantro. Such an amazing combination!

Because nectarines and peaches are so similar in nutrient content, I decided to place them together. They’re both a great source of vitamins, minerals, and health promoting antioxidants. They’re particularly rich in vitamins A, C and E, all of which help protect against reactive oxygen species and help slow the aging process and various disease processes. Nectarine and peach smoothies are the best thing in the world, too – just sayin’.