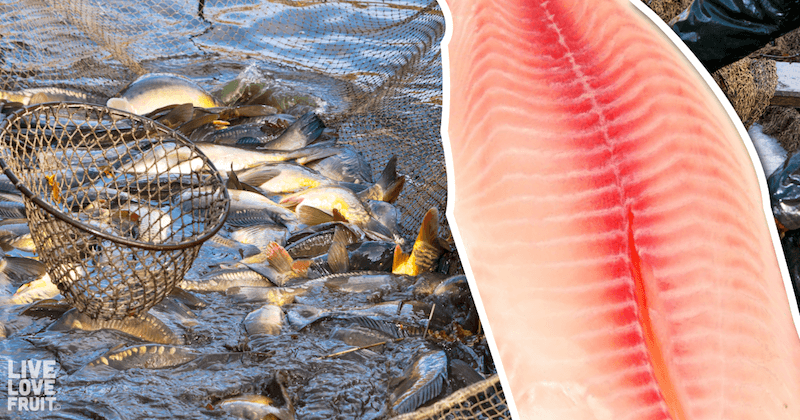 Fish farms provide over half of the world’s seafood – including the US. They have become one of the fastest growing forms of food production in the world, with tilapia ranking close to number one.

As an inexpensive, mildly-flavored fish, tilapia has become increasingly popular. It is also a lean source of protein, with just 3 grams of fat per serving. However, recent scientific studies have pointed to certain issues surrounding tilapia.

So why is tilapia so unhealthy? Being a low-fat, high-protein food, rich in niacin, vitamin B12, selenium, phosphorous and potassium, what could be so bad?

Why is Tilapia so Unhealthy?

There are a few reasons why someone might avoid eating tilapia. Depending on where it’s sourced, fish can either be detrimental to your health, or a relatively healthy option for those who choose to consume animal-based protein.

There is a huge difference between fish that are caught in the wild, versus farm-raised fish. The unfortunate thing about all this is that the fish you buy in the supermarket is usually farm-raised. This includes fish like salmon, tilapia, carp, swai, catfish, sea bass, and cod.

Wild fish have access to their natural food sources like wild plant life, bugs, and other small fish. Farm-raised fish only have access to what they are being fed. In some cases, that is the feces from farm animals like chickens, or pig and duck waste. I’ll talk more about this in another point below.

Farm-bred fish have also been found to have high concentrations of antibiotics and pesticides. You definitely don’t come across these problems in wild fish (unfortunately, wild populations are being tainted). Crowded conditions in fish farms make them more susceptible to disease, so to keep them alive, farm owners give antibiotics to fish to keep disease at bay.

Pesticides used on farm-bred fish like Chinese tilapia are so deadly that they’ve been known to kill populations of wild salmon that are exposed to them. Of course, these pesticides not only kill off wild salmon populations, but they infect the bodies of other marine life. The dwindling of salmon populations have left orca pods hungry and dying, as was the case with one orca mother who carried her dead calf for over 16 days.

Tilapia, in particular, is an ideal fish for farming, because it doesn’t mind growing in crowded spaces, it grows quickly, and is quite adaptable. Because of this, some farming practices have gone a little over-board when it comes to growing fish for profit.

According to environmentalists, intensive and unregulated tilapia farming is damaging delicate ecosystems in poor countries with practices “generally prohibited” in the United States (1). When a large number of fish are bred in small cages in natural lakes, fish waste pollutes the water. Such was the case at Lake Apoyo in Nicaragua, where pollution from fish farms killed off the aquatic plants, leaving the lake a wasteland.

Dr. Jeffery McCrary, an American fish biologist who works in Nicaragua, told the New York Times, “We wouldn’t allow tilapia to be farmed in the United States the way they are farmed [in Nicaragua], so why are we willing to eat them?” He said. “We are exporting the environmental damage caused by our appetites.”

Waste from fish farms and uneaten feed litter the sea floor beneath these farms, which generates bacteria that consume oxygen required by bottom-dwelling sea creatures. The waste generated by fish farms promotes algal growth, harming the water’s oxygen content, and posing risks to coral reefs and other aquatic life (2).

Why is tilapia so unhealthy? Another reason is because almost all tilapia sold in America is pumped full of hormones. Tilapia and other farmed fish are fed methyltestosterone during the early, sexless stage of life so that they’ll grow bigger and quicker. Growing reproductive organs takes up a lot of energy. By by-passing this stage of life, they don’t expend energy developing reproductive organs, and they require less food.

By consuming fish that have been pumped with methyltestosterone, we’re also getting a portion of that drug when we eat said fish. Methyltestosterone has been associated with liver damage (3), and has even been taken off the market in Germany due to its high potential for liver toxicity.

As mentioned above, tilapia and other farm-raised fish are commonly fed a diet of feces from farm animals. You read that right. Research from the Johns Hopkins Center for a Livable Future revealed how some disease-ridden fish farms in Asia are fed a cheaper alternative of farm feces. In defense, the FDA vehemently denied that this was the case. But if less than 3 percent of imported seafood shipments from Asia are actually tested for contamination (4), then how would they actually know? Experts worry about the large amounts of antibiotics given to fish who consume feces, not only for human health, but for the fact that it may give rise to antibiotic-resistant strains of salmonella.

Recent studies have shown that eating tilapia may actually worsen inflammation in the body. This is because the omega-3 to omega-6 fatty acid ratio is totally off balance. There are much more omega-6s than omega-3s in tilapia. The Wake Forest University study found that the inflammatory potential of tilapia is worse than that of a hamburger or bacon, therefore making it a fish you should definitely not eat (5).

Heavy metals are another concern when it comes to eating fish. One study found that one-fourth of the commercially fished tilapia in Lake Managua, Nicaragua, exceeded maximum recommended mercury levels for consumption among pregnant women and other at-risk groups (6). As a result, the study recommended there by closer heavy metal monitoring of imported freshwater fish.

Farmed fish also escape and cross-breed with wild populations. Research has shown that these hybrid-born fish are less healthy, and die sooner than their wild counterparts. With enough cross-breeding, entire gene pools could be erased from the wild populations.

In addition to this, you might not really know what you’re getting in the grocery store when you’re purchasing wild fish. Maybe the ‘wild’ North Atlantic salmon that you purchase may actually be a farmed escapee. There is really no way of knowing.

Perhaps this answered your question of “why is tilapia so unhealthy?”. There are many reasons, but only you can make the best judgement. Remember – if you eat fish, eat wild varieties only. If you’re a big salmon fan, always go for Pacific or Alaskan salmon – these fish are almost always wild caught. If it’s Atlantic salmon, it is almost always farm-raised. As for tilapia? Avoid it altogether (unless it’s wild, that is – but finding wild tilapia will be quite difficult).