Category: > Environment > What Crops Are Sprayed with Glyphosate? Over 70 of Them To Be Exact
165.7K shares 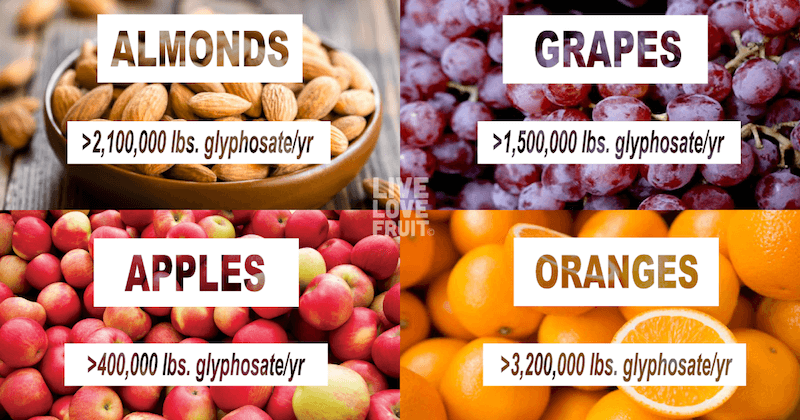 Ever since Dewayne Johnson won a landmark lawsuit against agricultural giant, Monsanto (now Bayer), people have been scrambling to find ways of avoiding the popular weedkiller, Roundup.

While this is a little easier said than done, finding out what crops are sprayed with glyphosate can be useful when deciding what foods should be bought organic. And while organic produce is still minimally tainted, it is still better than purchasing the conventional counterparts.

Glyphosate, the main ingredient in Monsanto’s Roundup herbicide, is one of the world’s most popular weed killer. It isn’t only found in Roundup, though. It is registered to be used in hundreds of other products, including household products as well as non-Roundup herbicides.

Glyphosate was listed by the World Health Organization as “probably carcinogenic to humans” in 2015 (1). When the statement was released, Monsanto backfired and discredited cancer scientists by relying on partners like CropLife International, International Food Information Council, Sense about Science, and others to protect the reputation of Roundup (2).

Other studies have found links between Roundup and various health problems and diseases like Parkinson’s, infertility and cancers (3). The peer-reviewed study, authored by Stephanie Seneff of the Massachusetts Institute of Technology and Anthony Samsel, a retired science consultant, found that glyphosate residues disrupt normal body functions and induce disease.

“Negative impact on the body is insidious and manifests slowly over time as inflammation damages cellular systems throughout the body,” the study said (4). Seneff further stated that they “have hit upon something very important that needs to be taken seriously and further investigated.”

While glyphosate doesn’t kill you on the spot, it’s the accumulative effects that matter. It isn’t until glyphosate starts building up in the body over months and years, when symptoms start to arise.

Over time, glyphosate slowly damages our delicate gut flora, leading to chronic diseases rooted in gut dysfunction. When the delicate lining of our gut gets damaged, it makes it more difficult to absorb vitamins and minerals from our food (5).

Another study published in JAMA tracked people over the age of 50 in Southern California from 1993-1996 to 2014-2016. Urine samples were collected over the time period to measure levels of glyphosate and its metabolite aminomethylphosphonic acid (AMPA). They found that the percentage of people who tested positive for glyphosate increased over 500% in that time period. Glyphosate usage also increased by 1208% during this time period, making it very unlikely that this was just a coincidence (6).

GMO Crops Not The Only Crops Sprayed with Glyphosate

While many people assume that Roundup is only sprayed on Roundup-ready crops (crops that are designed to withstand glyphosate), this isn’t particularly true. In fact, many farmers use glyphosate on crops like wheat, oats, edible beans and other crops right before harvest.

But wait, isn’t Roundup and other glyphosate-containing products just for GMO crops? Not necessarily. Roundup is sprayed on GMO crops like corn and soy, because they are genetically engineered to withstand the harshness of the chemical. So wouldn’t glyphosate technically kill a non-GMO crop, as it is not designed to withstand the chemical? You bet.

Spraying glyphosate at the end of the season to kill a crop and/or greenery around it allows for earlier harvest (in the case of wheat), and increases profit.

According to glyphosate.eu, “Pre-harvest treatment of crops with glyphosate helps farmers to harvest their crops more efficiently and at less cost (7).”

A bit of a shock, yeah? So while you may think glyphosate is only used for GMO crops and killing weeds, it is actually used quite extensively throughout the entire North American food supply.

The worst part? Spraying glyphosate right before harvest means the food directly absorbs the glyphosate residues. That means you can’t wash it off, and instead gets ingested by the consumer as a whole food or an ingredient that is added to a processed food product.

What Crops Are Sprayed with Glyphosate?

According to the Cornucopia Institute, “Ubiquitous in food production, glyphosate is used not just with row crops like corn, soybeans and wheat, but also a range of fruits, nuts and veggies. Even spinach growers use glyphosate (8).”

Unfortunately, over 70 crops are sprayed with glyphosate, whether to clear the land before growing, or to desiccate prior to harvest. This includes popular foods like almonds, oranges, grapes, apples, watermelons, figs, and more.

The complete list of crops is shown below, taken from an EPA memo from October 2015. Even more shocking, is that when you compare this list, to the previous data from 2011, it shows that glyphosate use for popular food crops has continued to grow at an alarming rate.

If over 70 popular crops are sprayed with glyphosate, how the heck do you avoid it? The first assumption would be to eat organic, and while this greatly helps reduce glyphosate residues being consumed, it doesn’t mean your produce is totally glyphosate-free.

While most people tend to think that pesticides and herbicides only stay in one place, and can be washed off produce, this is far from the truth. These chemical particles drift through the air, and can settle miles away. They settle into the soil, and are make themselves into the groundwater and run-off, which end up in foods we like to call organic.

It is a little disconcerting knowing this, but it doesn’t mean you have to starve. The point I am trying to make is that glyphosate isn’t disappearing anytime soon. It is present in most of our bodies, and while eating organic drastically reduces our exposure, it doesn’t mean we will ever be 100% glyphosate-free.

This doesn’t mean organic produce is bad. It is so much better than conventional produce. The levels of glyphosate found in organic crops is minimal – so if one of your favorite crops listed above is sprayed with high levels of glyphosate, opt for the organic version. You’ll reduce your exposure and

What To Do About Glyphosate in The Body

If you’re concerned about glyphosate residues in the body, you don’t have to be stuck worrying about when these chemicals will trigger certain diseases to form in the body. There are many methods of helping the body detox glyphosate.

The plant extracts listed above (like dandelion, alder buckthorn, radish, etc.), help restore cytochrome P450 (CYP) enzyme activity often disrupted by glyphosate, as well as protecting our liver cells from glyphosate intoxication. CYP enzymes are used by the body to help detox chemical compounds in the body. If they are destroyed by glyphosate presence in the body, the ability of our body to effectively detox certain chemical compounds is greatly reduced. This means higher toxin load, and thus, more disease in the body.

You can also do other things to help detox the body of harmful chemicals like glyphosate. Here are just a few suggestions:
– Use an infrared sauna to sweat out toxins
– Eat nutrient-dense, whole, raw, organic foods
– Consume probiotic-rich foods like sauerkraut and kombucha to nourish our gut lining from glyphosate damage
– Avoid animal products like meat and/or dairy who were fed a diet of crops sprayed heavily with glyphosate (like corn)
– Avoid using pesticides and herbicides in your lawn and/or garden