A second round of tests from the Environmental Working Group (EWG) show that glyphosate continues to contaminate popular breakfast foods. Glyphosate, the active ingredient in Monsanto’s Roundup weed killer, was found in over 19 oat-based cereals and foods.

The second round of tests were released when Quaker and General Mills told the public there is no reason for concern regarding glyphosate in food. According to these two companies, their products meet the legal standards. Unfortunately, there should be no “legal standard” for glyphosate in food, given recent results demonstrating its role in cancer. The scientists over at EWG also agree.

In the latest testing rounds conducted by EWG, all but two of the 28 products tested contained glyphosate levels above 160 parts per billion (ppb), the health benchmark set by EWG.

These findings come two months after EWG’s first testing rounds that measured glyphosate in popular children’s breakfast products. Even then, General Mills and the Quaker Oats Company fiercely defended their products by stating that glyphosate levels found in its foods were within regulatory limits set by the Environmental Protection Agency (EPA).

And while this may be true, just because there is a set legal limit, doesn’t necessarily mean it is safe. As stated in the most recent EWG report on glyphosate in food, “Federal government standards for pesticides in food are often outdated, not based on the best and most current science. The EPA’s standards for pesticides and other chemicals are also heavily influenced by lobbying from [the] industry (1).”

In 2008, the EPA set a legal limit for glyphosate on oats at 30 parts per million. But the EWG points out that these standards were set by the EPA before findings about the carcinogenic nature of glyphosate were released (like those from the World Health Organization and the Global Glyphosate Study). The EPA’s standards were also set well before a jury awarded millions of dollars to a man diagnosed with a deadly cancer after he sued Monsanto.

As of July 2017, California’s Envrionmental Protection Agency’s Office of Environmental Health Hazard Assessment (OEHHA) also listed glyphosate as a chemical known to cause cancer under Proposition 65, which requires warning labels on consumer products that may contain potential cancer-causing ingredients.

According to EWG, “OEHHA has proposed a so-called No Significant Risk Level for glyphosate of 1.1 milligrams per day for an average adult of about 154 pounds. That level of exposure is more than 60 times lower than the safety level set by the Environmental Protection Agency (2).”

Being exposed to glyphosate at OEHHA’s risk level would put an adult at risk of cancer of 1 in 100,000. However, EWG points out that an additional tenfold margin of safety might be necessary to protect those most vulnerable – children and fetuses. With this taken into consideration, almost all foods tested by EWG could be damaging to human health.

“With this additional children’s health safety factor, EWG calculated that a 1-in-a-million cancer risk would be posed by ingestion of 0.01 milligrams of glyphosate per day. To reach this maximum dose, one would only have to eat a single 60-gram serving of food with a glyphosate level of 160 parts per billion, or ppb.

The majority of samples of conventional oat products from EWG’s study exceeded 160ppb, meaning that a single serving of those products would exceed EWG’s health benchmark…

The EPA has calculated that 1- to 2-year-old children are likely to have the highest [glyphosate] exposure, at a level twice greater than California’s No Significant Risk Level and 230 times EWG’s health benchmark (3).”

In their most recent testings, EWG commissioned Anresco Laboratories to test a range of oat-based products. These included cereals, snack bars, granola and instant oats. Of the 28 products tested, those that came out with the highest levels of glyphosate included (4):

The tested products contained glyphosate at levels well above EWG’s safety standard of 160 ppb (aside from the Quaker Instant Oatmeal Cinnamon & Spice which came in close at 128 ppb). Quaker Oatmeal Squares breakfast cereal contained levels of glyphosate 18 times higher than the benchmark set by EWG.

EWG suggests that the EPA start limiting glyphosate residues allowed on oats and prohibiting the use of glyphosate as a desiccant (pre-harvest drying agent) if we want to protect ourselves, and our children.

For a complete list of glyphosate in food, check out my article here (it includes the first round of testing done by EWG, plus a plethora of other food items tested by different organizations).

If you’re worried about glyphosate concentrations in your body, read my article on how to detox glyphosate from the body. 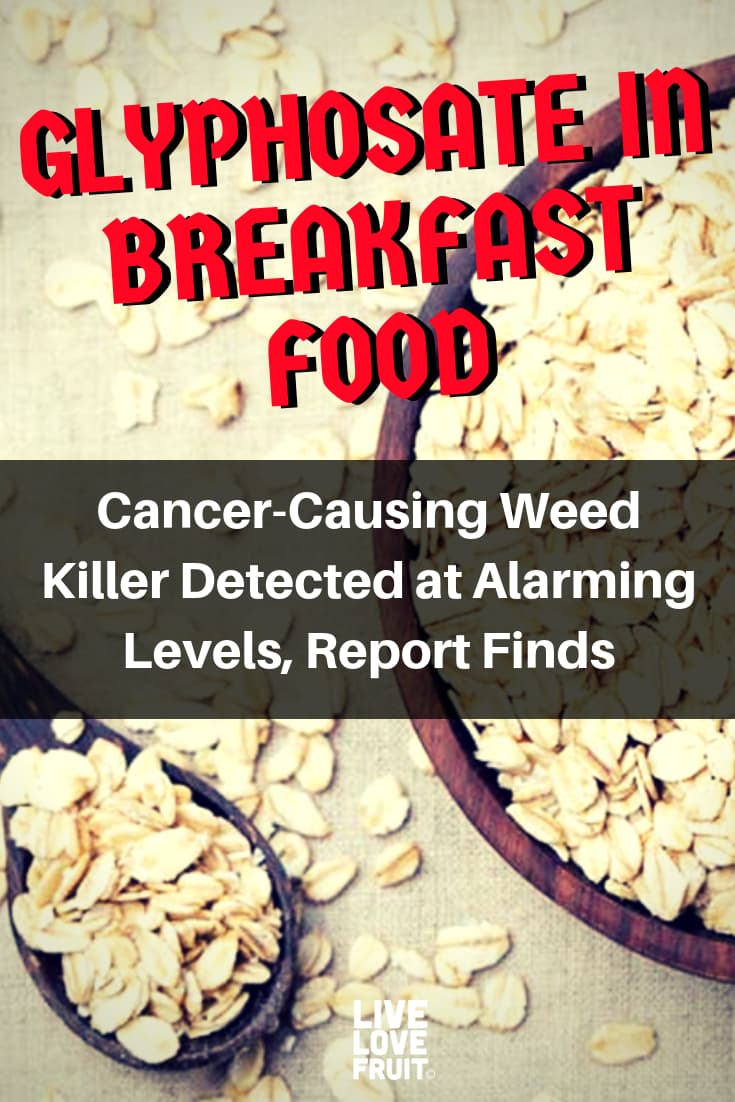