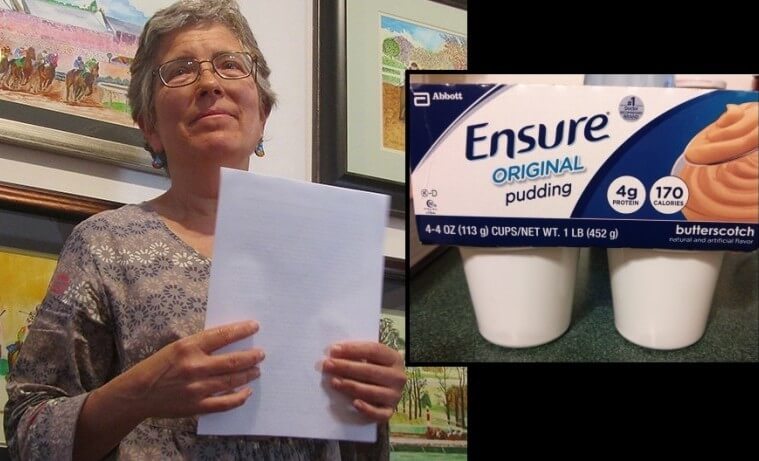 If hospitals are supposed to be where people heal, why are they serving them food that does the opposite?

Carrol Krause was a reporter for the Herald-Times in Bloomington, Indiana. She was diagnosed with ovarian cancer in 2014, and during her last days she put together a blog to document the ups and downs of life as a terminally ill cancer patient.

Her blog post, ‘Food? Or Vile Glop?’ indicates that the food provided to her was disgusting, nutritionally-deficient and not even worthy for a “dying animal”.

“Hospice had the very best of intentions, and I am grateful for their concern. Although I do not wish to malign them in any way, the stuff they sent over was not real FOOD. In fact, I’m outraged at the idea that they feed this stuff to dying people.” Carol wrote.

She then went on to describe the ingredients of the popular hospital meal replacement, Ensure, which she was fed at the hospital:

“The first three ingredients in the so-called “pudding” are water, sugar, and corn maltodextrin (a heavily processed starch with a high glycemic index). Yum, yum. Moving on to the ersatz “shake,” the first three ingredients are water, corn maltodextrin (again) and sugar. And as for the alleged nutritional apple-flavored “juice” (which bears the warning “Contains no apple juice”), the main ingredients are water, sugar, and corn syrup solids. For the sake of comparison, a Milky Way candy bar contains 37 grams of total carbohydrate. The fake “juice” contains 43 grams of total carb, which makes it significantly sweeter than the candy bar. But wait: the “shake” contains a whopping 52 grams. The “pudding” wins the carb battle with a moderate 30 grams, which is approximately the carb equivalent of three-and-a-half Oreo cookies.”

Ensure is labelled as a “healthy drink for adults”, but it is far from that. This fake food tonic is mainly sugar and water, infused with a variety of different chemicals like preservatives, additives, artificial flavours and colour. There is also quite a bit of salt in there too.

It is produced by a major supporter of the pro-GMO Grocery Manufacturers Association, namely, Abbott Nutrition. Abbott Nutrition has spent nearly 1 million dollars to fight GMO labelling in the U.S.

But let’s keep feeding this food to our sickly loved ones (insert sarcasm here).

One Ensure product, named Ensure Clear Therapeutic Nutrition, was highlighted in Carrol’s blog. It portrays an orange drink with an apple next to it, yet on the side of the packaging above ingredients, the company is quick to note that it “contains no apple juice” (or any juice for that matter). It’s two main ingredients are water and sugar. The rest can be seen below: 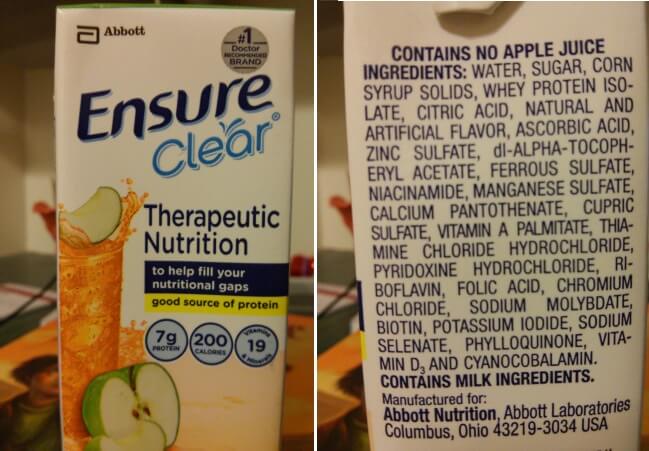 From these ingredients, you should note the majority and their impact on our health:

– Corn syrup solids: undoubtedly made from GMO corn, which has been linked to diabetes and cancer
– Whey protein isolate: poor quality protein, can cause digestive issues
– Cupric sulfate: toxic pesticide that can cause effects like eczema and itching, nausea, diarrhea, vomiting and headache
– Chromium chloride: toxic chemical that affects the reproductive system and stomach
– Sodium selenite: byproduct of copper metal refining. Classified as dangerous by the Environmental Protection Agency
– Natural and artificial flavours: can include a variety of different chemicals, contributing to more ill-health
– Synthetic vitamins: synthetic vitamins are made using chemicals, and the body does not absorb these vitamins in the same way it would with genuine vitamins

What Carrol Had To Say

After writing about the ingredients in Ensure Clear, Carrol left one last statement:

“Soup is good food. Pudding can be good food too, if it has real milk and egg in it…But this swill (I don’t know what other word to call it) from Hospice is completely vile. It’s not real food, only a collection of starches, sugars, artificial flavors and nutritional powders all mixed into water. Maybe someone who spends their life eating at fast-food joints wouldn’t object to eating Ensure products, but I do, because I know the difference between real food and fake food.”

She then finishes with:

“I wouldn’t feed this stuff to a dying animal, let alone a dying human being. If you agree, let the hospital management know. Or snipe at them via social media until they begin to pay attention. I think it’s time for a food fight!”

Although it will be long before food in hospitals changes, it is important to make your needs clear. If enough people said no to the food that hospitals fed them, and demanded better options, then things might start changing.

As Carrol said, let hospital management know. Make your voice heard. Share this article on social media to expose the truth, until they start paying attention and changing things.