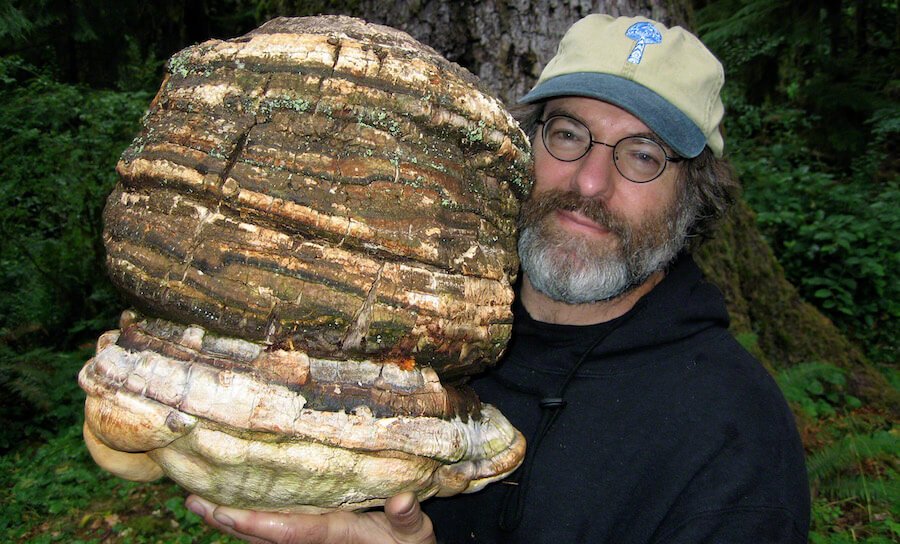 While pesticides might increase field yields, they come at a big cost to mother nature. If we only have one planet to survive and thrive on, then shouldn’t we focus on banning the use of harmful chemical pesticides that pollute our air, water and soil?

That’s what one man has in mind, and his name is Paul Stamets.

Paul Stamets, 40-year mycologist (fungi biologist) and author of the book Mycelium Running: How Mushrooms Can Help Save the World, sought an out-of-the-box solution from the natural world when carpenter ants started attacking his house.

Paul wasn’t okay with the idea of using conventional pesticides in and around his house, so instead he decided to utilize mushrooms to turn the ants into zombies.

Paul Stamets and His Amazing Fungi

During his years of research, he has discovered and co-authored several new species of mushrooms, and pioneered different techniques in the field of mushroom cultivation (1). He has won awards like the National Geographic’s Adventure Magazine’s Green-Novator, the “Bioneers Award” from The Collective Heritage Institute, and “Found of a New Northwest Award” from the Pacific Rim Association of Resource Conservation and Development Councils. He was also named one of Utne Reader’s “50 Visionaries Who Are Changing Your World.”

After utilizing a fungus species to rid his house of carpenter ants, Stamets decided to come up with a natural, and far more superior alternative to conventional pest control. In 2011, Paul was granted two breakthrough patents that could revamp the way we control insects (2).

The patented pesticide that Paul discovered – named SMART pesticides – utilizes fungi to kill insects. This natural pest control is made using an entomopathogenic fungi (like Cordyceps), which naturally produces spores which infect, but also repel insects. Paul discovered that if the mycelium is cultured to delay sporulation, insects would engage the fungal mycelium, spreading it, offering a ‘trojan horse’ solution that could replace many of the toxic insecticides currently used. So essentially, the pesticide attacks the insects who eat it, turning them into fungi from the inside out.

The best part about Paul’s SMART pesticide is that it is non-GMO and 100% safe for both people and the environment. Paul creates the fungi by using standard tissue culture and natural selection so that there are no transgenic methods being used. He also ensures that the strain he creates through this process is trained to harm only targeted insects. Paul states, “we do not wage war against insects. We just want to protect our homes, crops or bees without causing collateral harm to the ecosystem (3).”

Stamets SMART pesticide patent is a near permanent, safe solution for over 200,000 species of insects.

You would think that by 2011, we would be hearing non-stop about this brilliant idea of using fungi to kill insects – but that isn’t the case. And there’s a reason.

A Patent That Could Destroy Monsanto

In 2001, when Stamets filed for a patent, he was all but ignored. With big corporations out there like Monsanto, the last thing they want is a product that will replace the poison they currently market.

In all truth, this patent has potential to revolutionize the way humans grow crops – if it can be allowed to reach mass exposure. If adopted, the mushroom pesticides would be a breath of fresh air in our increasingly toxic environment.

While pesticides are useful for large-scale food production, they also have harmful effects for both humans, and the environment they live in. Many of the chemicals used in commercial pesticides, like ammonia, arsenic, benzene, chlorine, dioxins, heavy metals, formaldehyde and glyphosate are dangerous to people even in small doses. They even show up in human bodies after consumption of conventionally-grown food.

According to Dr. Seneff, MIT computer scientist, glyphosate contributes to a variety of different conditions. She states that glyphosate is possibly “the most important factor in the development of multiple chronic diseases and conditions that have become prevalent in Westernized societies (4).”

A lot of the data on pesticides actually comes from the farmworkers themselves, who work with these chemicals regularly. Studies have linked long-term pesticide exposure in these groups to increased risk of Alzheimer’s and Parkinson’s disease; prostate, ovarian and other cancers; depression; and respiratory problems (5).

In a 2010 report on environmental cancer risks, the President’s Cancer Panel wrote: “The entire U.S. population is exposed on a daily basis to numerous agricultural chemicals. …Many of these chemicals have known or suspected carcinogenic or endocrine-disrupting properties.”

So if there are healthy alternatives that can be used, why aren’t we using them?! It seems like such a simple switch, and yet companies like Monsanto have little care in the world if they continue poisoning the planet.

Monsanto generates about $16 billions dollars per year (as reported in 2014), so you can be certain that they do not want anything interrupting that flow of revenue. An income that large gives them limitless resources and abilities to suppress information like SMART Pesticides, so that their reputation isn’t hurt.

What needs to happen is a shift in consciousness around pesticide and GMO use, to help eliminate “Big Agricultures’” influence and knock them off their fictitious monetary pedestals they think they’re sitting on.

By becoming educated on the benefits of growing sustainable, organic, and bio-dynamic food, sharing articles like this, and boycotting GMO and herbicide-sprayed crops (by not purchasing conventional food items), the corporate demon may soon get our message.