Category: > Remedies > Here’s Everything You Need To Know This Summer About Removing Ticks And Preventing Their Bites
798 shares 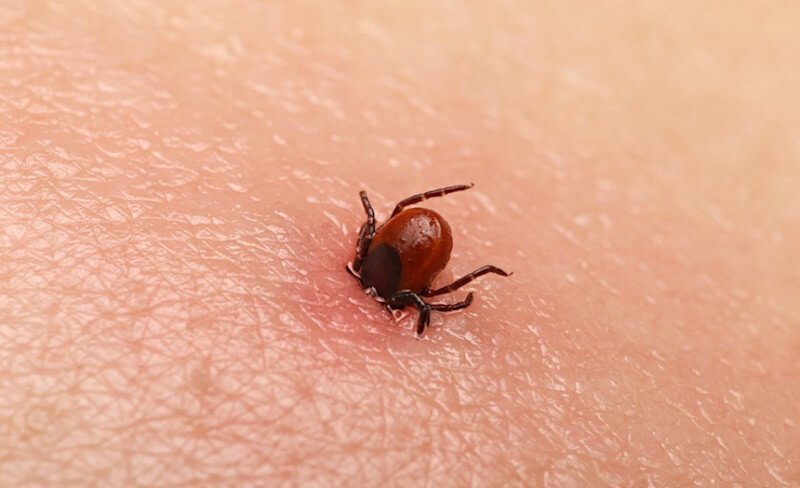 Tick season is upon us, so although you might want to venture in the great outdoors, there are some things you need to know first.

If you haven’t already heard about Lyme disease, it is an inflammatory infection that speaks to humans through tick bites. It is caused by borrelia bacteria, which commonly infects animals like birds, mice, rodents and deer.

Not only do you need to worry about Lyme disease being transferred by ticks, but you should also beware of the Powassan virus, which affects the nervous system and can be transmitted from a tick in as little as 15 minutes (1).

Ticks: The Dangers You Need To Know

As described above, ticks can transmit some pretty deadly diseases. Fortunately, most of these can be treated if caught in the early stages.

The first thing you should know, especially if you’re a parent, is that ticks are very fond of children, mainly because they spend plenty of time outside in their clothes, which give ticks easy access to their skin.

For one Oregon couple, a tick bite left their 3-year old paralyzed.

Amanda Lewis wrote, “Evelyn started acting a little weird last night around bedtime. She didn’t want to stand up after her bath to get into her pyjamas. I helped her and got her in bed. She was a little fussy last night and I ended up sleeping in bed with her all night.”

After Evelyn clearly displayed signs of paralysis the morning after, her parents brought her to the ER, worried that she might be suffering from a brain tumour. Luckily, Evelyn’s doctor recognized the condition after experiencing several cases in other patients with the same symptoms. He suggested that she was likely suffering the ill-effects of a tick bite.

Not surprisingly, the doctor found a tick on her scalp, removed it, and monitored her as she recovered. The next day Evelyn was feeling much better, and was able to safely return home.

This isn’t the only account of the ill-effects that tick bites have in children and adults alike. Two of my own family members have suffered from Lyme disease, my mother, and then my sister. For my mom, she had flu-like symptoms after being bit by a tick, upon which she started to display bulls-eye rashes all over her body. I quickly did my research and discovered that she was likely suffering from Lyme disease, even though a walk-in doctor diagnosed her with a rash and gave her steroid cream. It was only once she got to emergency and got seen by a specialist that she was finally diagnosed with Lyme disease (and was later photographed by infectious diseases here in Winnipeg).

Just this one instance of doctors

Unfortunately, the area I live in is Lyme disease central (Southern Canada at the Manitoba/Ontario border), and the place where I was brought up (Lake of the Woods, Clearwater Bay), has been extensively studied as being one of the hottest spots of Lyme disease transference. Specifically, adult ticks on Corkscrew Island (a place not too far from where I lived) have a 73% infection rate for Lyme disease (2,3).

The type of tick that bites you is also dependent on whether they are carrying the Lyme disease bacterium with them. It is only deer ticks that might carry the disease, and these guys are smaller than most ticks. They are coloured red and brown with a darker shield on their back. Wood ticks are dark brown in colour with silver-grey or whitish colouring on their back. See the image below to decipher between the two. 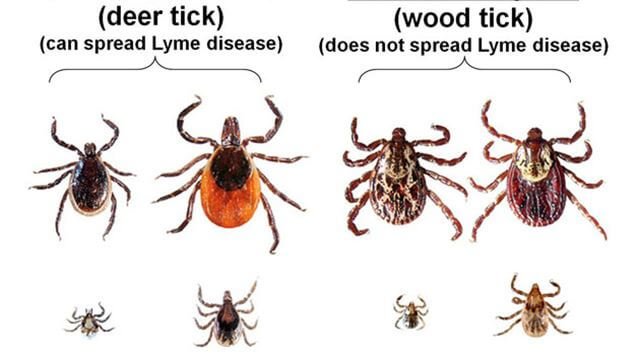 Although deer ticks carry Lyme disease and wood ticks do not, both ticks have the ability to transmit other diseases, and both species are known to cause tick paralysis (4).

Tick paralysis can affect adults, children and pets, and begins with paralysis of the lower extremities. It will gradually progress upwards to the chest, face, and arms. If the tick is not removed, the respiratory muscles will fail and the individual will likely die of respiratory failure (5). Seek medical attention immediately if you or a loved one experiences any of these symptoms.

The Correct Way To Remove Ticks

If you’ve seen the videos circulating around with applying peppermint oil to the tick once it has already latched into skin, don’t do it. This method stresses out the tick, and they are much more likely to salivate into your skin, spreading disease.

In fact, anything that aggravates or suffocates the tick will cause them to regurgitate all the contents of their stomach so that you have a higher chance of becoming infected. Anything from alcohol, aftershave, oils/butter, paraffin, petroleum jelly to nail polish should be avoided (6).

Incorrectly removing a tick can also cause the tick’s mouth parts to be left behind in the skin, which can result in a localized infection. In fact, ticks don’t even have heads. They simply inject a “capitulum,” which is directly attached to their body – only tiny cutting limbs and this capitulum (the barbed feeding tube) enter the skin, and are too small to see with the naked eye. The tick will create a pit, however, where its body will sit, and will appear as though the tick has gone deep inside the skin.

To remove a tick, use fine-tip tweezers (precision tweezers), and avoid using blunt-nosed tweezers (like the ones used to pluck eyebrows) or surgical forceps – the last two are too broad and are more likely to squeeze the body of the tick (and therefore cause regurgitation).

According to Borreliosis and Associated Diseases Awareness UK, here are the steps you should follow when removing a tick:

1) Grasp the tick as close to the skin of the host (the animal or person it’s attached to) as possible and pull upwards with steady, even pressure.

Do not twist or jerk the tick as this may leave its mouth parts embedded, or cause it to regurgitate disease-causing fluids. If any mouth parts do break off, they may be removed with a sterilised needle or tweezer points.

2) Do not squeeze or crush the body of the tick, because its fluids (saliva and gut contents) may contain disease-causing organisms and leak into the host’s blood steam or in to the skin.

3) Do not handle the tick with bare hands, because certain disease-causing organisms may enter through breaks in the skin, or through mucous membranes (if you touch eyes, nostrils or mouth).

4) After removing the tick, disinfect the bite site with an antiseptic wipe or wound wash and wash your hands with soap and water.

5) You may want to save the tick for identification in case the person or animal the tick was attached to becomes ill within several weeks. Write the date of the bite in pencil on a piece of paper and put it with the tick in a sealed plastic bag and store it in a freezer. Your doctor / vet can then be certain that a tick bite has occurred and use this information to assist in making an accurate diagnosis.

Once you have removed the tick, make sure you keep an eye on the bite area. If you see an expanding “bulls-eye” rash, you likely have been infected with Lyme disease, but can be treated if caught in the early stages. If there is no rash, but the bite area fails to heal, becomes inflamed, or if the person or animal becomes ill, make sure you seek medical attention.

If you’re using the O’Tom Tick Twister removal tool, follow the instructions on the video below.

Preventing a tick bite is probably easier than having to deal with it once it has already attached itself to the skin.

One of the best ways to keep ticks away is by covering your skin with clothes so that the tick cannot bite the skin. I use this method if I am out in the bush picking blueberries, I make sure my whole body is sealed tight with clothing (no matter how warm I get) by tucking in socks, shirts and gloves to keep them from crawling under my clothes.

You can also spray your clothes with a peppermint oil bug spray, or by diluting peppermint oil in a carrier oil like grapeseed or jojoba oil and applying directly to your skin.

To make the tick and bug spray, here is what you’ll need:

Pour everything into a spray bottle and shake until well combined. Store in a dark, cool place and shake before each use. Spray onto your clothes or skin every two hours as needed. It will help repel not only ticks, but black flies and mosquitoes.