Category: > Health > Spray This Non-Toxic Oil Mixture To Get Rid of Black Mold For Good!
432shares 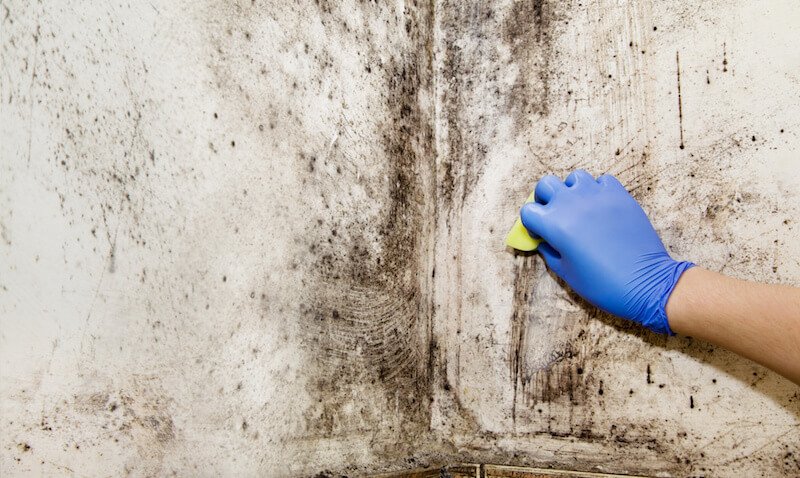 Mold and mildew are everywhere, whether you can see it or not. They are natural byproducts of a humid environment – but that doesn’t mean you need to share your house with them.

These microscopic fungi flourish not only in the bathroom, but also in your food, dust, air ducts, washing machines and in wall corners that face the outdoors.

While most people turn to harsh chemicals (like bleach or borax), there are natural ways to kill black mold at home that won’t hurt your family, pets, or the environment.

Why You Should Get Rid of Mold

Mold toxicity isn’t something you should play with. The repercussions are quite dangerous, and can have major negative effects on your health. The most obvious reactions to mold are sneezing, watery eyes, sore throat, cough, and the onset of asthmatic symptoms.

Indoor water-damaged environments harbour many different mold and bacterial species that produce mycotoxins, which don’t like to leave the body after they’ve taken residency.

“…storage of mycotoxins occurs in variety of tissues [sic]…lungs, spleen and lymph nodes…Prior exposure to toxic told and mycotoxins may represent an important feature of chronically ill patients such as CFS [chronic fatigue syndrome] as well as those with CRS [chronic rhinosinusitis]. An internal reservoir of toxin producing mold (e.g. sinuses) that persists in biofilms could produce and release mycotoxins (2).”

Sick building syndrome is often the culprit, and the study cited above found that people with chronic conditions stemming from mold exposure didn’t get better after being removed from their environments – even years later.

According to mycologist (biologist specializing in fungi), Berlin D. Nelson, “Macrocyclic trichothecenes are highly toxic compounds with a potent ability to inhibit protein synthesis…In addition, the fungus produces nine phenylspirodrimanes (spirolactones and spirolactams) and cyclosporin, which are potent immunosuppressive agents…these compounds could be pathogenicity factors involved in pulmonary hemorrhage in infants…Penicillium and Stachybotrys species may be associated with sick building syndrome…occupants developed fatigue, headaches, chest tightness, mucous membrane irritation and pulmonary disease…researchers concluded that a mycotoxin-induced effect was a likely cause of disease (3).”

Mold is even more toxic when consumed, sometimes leading to life-threatening illness such as cancer and heart disease (4).

Fortunately, three simple ingredients are enough to rid your household of any lingering black mold.

Tea tree oil is known for its antiseptic properties, and is a very effective fungicide. It can be used to kill foot and fingernail fungus, candida, and dandruff. It is also beneficial when it comes to killing household mold (5).

Grapefruit seed extract (GSE) is another great remedy against mold and other fungi. It has been found to be effective against more than 800 bacterial and viral strains, 100 strains of fungus, and a large number of single and multi-celled parasites (6).

Pour the water, essential oils and grapefruit seed extract into a spray bottle, affix sprayer and shake to mix. While the ingredients are mixed, spray to cover the area of mold you are wanting to eliminate. Do NOT rinse off! The mold should die within 24 hours, and if there is residual staining, wash with a natural abrasive like baking soda or borax.

Use this spray regularly on areas where mold likes to develop to keep it under control. Spray the area 1-2 times per week, and let dry.