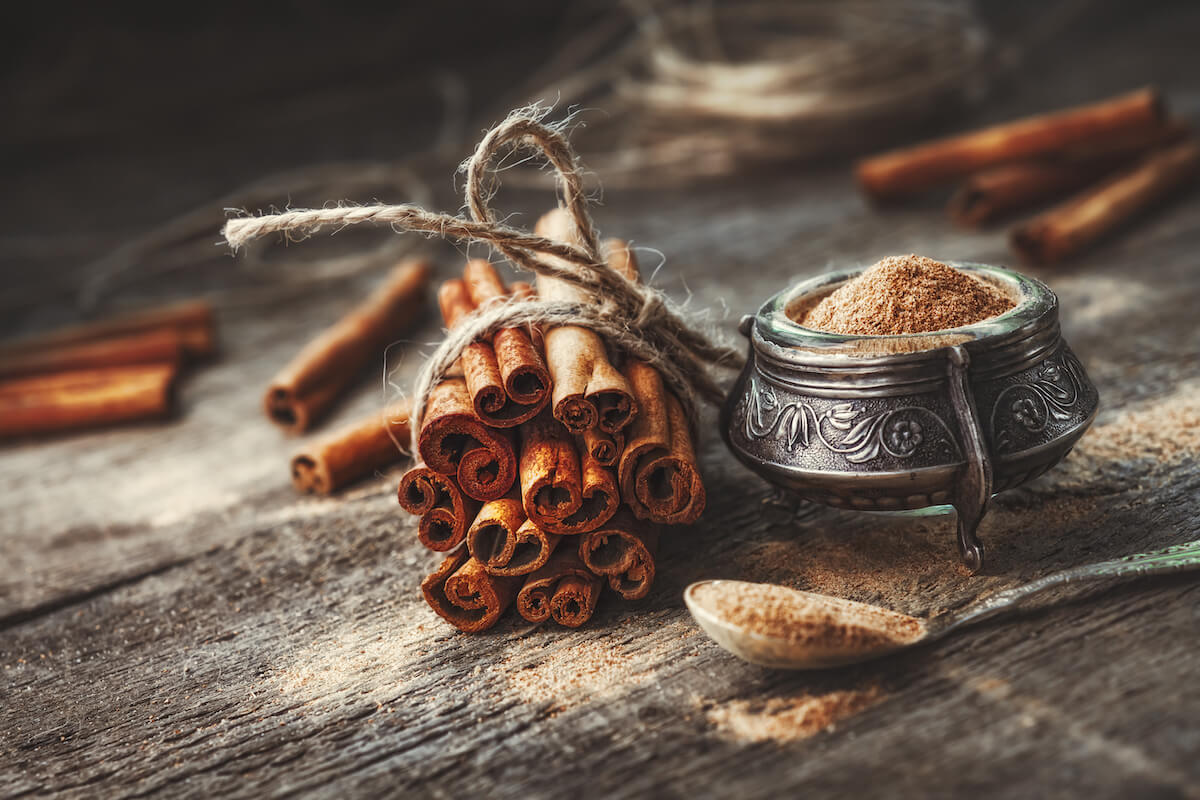 Who knew that such a common spice could do so much? There are so many potential health benefits of cinnamon, those which range from diabetes improvement, acne reduction, allergy relief and candida destruction among many more.

Cinnamon has been used both as a spice and medicine for centuries. There are two main types of cinnamon – Ceylon (“true” cinnamon) and Cassia (the more common variety seen today). The intense smell and flavour of cinnamon is the compound cinnameldehyde, the oily part of cinnamon, and the component that is most responsible for cinnamon’s powerful health effects.

It has been found that the intake of 1, 3, or 6 grams of cinnamon per day reduces serum glucose, triglyceride, LDL cholesterol and total cholesterol in people with type 2 diabetes. Not only that, but an active component in cinnamon called methylhydroxychalcone polymer (MHCP) has insulin-like activity and helps increase the uptake of glucose (blood sugar) by cells.

Cinnamon is a natural acne remedy. It is highly anti-bacterial and works as an anti-inflammatory, reducing the inflammation that causes the redness and swelling in acne cases. A cinnamon scrub with honey, cinnamon and avocado makes a great microdermabrasion scrub that prevents clogging of the skin pore and increased sebum production caused by microbes.

Cinnamon is an anti-fungal, anti-viral, and anti-bacterial, making it a great cold remedy. It boosts the immune system and fights pathogens that cause illness.

Cinnamon has been used to control house mites, a powerful allergen that has become a global problem, affecting over 45% of young people with asthma. Cinnamon is also a powerful anti-inflammatory, which is often the root cause of most allergies (inflammatory response).

This common spice is also a great anti-fungal. Not only does it help prevent Candida, but cinnamon essential oil can be used topically for any type of fungal infection like athletes foot.

The antimicrobial activities of cinnamon are powerful. It has been studied for its ability to stop the growth of bacteria, fungi, and the yeast Candida. Recent research has also found that this spice can also be used as an alternative to traditional food preservatives, which goes to prove its potent antimicrobial properties.

Cinnamon is one of the best spices to use to help curb sugar cravings. Aside from it acting as a great sugar substitute, cinnamon helps regulate blood sugar levels, and prevents you from reaching for those decadent sugary sweets.

Cinnamon acts as a natural diuretic, which helps flush out excess toxins and waste matter from the body, while helping purify the kidneys. This also makes it effective against urinary tract infections by helping empty the bladder at a faster rate.

The anti-cancer effects of cinnamon have been documented by numerous studies. It has been found that cinnamon extracts modulate angiogenesis (a process whereby new blood vessels form from pre-existing vessels) and function of CD8+T cells (a type of white blood cell that kills cancer cells). Cinnamon extracts have also been linked with pro-apoptotic (cell death) activity by inhibiting NFkB and AP1.

Cinnamon has been found to be effective against bad breath by killing the oral bacteria that triggers it. Here is a homemade cinnamon mouthwash recipe that works like a charm!

Around half a teaspoon of cinnamon can cut cholesterol by around 18% (LDL, or “bad”, cholesterol, that is). Consuming larger amounts could be even more effective, but of utmost importance is to reduce your consumption of cholesterol-containing foods like eggs, butter, cheese, and high-fat meats.

Cinnamon prevents the release of arachidonic acid, an inflammatory fatty acid, from the blood’s platelet membranes. It therefore stops thickening of the blood, and prevents a rising in blood pressure, which under normal conditions can damage the arteries. As mentioned above, cinnamon also helps lower LDL cholesterol, which can prevent atherosclerosis and development of heart disease.

As mentioned above, cinnamon stops platelets from thickening the blood too much, thereby improving circulation and keeping the heart healthy.

Eating cinnamon helps boost sodium benzoate production in the brain (cinnamon gets metabolized into this compound). Sodium benzoate has many brain-positive benefits, and it has been eluded that eating cinnamon may prevent many age-related neurological disorders. It acts by increasing neurotrophic factors in the brain, which stimulate the birth of new neurons and protects existing neurons – two processes required for a healthy brain.

HCA (2’-hydroxycinnamaldehyde), a cinnamaldehyde derivate of cinnamon, has been found useful against inflammatory diseases. It works by inhibiting nitric oxide production via inhibition of NF-k-Beta activation, making it a powerful anti-inflammatory agent.

Cinnamon is a great spice to help calm the stomach. It is a carminative, so it helps break up intestinal gas, prevents nausea and helps with indigestion. It can even be used for people with heartburn, as a post-meal digestive aid, and to stimulate a weak digestive tract.

Not only does cinnamon improve glucose metabolism, but it stimulates the production of natural insulin, too! One study even found that adding cinnamon to a meal can lower its glycemic index by 18-29%!