Category: > Remedies > 10 Practical Uses for Witch Hazel That Should Make it A Staple in Your Medicine Cabinet
1.3K shares 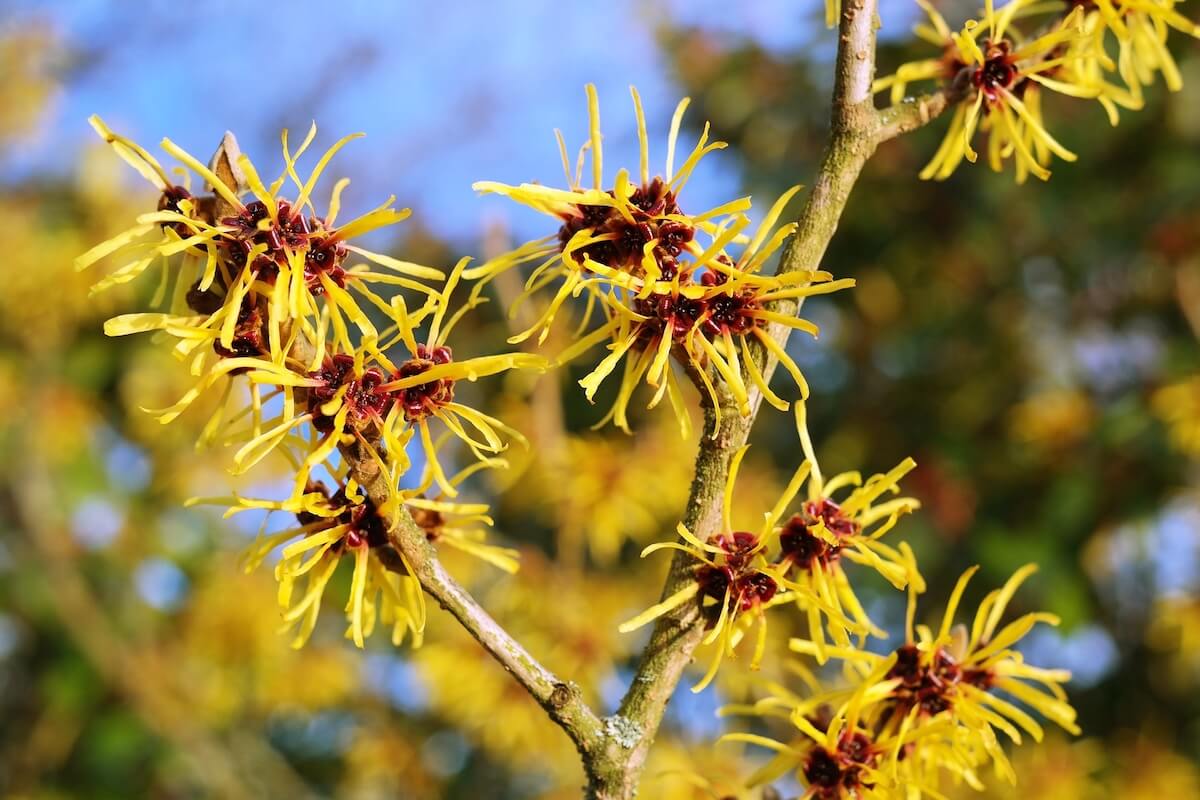 You might already be familiar with the word witch hazel, even if you haven’t bought a bottle of it yourself. It is a popular ingredient in natural skincare products, and has been used for centuries to help heal and treat acne, blemishes, sunburn, skin inflammation, swelling and even pain.

However, the uses of witch hazel aren’t just restricted to skin care. Witch hazel can also be used internally to stop symptoms from diarrhea, colds, mucus colitis, vomiting, coughing, the flu and more (1).

What is Witch Hazel?

Witch hazel is a plant member of the Hamamelidaceae family, which blooms golden flowers in the dead of winter.

Witch hazel was used by Native Americans for centuries before it became an approved medicinal plant by the Food and Drug Administration for use in cosmetics. The Osage used witch hazel bark to treat skin ulcers and sores, while the Potawatomi steamed twigs over hot rocks in their sweat lodges to soothe sore muscles. The Iroquoi brewed witch hazel tea to treat dysentry, colds, and coughs.

And now, many modern witches consider witch hazel a magical herb, using it to mend broken hearts and keep away evil (2).

How Does Witch Hazel Work?

The bark, twigs and leaves of the witch hazel plant contain volatile oils, as well as active compounds called polyphenols and tannins.

These compounds are extracted from the plant and then added to alcohol or water to make a concentrated product called witch hazel water or witch hazel extract.

The tannins in witch hazel extract are what make it an excellent natural astringent since they help remove excess oil from the skin. Witch hazel also contains high concentrations of compounds called “gallate esters,” which include proanthocyanidins, hydrolyzable tannins (galloylated sugars) and methyl gallate (3).

As a natural antioxidant and anti-inflammatory, the uses of witch hazel also include things like helping reduce the amount of free radicals that are circulating in the body, meaning it helps protect against DNA damage and tumor growth. The polyphenols in witch hazel also slow down disease development by protecting cells (4), and are some of the best anti-aging compounds out there.

Today, witch hazel is used for a variety of different purposes. Here are just a few key ways you can use witch hazel to improve various ailments.

Many herbalists recommend witch hazel for relieving discomfort and inflammation associated with varicose veins. According to the University of Michigan Health System, German pharmacological studies have demonstrated that witch hazel strengthens veins and acts as an anti-inflammatory. The natural astringent actions of witch hazel also help tighten distended veins and repair their normal structure (5).

Soak a wash cloth with witch hazel and apply to the affected area twice daily.

A 2014 study published in the Journal of Aesthetic and Clinical Dermatology found that witch hazel was one of the most effective acne treatments out of 52 tested products (6). Witch hazel can help slow down inflammation, redness, oiliness and bleeding. It helps reduce bacterial growth on the skin and helps speed up the time needed to heal infections and/or scabs (7).

With hazel contains the tannins and volatile oils which help bring down inflammation and slow bleeding – two important factors when it comes to remediating hemorrhoid symptoms. You can apply witch hazel water directly to the skin to relieve itching, irritation, bleeding and burning from hemorrhoids (8).

A study published in Chemical Research in Toxicology found that the polyphenols and tannins found naturally in witch hazel reduced the number of free radicals and stopped the growth of melanoma (cancerous) cells (9). Witch hazel also protects against other damage caused by UV light (such as accelerated skin aging due to high UV exposure). Witch hazel extract has also been shown to help protect collagen and skin elasticity, helping your skin more effectively deal with the effects of environmental stress.

The astringent properties of witch hazel helps to relieve the itch and irritation caused by poison ivy. Not only will the cooling, soothing extract get rid of the poison ivy rash, but it will calm it down and speed recovery. When applied twice daily, witch hazel can help get rid of poison ivy (or poison oak) rash within three days (instead of the standard 7-14 days).

Not surprisingly, many commercial insect repellents and products used to treat insect bites contain witch hazel. This is because witch hazel helps to reduce pain, swelling, allergies and irritations that often come with a bug bite. Some studies have found that witch hazel works just as well as synthetic chemical creams used to fight skin irritations (like bug bites) in children (10). Most witch hazel extractions also contain isopropyl alcohol, which also helps prevent infection that might come with a bug bite.

Witch hazel is a common ingredient in all-natural shampoos. Because of its astringent properties, it helps to reduce oil build up on the hair, which leaves it clean, shiny and more voluminous. It also helps with those suffering from an irritated scalp, redness, itching and inflammation. According to a study conducted by the Center for Dermatology and Disease in Zurich, Switzerland, after testing witch hazel on the scalps of 1,373 patients, their symptoms improved better than other hair products (11).

You can add several drops of witch hazel to your shampoo, or you can apply it directly to the scalp as a wash before rinsing.

Witch hazel can also be applied to areas of the body where you’ve shaved to prevent bacteria growth and infections in the hair follicles, sooth razor burn, slow bleeding from nicks or cuts, and even prevent ingrown hairs from forming.

The uses of witch hazel can also be extended to help treat ear infections. Witch hazel is an effective anti-bacterial, meaning it helps clear up bacterial overgrowth and infections within the ear. It can also help break up wax buildup, as well as dry up oil, pus and excess sweat. To treat irritations within the ear canal, insert several drops of witch hazel into the ear with an eye dropper a couple times a day.

Witch hazel contains a high percentage of tannins that contain astringent properties. For this very reason, it is useful for reducing redness, swelling and bleeding. Other evidence suggests that when applied to the skin regularly, witch hazel helps remediate symptoms associated with psoriasis and eczema (12).