Category: > Health > 10 Exotic Super Fruits You Probably Aren’t Eating (But Should Be!)
3.7Kshares 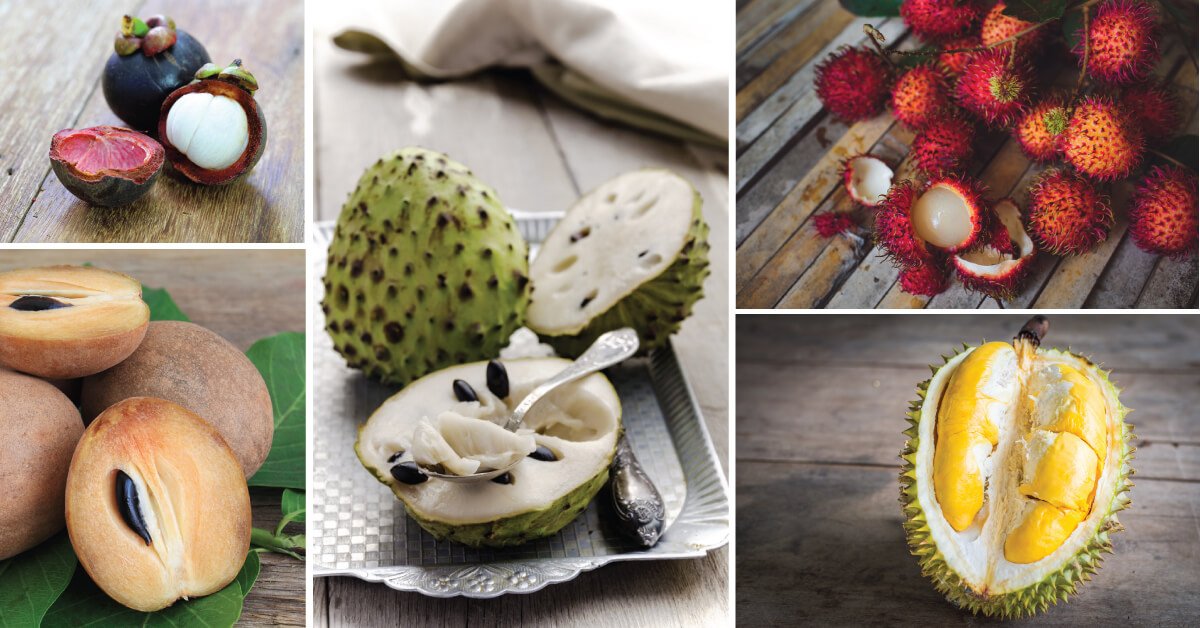 Apples, oranges, bananas, and watermelon. These are some of the fruit you commonly see browsing through the supermarket, but what about the fruit you don’t see? Although it may seem like you have a wide variety of choices, there are many exotic super fruits that you probably aren’t eating.

The world is full of amazing, delicious fruit – and on my recent trip to Costa Rica I had the privilege of enjoying just a sample of Mother Nature’s bounty.

A lot of these fruits can be found in Asian grocery stores – all it takes is a phone call and some patience. These fruits are also found throughout Central America, South America and Asia (if you ever happen to go there!).

This magical fruit that tastes like a cross between a banana and a pineapple is a must on your list of fruits to try. It is thought to be native to Ecuador, Colombia, Peru and Bolivia. I had the pleasure of trying it down in Costa Rica, and even in my home town, Winnipeg, Manitoba. The creamy texture is to die for – I could eat these endlessly if they weren’t so expensive!

This funky-looking fruit is native to Malaysia and other regions of Southeast Asia like Thailand. The outside may look intimidating, but once you get inside, you’ll be pleased to find a grape-like translucent fruit with a sweet and mildly acidic flavour that just so happens to taste like a grape too!

If you haven’t tried a biriba, then you need to get down to Costa Rica, stat! This fruit tastes just like if not better than a lemon meringue pie (the lemon filling, that is). The texture is creamy similar to that of pudding! The fruits are delicate, so once they’re picked, they need to be eaten fast (which is why they usually can’t be found in North America). These fruits are found in Central America, like Costa Rica, and also South America, like Brazil.

Regarded by many people in southeast Asia as the “king of fruits”, the durian is one incredible fruit. It is covered in spikes and has a very strong odour, but tastes like a sweet custard with a hint of almonds, and has the texture of a rich custard. Some people think the durian has a sweet fragrance, while others find the aroma revolting. The durian is found all throughout Thailand and Indonesia, but can be found throughout North America in Asian stores or even large supermarkets.

The jackfruit is a species of tree in the Artocarpus genus of the mulberry family. It is native to parts of Southeast Asia, but is thought to have originated in the rain forests of India. I’ve personally found it in Costa Rica, grown by my friend Eric on his farm Jewel of the Sun (La Joya del Sol). This massive fruit must be eaten when it is totally ripe or you’ll get mouthfuls of sticky latex. They taste exactly like juicy fruit bubblegum and have been compared to a cross between the flavours of an apple, pineapple, mango and banana.

This maple-sugar tasting fruit is native to southern Mexico, Central America and the Caribbean. However, it is grown in large quantities in India, Thailand, Malaysia, Cambodia, Indonesia, Bangladesh and Mexico. The outside of the fruit is papery and the fruit itself is pale yellow to earthy brown. It has a grainy texture similar to that of a pear, and tastes like a mix between caramel, brown sugar, and maple syrup.

One of my favourite fruits, the mamey sapote. It is native to Central America, and has even been cultivated in Southern Florida (lucky you guys!). This fruit may look ugly on the outside, but the fruit inside is a bright orangey-red hue with a texture that is creamy and soft. It tastes similar to that of a baked sweet potato, but so much better. Almost like a sweet potato mixed with marshmallows and maple syrup. They are incredibly high in carotenoids, vitamin B6 and C.

Mangosteen grow mainly in Southeast Asia, and also in tropical South American countries like Colombia. It has been studied for its incredible abilities to help prevent cancer. Once you get past the hard, dark purple exocarp on the outside, the fruit inside is bright white and tastes like a tangy, juicy marshmallow. It is slightly fibrous, but at the same time soft and supple. I’ve found them in Asian food stores around Winnipeg on occasion.

Known for its cancer-healing abilities, the soursop isn’t very sour at all. I had the pleasure of tasting it in Costa Rica and was pleasantly surprised. The fruit itself is very fibrous, and tastes similar to a pineapple mixed with strawberries and oranges with underlying notes of coconut. It is native to Mexico, Cuba, Central America, and northern South America. It looks similar to a cherimoya and is actually in the same genus as the cherimoya and papaya.

The miracle fruit is just that – a miracle. It is a bright red berry, that when eaten, makes sour foods like lemons, limes, and tomatoes taste sweet! While I was down in Costa Rica I got to try the berry and when I ate a lemon, it was sweet! Almost too sweet. This effect is due to miraculin, a glycoprotein in the berry. Miraculin is not sweet, but when the taste buds are exposed to this substance, acidic foods that are normally sour are perceived as sweet. This effect can last up to an hour!