You’re probably familiar with Johnson & Johnson family products. I remember using it as a child and well into my teen years. But what I, and many people to this day didn’t know, was that their products contain cancer-causing ingredients.

Although Johnson & Johnson labels their bath products as being “baby safe,” they have recently faced lawsuits and public outrage over their baby products and the ingredients they use.

The Environmental Working Group, a non-profit environmental research organization, describes the dangers of the ingredients used in Johnson & Johnson products. These ingredients include quaternium-15 and 1,4-dioxane.

Quaternium-15 is a formaldehyde-releasing preservative, and well-known carcinogen that causes burning sensations in the eyes, nose and throat; watery eyes; wheezing; nausea; and skin irritation. Daily exposure is linked with leukaemia and brain cancer.

In fact, the North American Contact Dermatitis Group considers quaternium-15 to be among the most clinically significant contact allergens in children.

1,4-dioxane is another carcinogen that causes vertigo upon inhalation, as well as drowsiness, headache, anorexia, and irritation of the eyes, nose, throat and lungs. It also causes skin irritation upon contact. This chemical is also a by-product of ingredients like PEG-100 stearate, sodium laureate sulphate, sodium myreth sulphate, polyethylene and ceteareth-20.

Parents were shocked when a Missouri jury recently ordered Johnson & Johnson to pay $72 million to the family of Jacqueline Fox, a woman who died from ovarian cancer that was linked to the use of talcum-based Johnson’s Baby Powder and Shower to Shower products.

Once the public became aware that these ingredients, and more, were lurking in their children’s soap and cream, parents wrote to the company demanding them to change their formulas.

In the U.S., no safety testing is required when companies are formulating new products. They’re allowed to put in whatever ingredients, and don’t even need to label every ingredient used.

As Stacy Malkan notes, “I worked with the Campaign for Safe Cosmetics, the coalition of health and environmental groups at the forefront of researching the ingredients used in personal care products. We sent hundreds of products to labs to find out if they contained compounds not listed on labels; many did…two years later, after we reported that Johnson & Johnson was selling formaldehyde-free versions of their baby products in Europe and other countries, the company announced they would reformulate their products worldwide to remove the ingredient and others of concern.”

The Campaign for Safe Cosmetics urged consumers to boycott Johnson and Johnson until they complied.

“We have been phasing out the use of preservatives that release tiny amounts of formaldehyde to guard against bacterial contamination. These preservative technologies, which are used widely in our industry are all safe and approved in the countries where they are sold…Over the past couple of years, we already have reduced the number of formulations globally with these ‘formaldehyde releaser’ preservatives by 33% and in the U.S. by over 60%.

We are completing this reformulation as quickly as we can safely and responsibly do so. As part of the manufacturing process, we have extensive monitoring to ensure that the amount of a trace byproduct known as “1,4 dioxane” in any of our products is well below the level that the U.S. Food and Drug Administration and regulatory agencies around the world consider safe.

…We have introduced new product formulations for consumers who prefer natural products, such as JOHNSON’S® NATURAL®, a line that is 98% natural, and contains no formaldehyde releasing preservatives or traces of 1,4 dioxane.”

Although their statement is promising, this new line of baby products is too little, too late, and cost twice as much as other products produced by the company. Would you trust a company to produce safe products, when they’ve been lying for decades? I wouldn’t.

If you take a current look at the ingredient lists on J&J products, they still contain ingredients that may contain harmful impurities that can cause cancer like 1,4-dioxane. Not only that, but these ingredients are still found in baby products.


What Ingredients Does Johnson & Johnson Still Use?

A quick search of Johnson & Johnson baby products shows that their products aren’t what they’re lived up to be.

Phewf! That is quite the list. But if you notice, many of these ingredients repeat themselves in every product (which makes me question why they have so many different lines, when the difference is almost nill).

Let’s take a quick look at some of these ingredients (those highlighted in red):

– Cocamidopropyl Betaine: a surfactant; it has been associated with irritation and allergic contact dermatitis, reactions that could be due to the ingredient itself or to impurities present in it, such as 3-dimethylaminopropylamine (1).

– PEG-150 Pentaerythrityl Tetrastearate: an emulsifier and thickening agent; may contain harmful impurities like 1,4-dioxane and ethylene oxide, which are known human carcinogens (3, 4).

– PEG-150 Distearate: an emulsifier and thickening agent; not easily absorbed by the skin but assists other chemicals to enter the skin barrier (so if other chemicals are present in the product that are not designed to enter the skin and bloodstream, then you’re putting your health in danger). Can also contain harmful impurities like 1,4-dioxane and ethylene oxide as mentioned above.

– Parfum: fragrance; the word “fragrance” or “parfum” on the product label represents an undisclosed mixture of various scent chemicals and ingredients used as fragrance dispersants such as diethyl phthalate. Fragrance mixes have been associated with allergies, dermatitis, respiratory distress and potential effects on the reproductive system (9).

– Ethylhexylglycerin: preservative; although generally considered safe, it has been found to be an irritant to the skin in two studies, causing allergic contact dermatitis: A Belgian study by the Department of Dermatology at the University Hospital and a study in the Contact Dermatitis Journal.

– Disodium EDTA: metal chelator; clinical data indicates that disodium EDTA is not well absorbed by the skin, however, it has been shown to enhance the dermal penetration of other ingredients contained in a product. Thus, when combined with other harmful ingredients, may increase the chance that these ingredients get absorbed into the bloodstream.

– Glycol Distearate: increases thickness of a product to give it that pearl-like look; made from ethylene glycol, which is used to make antifreeze, de-icing solutions for cars and planes, hydraulic brake fluids, lacquers, resins, wood stains, synthetic waxes, and the like. Though small amounts aren’t likely to harm your health, it’s still doesn’t seem like putting a chemical like this (mixed with animal or vegetable fat) will benefit your skin, does it (11)?

– Laureth-4: surfactant; laureth-4 is a synthetic polymer composed of lauryl alcohol and PEG (polyethylene glycol). Due to the presence of PEG, this ingredient may contain potentially toxic manufacturing impurities such as 1,4-dioxane (12).

According to these results, it doesn’t seem like these products are safe to use on children (let alone anyone). So for anyone asking whether their products are still safe to use, even though they got rid of a few hazardous ingredients…No. They are not.

You might have also noticed that some ingredients have an astericks next to them, meaning they are “naturally derived” – that doesn’t mean anything if the product is so chemically manipulated that it becomes harmful.

Not Only Johnson & Johnson

As a popular company, Johnson & Johnson is in the spotlight, however, many companies use harmful ingredients in their products, many of which you may use on yourself, and/or your children.

In fact, the Environmental Working Group states that over 82% of children are exposed every week to one or more ingredients with potential to harm the brain and nervous system. Not only that, but over 80% of children’s products that are marked as “gentle” and “non-irritating” actually contain ingredients linked to allergies and skin/eye irritation.

And while Denmark, Finland, Japan, the Netherlands, Norway, South Africa, Sweden and the U.K. have access to safer products, Johnson & Johnson still insists on providing American families with carcinogenic-laden soaps.

My favourite motto is that if you can’t eat it, you shouldn’t put it on your body – especially a baby’s body.

A child’s skin is 30% thinner than an adult’s. This means that children can absorb up to 10 times more chemicals from bath products than their parents. This is why it is so important to only use products that chemical and toxin-free.

One of my favourite body moisturizing products is jojoba oil, a neutral oil that absorbs well and leaves the skin feeling silky smooth. Coconut oil is also great for helping get rid of rashes. Raw Elements also makes a sunscreen that can be safely used on children and adults.

If you’re looking for a natural shampoo, the one that I use is by Carina Organics. It is free of synthetic fragrances, petroleum, parabens, preservatives, propylene glycol, and toxins. 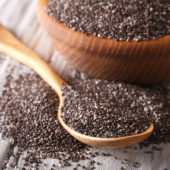