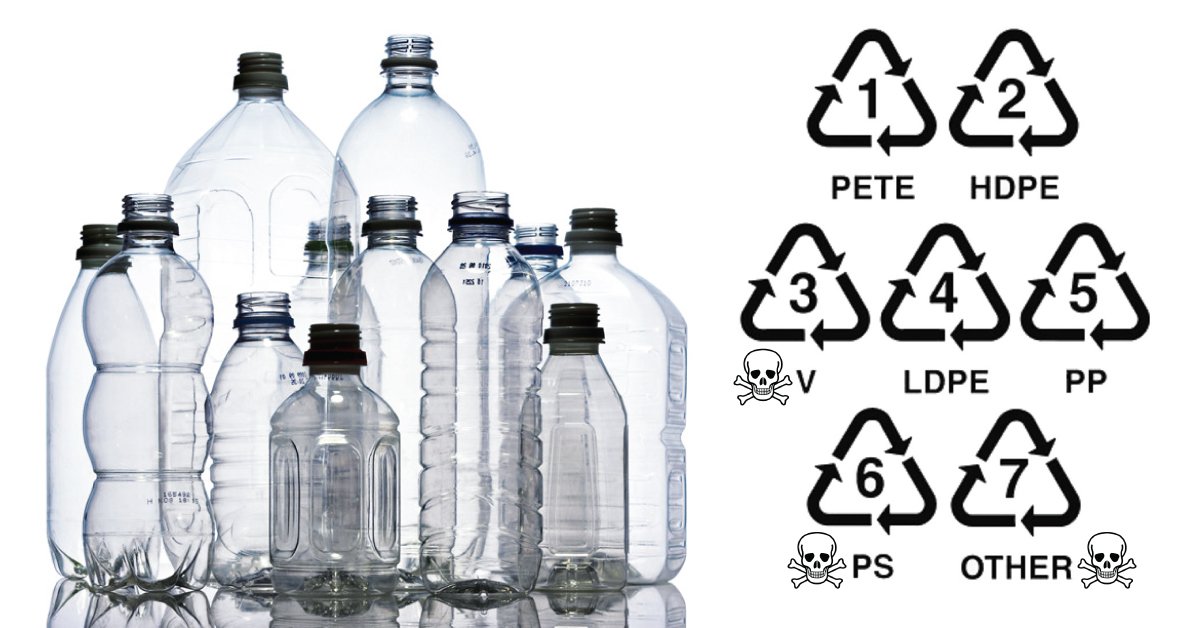 I remember when my sister mentioned to me a few years ago the numbers on the bottom of plastic packaging. At the time, I consumed a lot of different products in plastic packaging, from bottled water (every so often), to processed vegan “junk food.” I didn’t think much of it, but now that I realize the dangers of certain numbers, I really should have been paying more attention.

There are 7 numbers (1 through 7) that may appear on the bottom of plastic bottles and food containers, which with some numbers, should be avoided at all costs. They are technically called “resin identification codes,” and appear inside a little recycling symbol (they’re hard to miss, really). The most toxic plastics are #7, #3, and #6.

If possible, try to avoid plastic packaged products, including plastic water bottles (which are horrible for the environment, might I add). Use reusable shopping bags for groceries, use a reusable water bottle or coffee mug, store foods in glass jars instead of plastic containers, avoid disposable utensils and bring reusable glass containers to restaurants in case you need to take your food to go.

Numbers On Plastic Packaging – What You Need to Know

Here is a list of these 7 numbers, what they mean, and which ones are most hazardous to you:

PET (or PETE) plastic does not contain BPA and is generally considered safe, however it can leach a toxic metal called antimony, which is used during the manufacturing process of PET plastic. The rate of leakage increases with temperature (which is why you should never drink water from a plastic water bottle that’s been sitting in the sun all day).

Antimony can cause acute and chronic health issues like diarrhea, vomiting and stomach ulcers, according to the U.S. Center for Disease Control (CDC). Antimony dose increases the longer the bottle or container has been sitting (like on a shelf, or in a fridge, for example). The amount of antimony leeching from these bottles also differs based on exposure to sunlight, higher temperatures and varying pH levels.

HDPE is considered a low-hazard plastic, but a recent study has suggested that all plastics (including HDPE) release estrogenic chemicals, which could cause health problems, especially in pregnant women. They found 95% of plastic products to test positive for estrogenic activity, meaning that they have the potential to alter the structure of your cells, and pose a huge risk to infants and children.

PVC is a pretty toxic plastic. It contains the phthalate, DEHP, a toxic chemical that disrupts the endocrine systems of wildlife, causing genital deformations, low sperm counts, testicular cancer and infertility in species like deer, polar bears, whales and otters.

Phthalates have been found to be linked with asthma in children, and can have a negative effect on the immune system.

LDPE is a low-hazard plastic, with little concern, other than the possible effect of leaching estrogenic chemicals (like HDPE).

PP is another low-hazard plastic, but one study found PP-made laboratory plasticware to leach at least 2 chemicals.

This plastic has the ability to damage your nervous system and cause cancer, thanks to the leaching of styrene into your food. The level of styrene that leaches into your food seems to be temperature-dependent, so avoid using disposable cups and take-out containers for hot beverages or hot food – instead, use a re-usable cup or bring glassware when eating out, in case you want to take your food home.

One of the worst plastic types, plastic number 7. These plastics almost always contain the hormone-disrupting chemicals bisphenol-A or S (BPA or BPS). These endocrine disruptors mimic or interfere with your body’s hormones and can cause issues in humans, children and fetuses. In the case of a pregnant women, BPA or BPS can cause spontaneous miscarriages, chromosomal errors in the fetus, and genetic damage. In the case of adults and children, these endocrine disruptors can lead to early puberty, disrupted reproductive cycles, reduction in sperm quality, ovarian dysfunction, cancer and heart disease.

Just one week of using plastics under the label “7” can increase urinary BPA concentrations by up to two-thirds. This plastic type has also been linked to obesity and insulin resistance, and may be present in over 95% of adults.