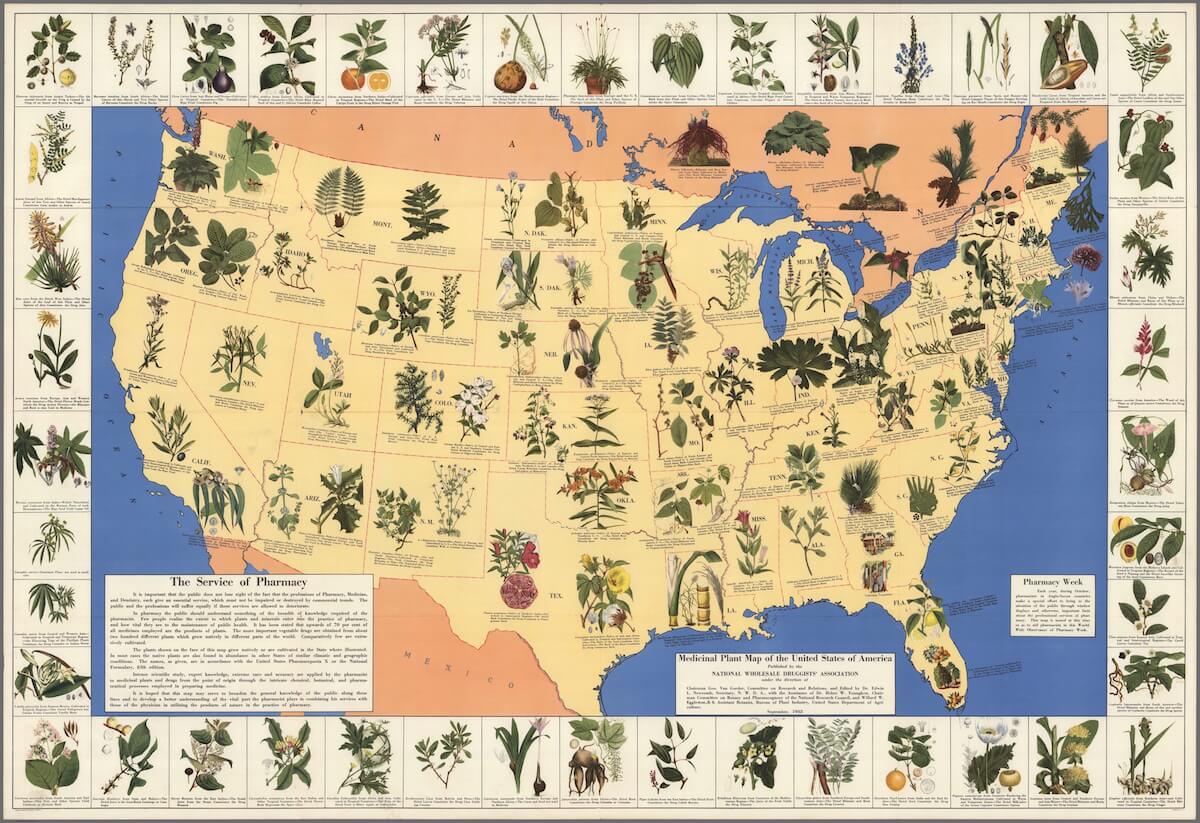 Plant-based medicinal cures have been around far longer than we can imagine. Back in the day, we had synergistic relationships with these plants, such that we understood them, their uses, and how to utilize them for curing and/or healing various ailments.

In fact, most of the pharmaceuticals you see on the shelf today are derived from plants themselves. There’s a reason why 25 percent of the active ingredients in cancer drugs are found only in the Amazon (1).

With that being said, only about 10 percent of plants in the Amazon rainforest have been studied for their medicinal properties – and perhaps it should be kept that way. The practice of searching out medicinal cures in the Amazon (when we have our own local plants to provide similar curing potential) is highly destructive, not only to the plants, but to the Indigenous peoples who live there.

While pharmaceutical companies continue to distort medical science in order to push their products by and large, physicians and other medical professionals are finally starting to speak out.

“It is simply no longer possible to believe much of the clinical research that is published, or to rely on the judgment of trusted physicians or authoritative medical guidelines. I take no pleasure in this conclusion, which I reached slowly and reluctantly over my two decades as an editor of the New England Journal of Medicine (2).”

Dr. Angell isn’t the only physician who holds this stance. Dr. Richard Horton, Editor in Chief of The Lancet, states that “much of the scientific literature, perhaps half, may simply be untrue (3).”

Arnold Seymour Reman, Harvard Professor of Medicine and Former Editor-in-Chief of the New England Medical Journal, is also on board:

Plants and Their Healing Abilities

For example, mangosteen, soursop, and cannabis have all been found to effectively treat and eradicate cancer cells, all while leaving healthy cells alone.

While studies continuously provide promising results, it is rare that clinical trials are ever conducted to test these plant cures in real-life situations, with actual people who suffer from disease. Clinical trials are costly, and more often than not, the government isn’t willing to fund studies that are based around natural cures. It is usually the case that pharmaceutical companies end up funding clinical trials, and as we all know, pharmaceutical companies aren’t willing to fund trials for substances that don’t come manufactured in drug form.

Plain and simple, pharmaceutical companies fund research and clinical trials for drugs they manufacture themselves, and nothing else.

Fortunately, nature can’t be patented, and so going into the bush or local health food store to find these remedies ourselves isn’t going to be too costly, and won’t be modified to the degree that pharmaceutical companies do to create a drug of their own (aka. 1% plant compound and 99% chemicals).

There is no surprise that marijuana made it to a pharmacy map that was released in the 1930’s, depicting the kinds of plants you could expect to find in pharmacy medication at the time.

The map below was printed by the National Wholesale Druggists’ Association, and serves as an amazing reminder of what people used in the past to heal their diseases and ailments. Back then, medicine was one hundred percent natural, and people understood that healing took time.

The map itself states under the heading “The Service of Pharmacy”:

“It is important that the public does not lose sight of the fact that the professions of Pharmacy, Medicine, and Dentistry, each give an essential service, which must not be impaired or destroyed by commercial trends. The public and the professions will suffer equally if these services are allowed to deteriorate. In pharmacy the public should understand something of the breadth of knowledge required of the pharmacist. Few people realize the extent to which plants and minerals enter into the practice of pharmacy, and how vital they are to the maintenance of the public health. It has been stated that upwards of 70 percent of all medicines employed are plant products.”

When the 1938 Food, Drug & Cosmetic Act was passed, medicine as we know it changed quite dramatically. Federal regulations were put in place that soon governed the production of new medicines. Knowledge of herbal remedies was lost and shunned – to this day herbalists are labelled as “quacks” by the pharmaceutical industry.

Fortunately for us, as we re-earth this knowledge, resources such as the map below become available to us.

Click HERE to view the large, poster size version of this image. Or click the image below. 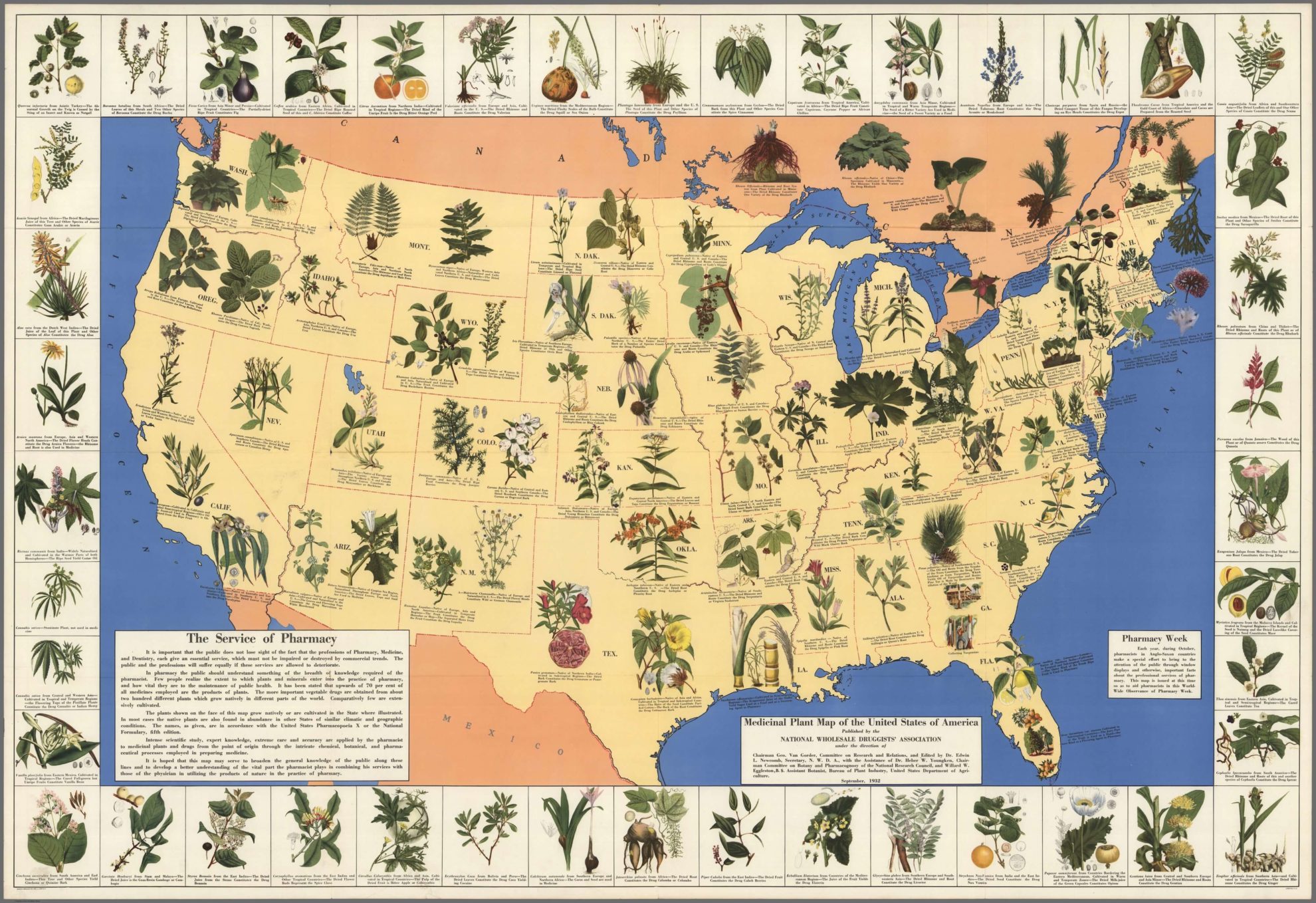