Category: > Remedies > The Deadliest OTC Pain Killer Is Still In Your Medicine Cabinet. Use These Natural Alternatives Instead.
462 shares 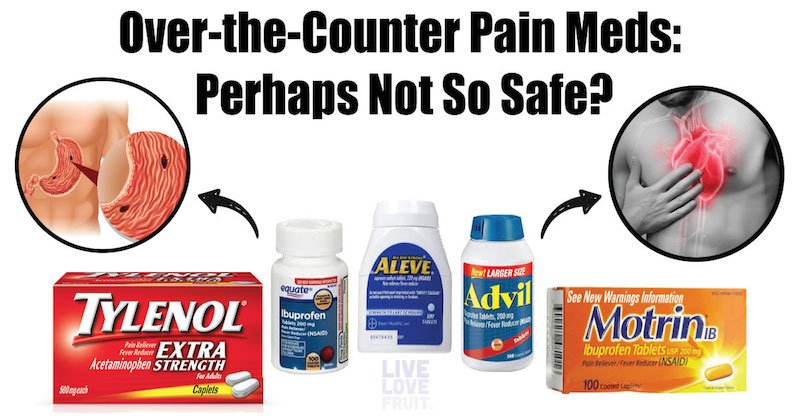 Think about the last time you had cramps, muscle pain, arthritis pain, muscle soreness, or a headache. Did you relieve the pain naturally, or with an over-the-counter (OTC) pain killer? My guess is the former.

In fact, prescription and OTC medications are the most commonly abused substances by Americans 14 and older, says the National Institutes of Health (NIH) organization (1). The most common of these OTCs are a group of painkiller drugs known as non-steroidal anti-inflammatory drugs or NSAIDs.

NSAIDs range from things like ibuprofen (Advil, Motrin), aspirin, and naproxen (Aleve). They work by inhibiting enzymes called cyclooxyrgenase 1 (COX-1) and 2 (COX-2). The activity of COX-1 and COX-2 in the body results in the production of prostaglandins, hormone-like substances that promote inflammation and enhance the perception of pain. NSAIDs therefore work by fighting inflammation and the pain associated with it (2)

There are also acetaminophens, such as Tylenol, which are also used to treat pain as well as fever. Acetaminophens are often combined with other active ingredients to treat allergy, colds, the flu and insomnia.

The Problem with NSAIDS and Acetaminophen

As a society, we have been programmed to simply reach for a bottle of pills to help with our aches and pains. Even children are given pain killers from the time they are infants. However, study after study has shown that our overuse of these pain killers is dangerous.

In July 1998, The American Journal of Medicine stated: “Conservative calculations estimate that approximately 107,000 patients are hospitalized annually for nonsteroidal anti-inflammatory drug (NSAID)-related gastrointestinal (GI) complications and at least 16,500 NSAID-related deaths occur each year among arthritis patients alone.  The figures of all NSAID users would be overwhelming, yet the scope of this problem is generally under-appreciated.”

In March 2016, Science Daily published a study that suggested new safety guidelines for NSAIDs. In particular, they recommended that “When doctors issue prescriptions for NSAIDs, they must, in each individual case, carry out a thorough assessment of the risk of heart complications and bleeding. NSAIDs should only be sold over the counter when it comes with an adequate warning about the associated cardiovascular risks (4).”

Acetaminophen (aka. Tylenol) is also quite harmful to the body, with side effects including nausea (up to 34% of users), vomiting (up to 15%), abdominal pain, diarrhea, constipation, heartburn, and enlarged abdomen (5).

There is also the case of a 5-month-old infant who died after medical staff decided to give her Tylenol for a fever. She fell into a coma and passed soon after from liver failure (6).

Annually, acetaminophen overdoses end in 78,000 emergency room visits, 33,000 hospitalizations, and more than 150 deaths, reported The Huffington Post. It has caused more harm than any other over-the-counter pain reliever. The FDA and McNeil are aware of these statistics, and yet have failed to implement the proper measures to protect the consumers.

With all of these warnings and studies, it is well past the time we start looking for safer alternatives to pain killers. Luckily, Mother Nature has had our backs since the beginning of time.

These herbs and remedies have been shown to be as effective as NSAIDS and even more so in some cases (and without the nasty side effects). One thing I would like to mention about fevers, however, is that in a large majority of the cases, we should just sit out a fever. The reason we get a fever to begin with is so that our body can heat up to a temperature that can fight whatever bug or virus is lurking inside us.

Most fevers do not get higher than 104ºF – if they do, then I’d consider utilizing yarrow tea to bring it down (or an OTC if critical). More often than not, however, your body does have the ability to fight off the infection, you just need to give it rest, and the immune system will do the rest.

Turmeric has been widely studied for its ability to reduce inflammation and pain (7). To increase the effectiveness of curcumin (the active agent in turmeric), combine it with piperine (the active ingredient in black pepper). Taking 400-600 mg of curcumin three times a day is plenty when trying to battle inflammatory-related pain.

Kratom isn’t as widely known, but it is a great way to help treat pain, anxiety and depression (8). Because of the variety of alkaloids within different strains of kratom, all krater for pain relief is not equal. The best strain for pain relief without interference on energy levels (which other kratom strains can produce) is the Malaysian strain. I like to use the brand Kraken Kratom and take it at night as a tonic, using just a teaspoon or less in a cup of warm water.

White willow bark was originally used as the active ingredient (salicin) in aspirin, before ingredients changed. White willow is very effective for treating headaches and inflammation without any nasty side effects (9). It is recommended to take 120-240 mg standardized salicin every 3-4 hours or turn the dried herbs into a tea. Avoid using this in children, however, as there can be a risk of Reye’s syndrome.

This herb is a great fever remedy, and is an all-natural anti-inflammatory, helping with general pain and joint stiffness. It relaxes blood vessels in your brain and prevents constriction, which is also great for treating headaches and migraines. According to several studies, feverfew can both treat and prevent migraines (10). You can make feverfew tea, or take a daily dose of 125 mg dried feverfew, which contains at least 0.2% pathenolide (natural active ingredient in feverfew).

Ginger has been used as an anti-inflammatory for centuries. It contains gingerol, a powerful active compound that can help stop the production of inflammatory compounds. It has been found effective against inflammation, rheumatism and osteoarthritis (11, 12), and works just as effectively as most painkillers. My favourite way to consume ginger is by juicing it, or sticking it in a smoothie. I juice up to 4 inches of ginger at a time on some days!

Capsaicin, a compound found naturally in chili (cayenne) peppers, helps dampen the activity of substance P, which normally transmits pain signals to the brain. It has been used effectively as a topical agent to soothe nerve, muscle and joint pain, but it has also been found useful as an oral formulation, which can help treat arthritis, bursitis, tendonitis, and other inflammatory conditions (13).

CBD oil, CBD chewing gum, or CBD pain patches all work by reducing the inflammatory response in the body and alleviating pain. CBD works to relieve pain by attaching to cannabinoid receptors on peripheral nerves, and then blocking pain signals from reaching the brain. And no, you won’t get high by using CBD oil, chewing gum or pain patches. CBD is legal in all 50 states.

This herb, as scary as it sounds, is actually quite useful for remediating pain in the body. It contains a group of anti-inflammatory compounds called iridoid glucosides that include harpagoside (it’s active compound). Studies show that Devil’s Claw is especially effective for back pain and arthritis (14). When purchasing supplements, always look for ingredients that include harpagoside. Take 50-100 mg of harpagoside daily, or 400 mg dried devil’s claw herb. People with stomach ulcers should consult with their doctor before consuming.