Category: > Health > Three New “Non-Browning” GMO Apples Are Now In Store! Here Is How To Avoid Them…
333 shares 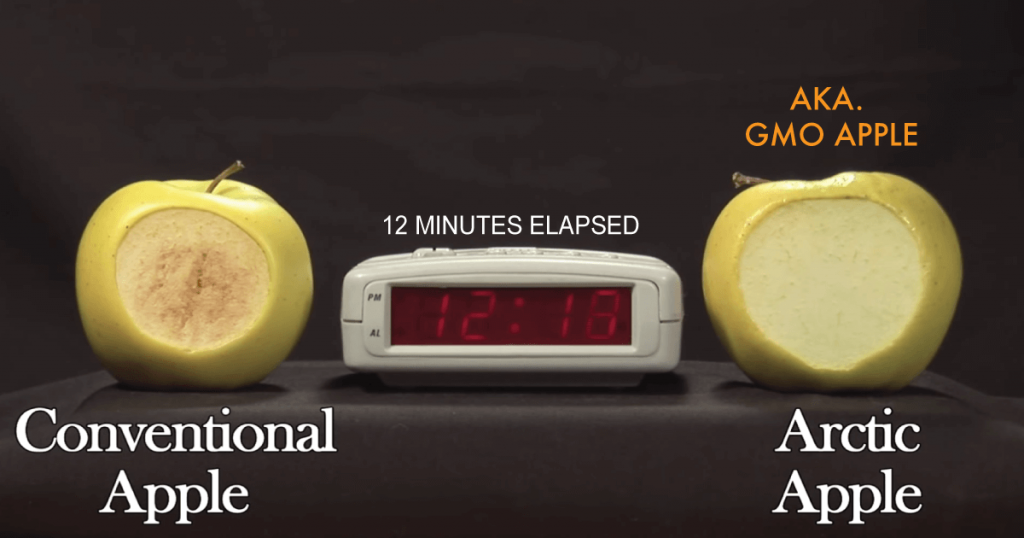 The first genetically-modified apples will go on sale in the US next month, according to agricultural site Capital Press.

These GMO apples are produced by Okanagan Specialty Fruits and sold under the brand name Arctic Apples. However, the question is why this company is allowed to market a new variety of gmo apples, without telling people the real reason as to why they are so “special” in the first place.

“We are selling it under the Arctic brand and we’ve had a lot of press and attention, so I assume most people will know what it is,” company founder Neal Carter said (1). This means that the fruit will not be explicitly labelled as a GMO product, however, if individuals choose to scan the QR code on the packaging, they’ll be able to find out.

Neal Carter states that “most people will know what it is,” however, this is far from the truth. Nobody will know what it is. People don’t just walk around stores carrying around a QR scanner to find out if their food is safe. Although there are apps for phones, this is still a round-about way to make people buy your product. If there isn’t any GMO warning label on the product, people are likely going to buy it without going ahead with scanning the product (I mean, who really knows about scanning codes on produce anyway?).

If you want to keep your diet free of genetically modified ingredients, you should look out for four different apple varieties.

The FDA claimed that the apples were fit for human consumption a month after they were approved for sale in February 2015 by the Department of Agriculture.

The apples sold presently, are going to be sliced and packaged, and then shipped to 10 unnamed stores in the Midwest that will be stocking them. Because the apples are going to be pre-sliced, they’ve been genetically modified to prevent their flesh from turning brown (aka. prevent oxidation).

It is unsure yet as to when Arctic Apples is going to market the whole fruit opposed to packages of sliced apples, however, it’s likely very soon.

I guess sliced apples is more of a convenience than anything. I mean, who doesn’t have time to bite into an apple or quickly chop one into fours? According to Neal Carter, “a whole apple is too big of a commitment (2).” Really?

As we all know, or have experienced in life, cutting or biting into an apple will often leave the exposed flesh turning brown. When the sliced or bitten apple is exposed to oxygen (air), polyphenol oxidase (PPO) enzymes in the chloroplasts of the apple rapidly oxidize phenolic compounds naturally present in the apple tissues (3).

And this is exactly what has been modified out of the apples. The enzyme polyphenol oxidase has been silenced at the genetic level (4). Why is this bad?

Polyphenols are actually quite beneficial for the human body and are there for a reason. They weren’t meant to be taken out by any means. Apple polyphenols have been found to strengthen the immune system and prevent cancer. They have the ability to induce apoptotic cancer cell death, protect from disease, inhibit cell migration and invasion (such as with cancer), and reduce cell proliferation in tumours (5).

Silencing these polyphenols out of apples at the genetic level isn’t good for anyone. That, in addition to the fact that genetically modified foods have been deemed unsafe for human consumption, backed by a variety of different studies, proves that keeping these foods out of our bodies should be made a priority.

How To Avoid The New GMO Apples

Retailers, food service, and quick-serve restaurants have all expressed interest in using GMO apples, which means that many people eating out will come across these apples (1).

If you want to avoid these GMO apples, here is what you need to do:

– Buy certified organic or Non-GMO Project Verified whenever possible, or from a local farmer who you trust and have good relations with
– Avoid buying anything unlabeled or pre-sliced apples, such as those in cafeterias or kids’ meals
– Do not buy anything labeled “Arctic,” which has an QR scanning code on it